The Delaware Riverkeeper Network is supposed to be a 501(c)3 charity. It is, in reality, a political action group financed by the William Penn Foundation and other elitist trust-funders. It’s fundamental purpose is to lay the foundation for land grabs up and down the Delaware. It’s focus is fighting oil and gas and other development everywhere, as such development presents a distinct obstacle to its “strategic parkification” plans.

The Delaware Riverkeeper personified, of course, is Maya van Rossum, who is assisted by her Deputy Executive Director, Tracy Carluccio, the sister of the long-time chair of the organization and its effective representative on the New Jersey Highlands Council. The whole thing is very much an inside operation. Moreover, the organization is essentially now serving as the personal weapon of these two individuals to pursue their own NIMBY and radical de-growth agendas as they lend a hand to the efforts of the NRDC gang and the Haas family to make a wilderness of much of the region; the Delaware River merely being the excuse to attract funding for these sundry activities.

The larger picture as it relates to the making of that wilderness is one addressed many times here. Today, I want to focus on the Delaware Riverkeeper’s use of her tax-exempt charity to pursue pet causes in her own backyard that have little or nothing to do with the mission of the organization and arguably work against it.

What brought this all to mind was a note sent to me by a long-time friend and reader about something called the Bishop Tube case. I’d not previously heard of it but it’s about a   hazardous site in East Whiteland Township, Chester County, Pennsylvania, where stainless steel tubes were once manufactured. There have been continuing efforts over several years to clean up and reuse the site. There is extensive background from Pennsylvania DEP here, here and here. 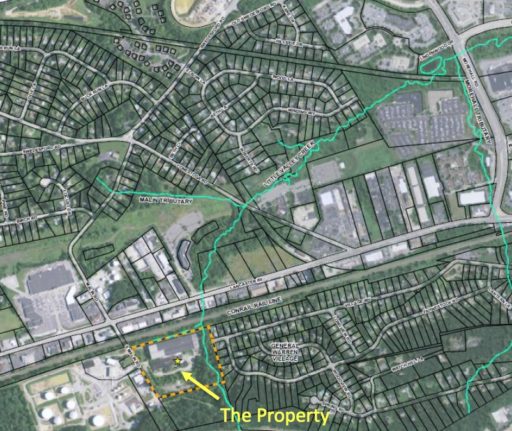 There is still cleanup work to be done on the Bishop Tube site and there is a residential developer name Constitution Drive Partners (together with O’Neill Properties Group) who proposes to work with the Chester County Economic Development Council to obtain an Industrial Sites Reuse Program grant from the Commonwealth to excavate the most highly contaminated areas of the property, transport these contaminated soils to an off-site disposal facility, backfill the areas with clean soil and develop 228 townhouses on it.

What could be better, especially given the fact the site is already adjoined by extensive residential development, as the above photo illustrates? Isn’t clean-up and redevelopment a great outcome? Who doesn’t want the site cleaned up, the hazardous stuff removed, the groundwater and the nearby Little Valley Creek (an “Exceptional Value” tributary of the Delaware River, which is about 20 miles away).

Well, not according to the Delaware Riverkeeper, who lives only a few miles away and is now embroiled in fighting the project and challenging everything, using her organization as the front. She’s trying to use the Robinson Township fracking case as leverage to turn the Pennsylvania’s Environmental Rights Amendment into a club to beat us all into de-growth. Her voluminous comments to DEP reveal what it’s all about; simply stopping any redevelopment of the site as she claims “removing the trees in order to accommodate this massive development project will inflict further environmental and community harm.” She wants the site to be “open space” which, of course, attracts the support of the NIMBY residential neighbors who want no more neighbors.

It’s this sort of obstruction and destructive behavior that has caused O’Neill Properties to sue the Delaware Riverkeeper in the Chester County Court of Common Pleas. Maya is screaming and gets lots of free press courtesy of her sister entity, StateImpactPA which is, of course, also funded by the Haas family. It’s all projection on her part, though, and one hopes O’Neill will be successful. The real issue, though, is what this NIMBY matter has to do with the mission of the Delaware Riverkeeper Network, her 501(c)3 charity. The connection is tenuous at best. Do small donors and supporters realize what she’s doing with her money—fighting residential development and slowing down cleanup of a hazardous site that is certainly more of a threat to the Delaware than those new townhouses? One suspects not.

Moreover, this isn’t the first time the Delaware Riverkeeper has used her organization to oppose development in her own backyard. I wrote about her home town of Radnor a while back to report on how she was leading a campaign against the use of the Roundup® herbicide on a farm near her, despite the fact she was willing, as the Delaware Riverkeeper, to recommend it for use along the Delaware.

Then, there was this from my investigation of who the Delaware Riverkeeper really is:

Van Rossum has also been heavily involved in some stormwater planning in Radnor Township and, of course, wherever she goes controversy follows. The Township created a Stormwater Management Advisory Committee a few years ago following a devastating flood and, having long desired to secure funding for a pet project of hers called the West Wayne Preserve, Maya managed to obtain a seat on the committee, perhaps with the thought some of the revenue from a stormwater management fee might go to that project. She used the Delaware Riverkeeper Network organization as a vehicle to advocate for this 6.3 acre suburban park, although it hardly qualifies as a high priority issue for anyone outside of Radnor or even as a significant contribution to stormwater management.

The other members of the Stormwater Management Advisory Committee apparently had different ideas on how to best spend their stormwater management (things such as actual stormwater improvements) and Maya abruptly resigned this Spring when she didn’t get her way. That, though, wasn’t the end of it as she then launched a war against the committee and the township, filing under open records laws for copies of e-mails among committee members. She did so as an individual but, of course, the news reports would lead one to believe she spoke with the gravitas of being THE Delaware Riverkeeper.

And, there’s also this from the Intelligencer:

The Delaware Riverkeeper Network filed a lawsuit Thursday that could delay PennDOT’s plan to demolish and replace Headquarters Road Bridge in Tinicum.

The full story is behind a paywall but the gist of it is that public safety demands removal and replacement of a bridge needed by emergency services and others to reach various parts of this community quickly. Maya has sued, though, insisting environmental concerns are more important and that it doesn’t matter if no one had the extra funds to properly repair the existing structure, as I read her position. 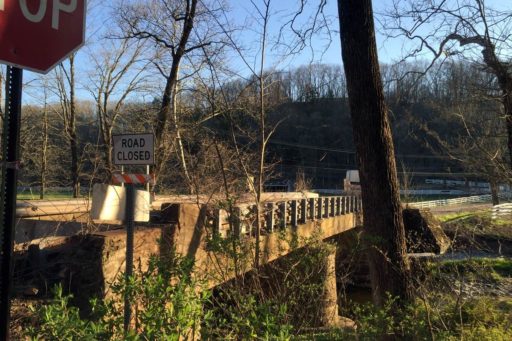 Her explanation on the Delaware Riverkeeper website again uses the Exceptional Value classification of the Tinicum Creek as leverage to argue nothing should change and that the area should be stuck with an historic but inadequate bridge. It’s all about NIMBYism and stopping growth using the “Exceptional Value” trap as she employs her charity that’s supposedly all about the Delaware River for street cred and legal leverage.

There’s a pattern of abuse here. The Delaware Riverkeeper Network is engaged in a campaign of NIMBYism as part of a larger de-growth agenda financed by big-times elitists under the cover of a tax-exempt charity. Opposition to natural gas development wherever it is proposed is just another part of that agenda. We’ll have a lot more to say about it, other members of the group and phony organizations such as the Highlands Council in future posts.