The death of real journalism and the rise of advocacy journalism is marked not so much by what is said but, rather, by what is not said. That is Tom Wilber.

Imitation is the sincerest form of flattery we’re told and Tom Wilber, a “reporter” with the Binghamton Press & Sun-Bulletin must have envied Candy Woodall for getting the ability to whack the gas industry multiple times in that poorly done PennLive series, because he’s now doing one of his own.

I’ve only met Tom Wilber once and that was at a Vera Scroggins court hearing in the Susquehanna County Courthouse. He briefly introduced himself as we walked down the stairs and then hustled off like a rock star groupie so as not to miss a word of what his favorite fractivist had to say to the gathered throng of like-minded malcontents. He’s an engaging guy on a superficial level until you realize he’s not listening to anything you say and only interested in what might fit his template for the day.

Tom Wilber’s template, of course, is the same every day. He has a sneering contempt for the natural gas industry and a condescension toward others he supposes aren’t nearly as clever as himself; folks he believes have been conned, but the conning all comes from his pen and what he writes and doesn’t write. The most important story in his new series is what is left out, not the least of which is the fact Tom Wilber has never liked gas and has a blog and a book to prove it, both of which are relentlessly anti-gas. 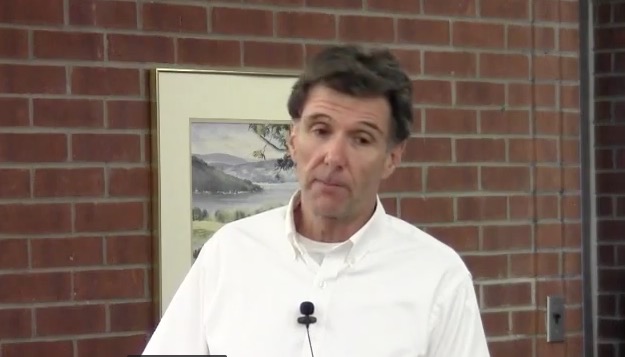 Tom Wilber – Click to play video of Wilber speaking in Penn Yan in 2013. Go to 1:02:00 to see and hear what he really thinks about natural gas and environmental organizations who dare to work with the industry.

The Binghamton Press & Sun-Bulletin series is a three-part one, we’re told, but if the first article in the series and an accompanying shorter piece are any indication, Wilber should get a Pulitzer for creative writing around what’s left out; what he failed to do. That begins with a missing half billion dollars (that’s $500 million for those of you living in Binghamton and imagining the Press has something objective to say). Here’s what Tom Wilber writes:

Jobs were now becoming scarce, however, as Cabot began $500 million in cutbacks in capitol expenditures in Susquehanna County due to a market glut and falling natural gas prices.

This is how fractivist “reporters” distort the story and turn it upside down. All Tom Wilber tells his readers is that Cabot has cut $500 million from it’s capital budget (and, yes, it’s capital, not “capitol,” Tom), leaving the unmistakable and intended impression the industry has died and the corpse is rotting. What Wilber doesn’t tell his readers is this; Cabot is still spending $900 million and roughly a half billion dollars of that is in Susquehanna County. If you think a cool half-billion doesn’t matter in a county of roughly 50,000 people (that’s $10,000 per person), you’re either daft or have an agenda. Tom Wilber is not daft. Rather, he’s too clever by half.

One wonders what Binghamton might do to get a half-billion of investment. Hell, one wonders if the Gannett newspaper chain couldn’t use a half billion. It sure hasn’t had a lot of success with pretend journalism, shedding jobs faster than a Beagle leaves hair on the living room carpet, if this story is any indication.

That isn’t all Tom Wilber has left out. He also quotes a farmer by the name of Walter Brooks, who is chagrined by the fact he signed a lease for $25 per acre before the market went way up and landowners started getting many times that much.

Walter Brooks, of Springville Pennsylvania, was on the front line of the Marcellus gas rush. He was among the first owners to be approached by landmen, the first to lease his land, and the first to experience the consequences.

In 2006, Brooks, thinking nothing would come of it, signed a standard industry lease that gave Cabot Oil and Gas of Houston Texas mineral rights to his 212 acres for just $5,300, or $25 an acre. This amounted to less than a tenth or less of what landowners would get once word got out that they were sitting over trillions of cubic feet of natural gas.

“If only I knew,” Brooks said in a recent interview. “But you could say that about a lot of things.”

As Cabot began drilling wells on his land, the farmer held hope that royalties would make things right.

“You better get it on paper. Word of mouth and a handshake means nothing to these guys.”

It’s not hard to understand why Brooks might feel that way sometimes, but it’s a little like buying a trinket at an auction and learnng later you paid more than retail. You have no one to blame but yourself and no one should feel sorry for Walter Brooks. He didn’t get deceived by “word of mouth or a handshake,” but, rather, simply signed too quickly. Yet, Walter Brooks did very, very well as he told us all in Truthland when he provided a fuller picture in his own words:

Yes, you can sum it up by the bumper sticker Walter Brooks attached to the back of his tractor, which was the focus of the camera as the Brooks interview ended:

Tom Wilber didn’t mention that, of course. No, he left it out, just as he left out the half billion.

It reminds me of what we Catholics say at Mass every Sunday when we pray, “I confess…I have sinned…in my thoughts and in my words, in what I have done, and in what I have failed to do…” It’s a reminder our lives are a matter of what we fail to do as much they reflect our actions and a seasoned reader learns this rule applies most especially to storytelling. Tom Wilber is telling a story and leaving out the parts not fitting his preconceived storyline that natural gas must be bad.

Wilber, in fairness, does tell some of the good story but always with a jaundiced view and a condescension that resides just below the surface. Here’s how he reports on job numbers (emphasis added):

The promise of jobs rising from fracking has been the mantra ever since the rise of drilling coincided with the onset of the deep recession in 2008. Soon after, an industry report published by Penn State University projected shale gas development would create more than 175,000 statewide jobs over the course of a decade – most of them blue collar.

With the veneer of academic credibility, the report made huge headlines, even though the university administration later distanced itself from the findings after an internal review found authors Timothy Considine and Robert Watson failed to disclose funding and “may have well crossed the line between policy analysis and policy advocacy.”

Still, the promise was reinforced by official numbers released from the Pennsylvania Department of Labor under the administration of former Gov. Tom Corbett. Industry jobs reached 230,000 in 2014. Corbett rounded the number up to 250,000 in some of his speeches.

Economists, checking the math, complained the Department of Labor was misleading the public by counting every worker in steel, construction, government regulatory agencies and certain other sectors regardless of whether they had anything to do with shale gas development.

Under current Gov. Tom Wolf, the Department of Labor switched to accepted methodology and projected jobs fell to under 90,000 – just over 1 percent of the state’s total number of jobs.

John Hanger, director of planning and policy for Gov. Wolf, characterized the revised figures as representing an “important” contribution to the state’s economy. But, regarding the previous calculation, “frankly, it was truly absurd,” he said.

The opening reveals the prejudice as Tom Wilber uses “the promise of jobs” as if it didn’t happen, when, of course, we know from what we’ve seen in Bradford and Susquehanna County that it not only happened, but changed everything, taking Susquehanna County weekly wages from bottom to a point where they trump Broome County in just five years: 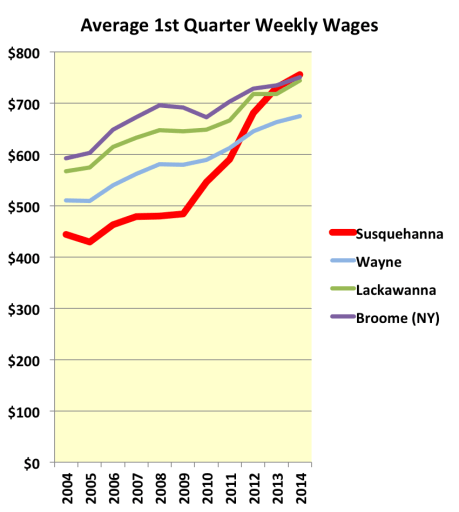 Once again, though, it’s what Tom Wilber fails to do that counts. He claims Tom Corbett came up with inflated job numbers and even quotes John Hanger as saying the numbers were “absurd,” but as I noted here, it wasn’t the Corbett administration that came up with those numbers; it was the preceding Rendell administration of which Hanger was part and the numbers were correct unless you want to argue the difference between the 249,436 jobs reported on Marcellus Shale Fast Facts and the 250,000 jobs Corbett claimed. The only “economists” who critiqued those job numbers and think natural gas isn’t important to Pennsylvania were some public employee union hacks and Penn State’s Tim Kelsey who, I noted, “never met an argument for Marcellus Shale development he didn’t want to discount, minimize or pan.”

As I also observed in that post, the new numbers being put out by the Wolf administration are the ones seriously flawed, though even they allow for the fact the industry employs at least 1% of Pennsylvania workers, which is huge for rural Pennsylvania where most of the jobs are located:

Once again, it’s what Tom Wilber leaves out that tells the real story, right down to comparing Pennsylvania’s impact fee with the Texas severance tax without telling readers that tax includes enormous allowances and exceptions and that, unlike Pennsylvania where we have one of the highest corporate taxes anywhere, Texas has no corporate income tax. We’ll see what the rest of the series brings, but don’t expect anything much better. Just look out for what’s unsaid, what Tom Wilber failed to do.

7 thoughts on “What Fractivist “Reporter” Tom Wilber Failed to Do”