The lead author of the politically-timed PennLive shale series seems to have a bad case of Erin envy – Erin Brockovich that is, the trial lawyer rainmaker.

Earlier this week I did a post on the PennLive shale series entitled “Pa. regulators fail to protect environment during Marcellus Shale boom,” which, I observed, appears to be a politically timed attack in support of Governor Wolf’s tax war on the one industry that lifted up Pennsylvania during the economic recession. The series has ignored facts counter to the desired narrative, accorded automatic credibility to the baseless assertions of industry opponents and fed into the panoply of distortions that have characterized fractivism.

It has been, quite simply, a hatchet job, but not a particularly effective one as the series hasn’t seemed to get a lot of traction. Moreover, the defensive reaction from the lead author, Candy Woodall, and her supporters to my little post reveals a sensitivity that bespeaks a weak case. Some of us have also noticed Woodall seems to have a bad case of Erin envy.

The PennLive shale series purports to be an independent investigation; that is, to say, a non-partisan objective look at the facts with no agenda in mind other to uncover the truth. I’ve suggested there might be another PennLive agenda – that of giving a helping hand to Tom Wolf to stick the gas industry with the bill for a Pennsylvania pension problem attributable to pandering politicians. It appears, though, there could be a personal agenda as well, because this is the tweet Candy Woodall sent out upon the launch of her series and later deleted, apparently thinking better of it: 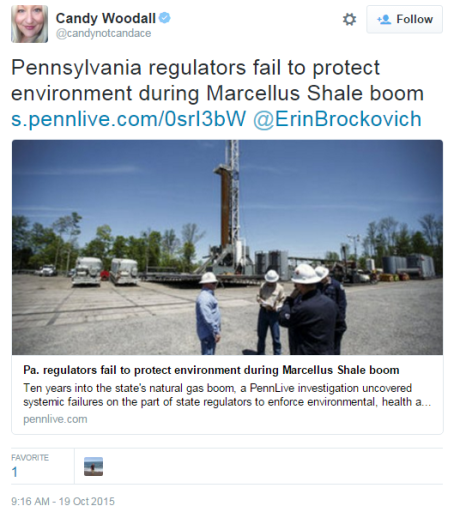 Since when do serious objective reporters go out of their way to bring their work to the attention of a trial lawyer rainmaker associated with the fracktivist lawsuit hustling firm of Weitz & Luxenberg (Sheldon Silver’s firm)? Erin Brockovich is, of course, popularly known as the subject of a phony movie starring Julia Roberts. Less well known is the fact the entire premise of the movie was false (there were no cancer clusters), the case itself was a particularly ugly matter and Erin Brockovich has made a living repeatedly suing others. She now has associations with three trial law firms and helps them bring in lucrative cases from which she is apparently compensated.

The real Erin Brockovich is not an especially sympathetic character and Weitz & Luxenberg is hardly the type of firm to which one wants to be politically linked to these days, what with Shelly Silver under indictment and all that, so why is Candy Woodall bringing her PennLive shale series to Brockovich’s attention? And, why did she later think better of it? Is this normal behavior for a journalist? Do unbiased, objective reporters tweet their stories to celebrity agents of trial lawyers? Or, is it, as I suggested above, just a bad case of Erin envy? Coincidentally, Woodall and Brockovich, bare striking resemblances to each other: 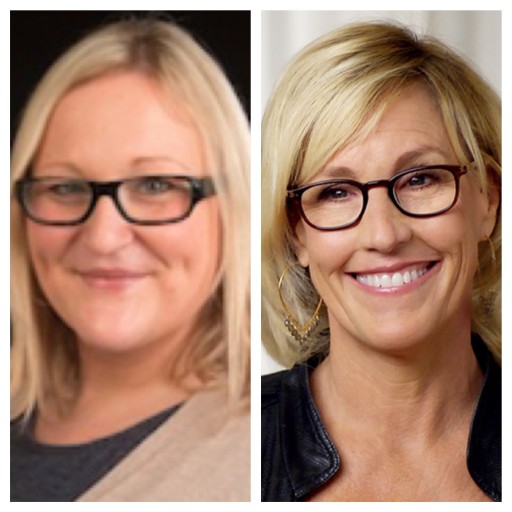 Rather remarkable isn’t it? Has Woodall, knowing she is a look-alike for Brockovich, adopted a bit of her persona, that of the oppressed muckraker? Well, the way she reacted to my post with this tweet suggests it could be:

To quote Woodall, “this response is totally unsurprising.” It is, in fact, what accusation-making activists always say when anyone challenges their work, not so artfully shifting the emphasis from what it is being challenged to the challenger as if the defender was injecting the controversy by responding to the accuser. It’s a classic maneuver and Woodall throws in “bullying” for good measure, suggesting comments on her work, that were certainly no more harsh than her own assertions, are somehow not permitted. No one is allowed to challenge Candy Woodall – she is above reproach, the heroine no one dare question.

It’s utter nonsense, of course. Woodall did get some support from Jesse White, but we’ll let that irony stand for itself. What she ought to be doing is responding to the real criticisms we made of her series; her featuring of an accuser with no evidence, her failure to look at how Pennsylvania’s peers among state environmental agencies have judged its program and her dismissal of the Yale study, for example. She should also be answering why, given the timing, we should not conclude her’s is a politically motivated attack synchronized with the Wolf administration. And, while we’re at it, let her defend these tweets where she argues for the harshest possible penalties first and due process later (shades of an EPA attitude squashed by the Supreme Court): 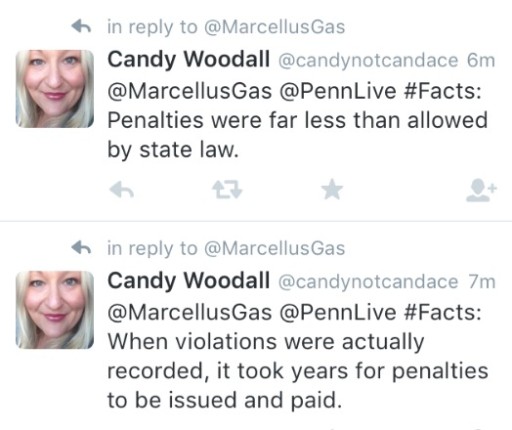 Think about what Woodall is suggesting here – that DEP should simply impose a fine and, not just any fine, but the maximum possible fine, the minute an inspector thinks he or she observes a violation. There should no investigation, no right of the accused to defend themselves and no appeals – just kill ’em all now and let God sort it out later. Somehow, I doubt Woodall would take that position were she to be served with an IRS penalty she didn’t feel she deserved.

There’s much more that’s wrong with this PennLive shale series but others (see here and here) are doing a fine job exposing those problems with the facts. I’m interested in the motivation behind the story. I ultimately cannot, any more than anyone else, know what’s in Candy Woodall’s heart, but the circumstances of this story, its shallow and misleading nature and the strange way she has sought to promote the series through tweets to celebrity plaintiffs ring a bunch of alarm bells for me and should for others as well.

Woodall can say what she wants and, no doubt, will but don’t we all deserve an answer as to why Candy Woodall was tweeting her story to the attention of Erin Brockovich, agent for ambulance chasing trial lawyers salivating for fracking cases, as they were with this West Virginia ad featuring her: 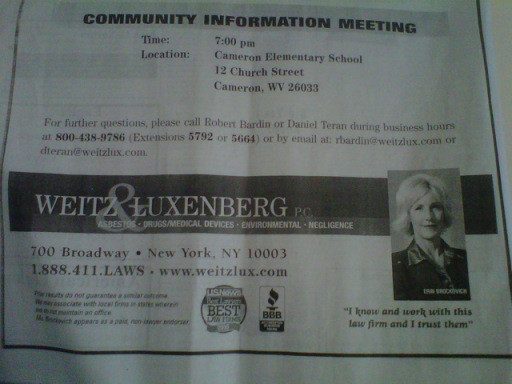 Note picture of Erin Brockovich in lower right with quote about how she trusts Weitz & Luxenberg, who pay her, of course, as a rainmaker for the firm.