Remember when fractivists were parading around art economist Janette Barth’s studies as evidence natural gas development wouldn’t do much of anything for places such as Broome County, New York? I remember because she quoted a plan developed me as part of her case, completely misrepresenting what I had stated.

That was in 2010-11 and now we have the benefit of additional hindsight and Barth is looking pretty pathetic as a prognosticator as Susquehanna County has far outpaced Broome County in wage growth and moved past in fact in average weekly wages, something we might have all thought impossible for a rural county that was going nowhere a short five years ago.

Here’s what Jannette Barth said in 2010 in a report the Delaware River Basin Commission, under fractivist under Carol Collier’s leadership, thought so good they included it in their research library (emphasis added):

However, there has been so little actual, current, unbiased examination of the economic impact that it is fair to say that positive economic impact is more an assertion than a proven fact. It is possible that the net economic impact may be negative for New York State and its counties.

The unsupported assumption of a net economic benefit from gas drilling in the Marcellus Shale is largely based on anecdotal experience and studies from other gas producing states.

It’s not clear where Barth thought one should get evidence if not from the experience of other gas producing states, but it hardly matters as she had already proved to be speaking as a Catskill Citizens for Safe Energy fractivist herself, not as an economist.

If she wants the real answer (trust me – she doesn’t) it is now readily available. We compared Susquehanna County, Pennsylvania with Sullivan County, New York, its neighbor 20+ miles to the east a while back, showing how the former had bested the latter across the board, and, today, writer Dan Falcheck at the Scranton Times reports this (emphasis added):

Since before the recession, average weekly wages reported by employers in Susquehanna County surged a whopping 57.8 percent, the most dramatic jump in Northeast Pennsylvania and one largely attributed to natural gas drilling.

The federal Bureau of Labor Statistics recently compiled employment and wage data for the first quarter of 2014, showing an average weekly wage in Susquehanna County of $756, up from $478 in 2007, just before the recession.

Those counties experienced a greater increase than the more urban counties in Northeast Pennsylvania, where Lackawanna and Luzerne counties saw average wages increase 18 percent and 14 percent, respectively. If workers feel as though they haven’t received a double-digit wage increase over the last seven years, it may be because most wages barely remained ahead of inflation. From March 2007 to March 2014, the Consumer Price Index for all items in the Northeast United States increased 15.6 percent. Workers whose wage increases were less, lost ground in terms of buying power. 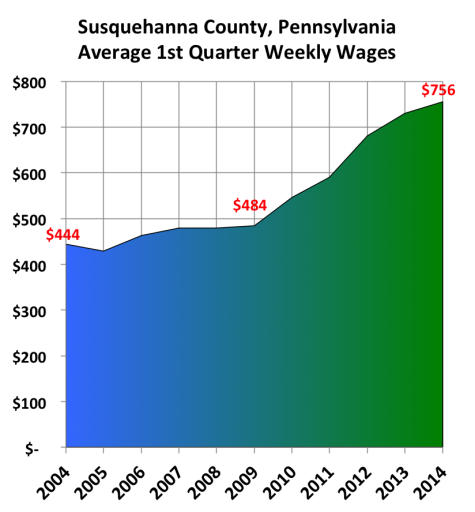 Just for fun, we decided to compare this growth to that of not only Lackawanna County, it’s urban neighbor to the south, but also to Broome County, New York, its urban neighbor to the north as well as Wayne County, where I reside, and we are prevented from developing our natural gas by a feckless DRBC that has irresponsibly refused to move on already drafted natural gas regulations. Here is the comparison: 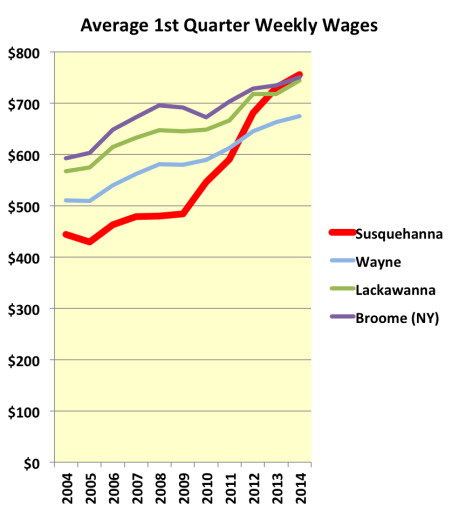 Notice how Susquehanna County started at the bottom and stayed there until 2010 when gas drilling surged and turned things around for this “back forty” county squeezed between Binghamton and Scranton. Now its average weekly wages top not only my county but those two urban areas. Where else does this happen except in areas of natural gas development? Short answer: it doesn’t. This is an absolutely remarkable occurrence and it shatters the myths perpetrated by Jannette Barth and other fractivist junk scientists. Susquehanna County is on the march, just like the rest of the Marcellus Shale, Eagle Ford Shale and other shale regions. Don’t tell us New York’s Southern Tier couldn’t use some of this. It’s about the middle class!

10 thoughts on “Susquehanna County: From Bottom to Top in 5 Years”