Recycling water is now standard practice with many natural gas companies, although some members of the press are just catching up with it.

The recent AP piece on regional drillers and their declining use of water for drilling/fracking processes really comes as no surprise to those of us in the industry.  In fact, my first thought after reading it was “tell me something I don’t know.”  I am glad to see this word finally getting out, however, because this another area where we as an industry could do a better job explaining how much water we really use when compared to other practices out there. We should be talking more about, too, about the increasing number of companies recycling water for reuse.

Contrary to what has been written the last few years, companies drilling in Pennsylvania like Range Resources and Cabot Oil & Gas (see video below) have been recycling 100% of their water for several years.  This isn’t a secret…it’s been happening for some time.  It’s a shame if a large part of the general public is just learning this fact now.

The gas industry recycling water doesn’t fit the standard anti narrative that drillers are wasting and using so much water that drought conditions are near for a community near you.  That’s just not the case.

As the numbers in the article show, much less freshwater is needed these days due to recycling and advances in technology (see, too, this article in Montrose Independent from 2012).  And no matter how the general press may want to play it, that’s a good thing for the industry.  It’s something we must shout from the rooftops and make sure the communities in which we operate understand.

I’ve been able to see these processes firsthand, starting with the monitored withdrawal of freshwater out of rivers and streams, the treatment process and ending when sent out for reuse in new wells.  It’s a well regulated process from what I have witnessed.  Every drop of water must be accounted for in each one of these steps, and an attitude of safety pervades with every worker you meet. 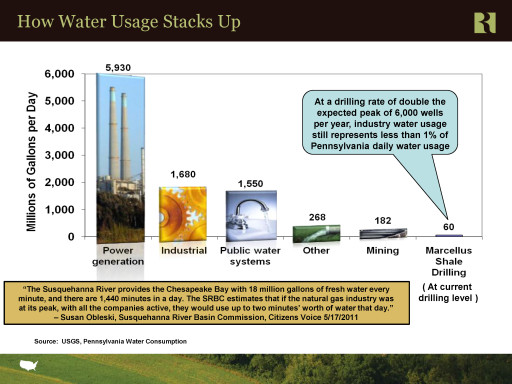 In fact, each and every time an outsider to the process sees it for the first time, the remarks are always about all the safety measures built in to the processes.  It shouldn’t be a surprise, but from what people read, they tend to think we operate like we’re in the Wild West.  Nothing could be further from the truth.  I challenge those against what we do to actually visit the fields.  Get out of your offices and walk in our shoes, see what we see and hear.  You might be pleasantly surprised.