Southwestern Energy Company is a major player in the Marcellus Shale and, yesterday, marked five years of very productive and successful activity in the region.

Southwestern Energy Company President and CEO Steve Mueller joined employees of the company yesterday in Tunkhannock to celebrate the company’s first five years of production in the Marcellus Shale play; five years that have been extraordinarily productive and successful. More importantly, because the company has acquired major additional acreage in the Marcellus Shale region, this foundation provides a superb stepping off point for further growth in the future. Southwestern Energy has already produced approximately 348 billion cubic feet (Bcf) of natural gas from the play with drilling focused mostly in the Northern Tier area of Pennsylvania, where much of the added acreage also lies. The company anticipates reaching 1 Bcf per day by the end of 2014.

“Milestones such as this should be celebrated,” said SWN President and CEO Steve Mueller. “We’re proud of the work our employees have done in Pennsylvania, the partnerships we’ve built locally and the contributions we’re making to the country’s energy supply through our work in the state.”

Southwestern Energy, in 2013, announced the acquisition of approximately 162,000 net acres, bringing its total acreage position to approximately 292,446 net acres. The company has already developed wells in Susquehanna, Bradford, Sullivan and Lycoming Counties and has other undeveloped acreage in Wyoming and Tioga Counties; making the Northern Tier region of the Marcellus Shale region a centerpiece of its drilling program going forward, although it has large lease holdings as well in the Southwest, the West and New Brunswick. 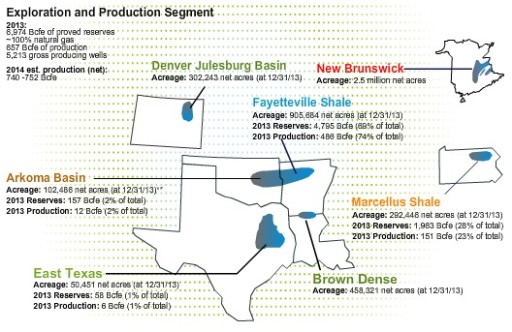 Southwestern Energy was an early participant in the Marcellus and Mueller says the company has been more than pleased with its results. The exploitation of the Marcellus is a major focus for the company with investments during 2014 expected to reach $700 million, according to their most recent news release.

In addition to the anniversary in the Marcellus, SWN is also marking 10 years in Arkansas’ Fayetteville Shale this month, which has been the company’s biggest until now. Here’s some more from the news release:

According to IHS, a global information provider, Marcellus production will bring $16.8 billion in gross domestic product (GDP) to Pennsylvania in 2015 and $42.4 billion in 2035. And reports show the oil and gas industry in Pennsylvania contributed nearly $2 billion in corporate and personal income tax revenue and nearly $225 million in impact fees last year. In addition, the state’s natural gas industry has paid more than $630 million in impact fees in the last three years, and invested more than $1 billion to improve roads. As for employment, the natural gas industry supported 245,000 jobs in Pennsylvania in 2013 with an average pay of $90,000.

Southwestern Energy, or “SWN” as it’s commonly known, has approximately 160 employees who live and work in Northeast Pennsylvania where there are currently four rigs in operation. It just built a brand new headquarters on Route 92, near Tunkhannock, in fact (pictured below) demonstrating its long-term commitment to the region.

That commitment to the region is goes well beyond very positive economic contributions and investments made.  Like other gas companies operating in the region SWN has put a strong emphasis on “building partnerships that benefit local communities.” It contributed, in fact, some $1.8 million to communities where it works in 2013. “Through volunteer and financial support, the company focuses its giving in the areas of education, environment, disaster relief, community vitality, and health and nutrition. Locally, SWN has supported groups such as Tunkhannock School District’s Tiger House, and area emergency management services.” It also supports Hunters Sharing the Harvest and many other worthy programs.

Currently, SWN is the fourth largest producer of natural gas in the continental United States and is obviously hungry to do more. The base it has established in the Northern Tier and Lycoming County region of Pennsylvania sets the table to do just that.