Is there anyone left who still takes serial protestor Alex Lotorto seriously? Apparently, there is one naive environmentalist and some other folks in Jessup who do, despite a long trail of attention-seeking fiascos that have given him a well-deserved reputation as his generation’s most ardent wanne-be red diaper baby. Lotorto was perfect for the 1930’s and would have done just fine in the 1960’s as well, but now, like so many of the “occupy” contingent he’s hopelessly out-of-sync and keeps desperately lurching from cause to another in his unlimited free time, playing whatever role will turn the spotlight in his direction. Hs latest endeavor is to oppose a natural gas power plant in Jessup, Pennsylvania.

The Serial Protester’s Latest Cause

Lotorto has joined with a young Mayfield woman by the name of Kayleigh Cornell to launch a campaign against the Invenergy LLC plan to build a 1,300 MW gas fired power plant in Jessup. I don’t now a lot about Ms. Cornell, other than that she is a graduate of Amherst, has been associated with PennFuture and promotes “cob ovens” as a way to build a “sustainable planet.” Her choice of Alex Lotorto as a partner in opposition to the Invenergy proposal, though, tells me she’s quite naive. 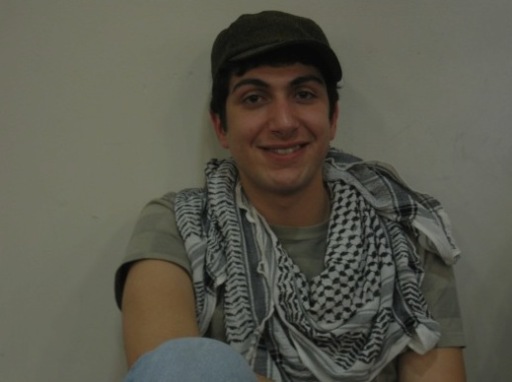 A young Alex Lotorto wearing a Palestinian-style scarf at a NYU protest he led as a student from Muhlenberg College.

We have chronicled Alex’s exploits many times here and at Energy In Depth. He’s currently associated with the Energy Justice Network, which is financed by the Earth Island Institute, another of those Rockefeller causes intended to serve as the point of the spear in the family’s efforts to “strategically parkify” much of rural America and Canada. The Rockefeller Brothers Fund, in fact, has given Earth Island Institute some $670,000 over the last several years to sponsor “its Energy Action project which organizes and mobilizes 18-35 year olds around reducing greenhouse gas emissions.”

Lotorto, in other words, is the ultimate “useful idiot,” exploited to the max by the 1% he thinks he’s opposing. He’s their agent in suppressing projects that benefit the poor and middle classes so as to advance his sponsors’ own special interests. He sides with these PovertyKeepers in putting hiking trails and scenic views ahead of the interests of locals in economic development and inexpensive clean energy, all the while pretending to speak for the latter. It’s his schtick.

He’s apparently performed that schtick since he was old enough to carry a placard, running from protest to protest, chaining himself to this and that, threatening to hang himself and various other theatrical exhibitions. Here is a taste of Alex Lotorto from a few years ago (just watch the first two minutes or so):

You can also read about his earlier role in leading an occupation of the New York University  food court here. He was then a student at Muhlenberg College. He also led protests at the University of Pittsburgh while attending Muhlenberg. He’s a “have mouth, will travel” serial protestor obsessed with acting out his dream role of being a 1930’s Wobbly organizer.

Now, he’s found Jessup, another convenient target of opportunity and he’s out there uttering this sort of nonsense:

“My personal feeling about it is, New York and New Jersey send their garbage to our landfills and dump the air pollution from their electricity generation into our skies,” Mr. Lotorto said in an email. “A hundred years ago, they expected us to go down into the mines to get their coal. Haven’t we had enough?”

It will surprise no one familiar with Lotorto to know his family came from New Jersey and moved to Milford in Pike County, Pennsylvania (an hour from Jessup) relatively recently. How much time they spent in the coal mines of New Jersey isn’t clear. 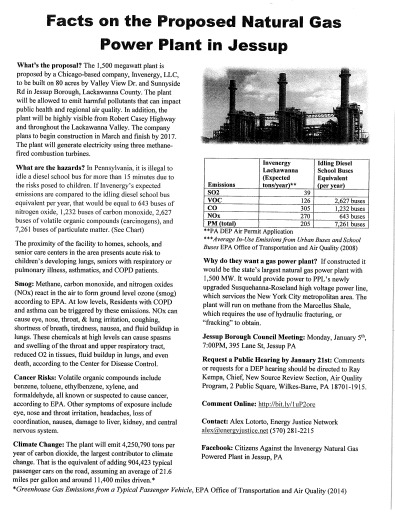 Notice the reference to a 1,500 MW facility. It’s actually 1,300 MW but who’s counting? Lotorto’ main point, after one wades through polemics, is that the facility will produce emissions of certain air pollutants, which, of course, he argues are dangerous by comparing them to school bus emissions. It’s the kind of silly argument fractivists love because it has no relevance in real life, making it all the more useful for trashing something. That something, in this case, is inexpensive clean energy produced by fracking, which they hate because they love to hate oil and gas.

Lotorto’s numbers regarding emissions need some perspective you can’t provide by comparing power plants and school buses. He says the DEP application indicates potential emissions of 270 tons of nitrogen oxides (NOx), for example, which sounds like a lot, until you realize that’s only 0.21 per megawatt of power. That means it’s even cleaner than UGI’s Hunlock Creek operation which, using similar technology, produced only 0.28 tons per megawatt in 2013, according to DEP, and that was a huge reduction (on the order of 97%) over the 10.5 tons per megawatt produced when that facility burned coal. Invenergy’s proposed facility will, by replacing still more power generation by coal, help to further clean Pennsylvania’s air.

Also, the Invenergy facility would hardly be the only facility emitting NOx in the vicinity, Other facilities on the DEP list include various hospitals, Sandvik Materials Technology and the PEI power plant in Archbald, which produced 70.48 tons in 2013, or about 0.84 tons per megawatt. The interesting thing, moreover, is that NOx emissions in Lackawanna County have declined by roughly 36% since 1999. Regionally, they have declined by a whopping 56.5% or 11,785 tons since 1999. Invenergy’s facility would use but 2.2% of those reductions and, by replacing coal and less-efficient power plants on our grid, continue the long-term decline in NOx. That’s the reality Lotorto ignores in his child’s play.

It’s the same thing with other emissions. The regional gains dwarf what Invenergy indicates it will produce. Lotorto’s handout also ignores something far important; a school bus emits at ground level in the faces of children, which is why there is a rule limiting how long the things can idle. The Invenergy facility will be located on an 80-acre tract that, despite being inside the borders of a borough, will be isolated from the population, plus it utilizes stacks to disperse the emissions at a higher level, significantly reducing the impact. The bigger point, however, is this; the facility has to meet DEP air quality criteria at its property line. That’s how the system works, so, when all is said and done, the impact is not even close to a single school bus blowing into the face of a child waiting for that bus.

Not that any of this matters to attention seeking children like Lotorto and his gang of Rockefeller shock troops. They’re on a religious crusade to protect the views of hikers, save the planet and impose on us all their naive vision of a world where we depend on solar panels and windmills to run our vehicles and heat our homes, as if they wouldn’t also oppose equivalent sized facilities of that sort or that such facilities wouldn’t have their own impacts.

One of those projects is the Grand Ridge Solar Farm in LaSalle County, IL (pictured below)  which generates 20 megawatts of power off 140 acres of solar panels. That’s 7 acres per megawatt. If the Jessup facility were to be solar instead of gas, that means it would consume up to 9,100 acres of land to produce the same 1,300 MW of power. That’s more than twice the size of the entire Borough of Jessup (4,320 +/- acres), meaning Lotorto would destroy the Borough to save it, if you’re into the sort of false analogies he likes so much.

The solar farm is also next to Invenergy’s Grande Ridge Wind Farm, which produces 210 MW of power and uses roughly 60 acres per MW (although much of the land can be used for agriculture at the same time). Producing 1,300 MW of power using wind, therefore, would require 78,000 acres or every square inch of the Moosic Mountain from Dunmore to Forest City in a strip that’s seven miles wide. There’d be no view for hikers other than sunshine glaring off the tens of thousands of swirling blades. Talk about a shadow flicker problem!

Worse, the actual electricity produced by solar and wind facilities is typically only about 25% of rated capacity – one of the dirty little secrets of the industry – whereas a combined cycle gas plant achieves over twice that, meaning we’d need to wipe out most of the Lackawanna Valley, as well as the Mountain, to get the same kind of energy out of solar and wind that the proposed Jessup facility will produce on 80 acres without significantly impacting anyone’s air quality.

That’s the real story about Jessup and we haven’t even begun to address the positive economic impacts associated with construction jobs, operations and inexpensive energy. It’s a story Lotorto has zero interest in, of course, because it does revolve around him and Ms. Cornell is too busy worrying about the views of hikers. It’s a different matter for the rest of us.