Groups claiming to be non-partisan are often among the funders and enablers of very partisan fractivist campaigns under the cloak of public accountability.

Last week I wrote about the Fracking Lobby Lie and this prompted a reader to ask about Soros connections to fractivist campaigns.  This is a subject we’ve covered some (see here and here) but not a lot at Natural Gas Now because too many people have stretched too far to connect Soros to all sorts of nefarious enterprises. Nonetheless, as the old saying goes, “You’re only paranoid when you’re wrong” and there are a few things we do know about Soros that are undeniably true.  Those few things illustrate just how much of a fraud most fractivist campaigns really are.

When I went back to my notes and previous stories where we touched lightly on the Soros connections, I was reminded of a story our buddy Jim Willis at Marcellus Drilling News wrote on the subject of Soros a while back. It noted the Soros connection to a group known as the the Public Accountability Initiative (PAI), which had criticized a University of Texas study that fracking wasn’t contaminating water supplies.  As Jim’s sources explained, the Open Society Institute, a Soros creation, has funded the Sunlight Foundation, which funds PAI. Both the PAI and Sunlight claim to be non-partisan but that’s just that’s the standard intro for anything heavily partisan in our Orwellian world of today.

What’s far more interesting is how the PAI describes itself:

We are a non-profit, public interest research organization investigating power and corruption at the heights of business and government.

That’s quite a claim. There’s another over on the PAI sister site called Little Sis, which is promoted as “a grassroots watchdog network connecting the dots between the world’s most powerful people and organizations.” It claims to be “a unique resource for investigating cronyism, conflicts of interest, and systemic corruption.” It also say the site is “one-of-a-kind research tool for journalists, academics, activists, and watchdogs.” So, I decided to test it by inputting “Public Accountability Initiative” to see what Little Sis says about its own big brother. Here is what I got: 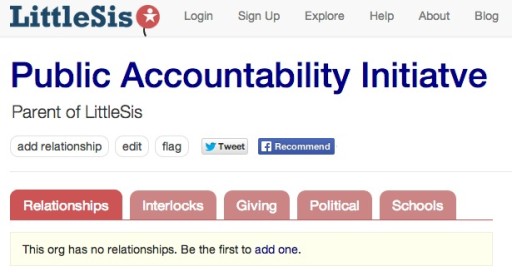 No relationships? Why does this bold, daring organization “taking on the world’s most powerful” suddenly go wimpy and clam up when it comes to talking about its parent? Well, that’s not exactly clear. Maybe, they don’t want to call too much attention among journalists and others to the funding of their parent’s sugar-daddies. Some of that information is available from the page nested within PAI’s “About” page, however. It indicates the PAI is funded by nine different entities, among them being not the Sunlight Foundation, but also the Park Foundation and United Re:Public.

The relationships among all these entities is very illustrative of how fractivist campaigns are financed. The PAI itself is not a big outfit. It had only $78,913 in revenues in 2011, according to its 990 return for that year. It is run by a bunch of students, recent graduates and folks who migrated there from the SEIU, Media Matters and the like.  (Media Matters got a $1,075,000 grant from Soros at its inception and also gets money from the Sandlers, who help finance Pro-Publica, a fractivist opinion journal.) PAI established Little Sis, which they call “the opposite of Big Brother,” over a four-year period using some $207,400 from the Sunlight Foundation.

That’s about three times what its annual budget was when it started, so the Sunlight Foundation is pretty damned important to PAI. Little Sis wouldn’t exist without it and George Soros is pretty damned important to Sunlight Foundation because it gives out relatively few grants (only $681,320 in 2011) and has received $515,000 in the last few years from The Foundation for Promotion of Open Society, one of the Soros groups. Therefore, the connection between Soros and PAI is no small thing. It’s clearly one of the tools by which this guy is influencing the public debate.  Moreover, he’s the 19th richest man in America according to Forbes and he’s worth an estimated $20 billion. 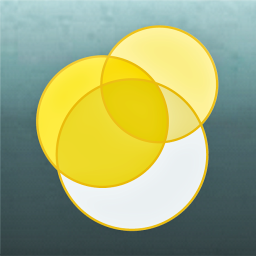 So, when PAI says its “researching the 1%,” and exposing influence, it’s doing it with the money and influence of the 1%, casting quite  a different light on its claims. What PAI is really doing is serving as a proxy in a battle of some of the 1% against the others and, much more importantly, the rest of us. The PAI claims to non-partisanship ring even hollower when one visits their research page and sees three of their five “recent reports” are fractivist campaign propaganda, including an attack on MIT and Energy Secretary Ernest Moniz and, incredibly, another on the Heinz Endowments for being too soft on fracking, which is belied by that organization’s funding of numerous fractivist campaigns on its own, of course. I suppose that was part of an effort to get Heinz back on the plantation and, if so, it succeeded.

The Soros connection is always one step removed, however, as can be seen above. It’s also evident in the way money has been indirectly funneled to the Sunlight Foundation. Soros fund various Rockefeller foundations. Two of the Rockefeller foundations together have given another $505,000 to Sunlight. That’s how it always works; there is what these elitist groups give on their own and then there is what they run through other special interest groups.

No special interest group is more committed to funding fractivist campaigns than the Park Foundation, however. They fund it all and new funding avenues are being discovered, it seems, every day. Their funding of PAI has included $70,000 in contributions (almost equal to the entire PAI budget in 2011) and $20,000 of that was specifically directed at “strategic, high-impact research on the gas industry’s network of support in the academic, policy and financial spheres.” Once again, we have an illustration of how it all works. The Park Foundation, which funds everything fractivist imaginable, particularly in the “academic, policy and financial spheres,” funds a group to target others for doing precisely what it’s doing. That group, after taking Park’s 1% money to do just that, then goes out and brags how it’s fighting the 1%.