The corruption Preet Bharara has uncovered around Sheldon Silver may be just the beginning. He should also be looking at how fracking decisions were made.

Our readers continue to help reveal the corruption that undergirds New York’s anti-fracking decisions. Last week it was Sheldon Silver’s connection to Weitz & Luxenberg, the trial lawyers who, following their own short-lived but hot pursuit of fracking cases, decided to helped finance the 9/11 lawsuits by Napoli & Bern, the firm that also represented the Dimock plaintiffs. If that wasn’t slimy enough, we now learn, courtesy of another reader, that the Chief Justice of the New York State Court of Appeals, Jonathan Lippman, the guy likely most responsible for that court’s wacky home rule decision is a long-time bosom buddy of Sheldon Silver who got his job courtesy of the just-arrested Assembly Speaker.

Jonathan Lippman, some of our readers will also recall, was one of the skeptics on the Court of Appeals as it considered the home rule cases last year. Here is the favorite line from his remarks during the hearing; cited by fractivists such as those at the DC Bureau, a Park Foundation funded propaganda outlet:

It’s not hard, in retrospect, to see which way Lippman was going to go after that remark, because it characterized pre-emption law as “bulldozing” over communities, when, in fact, the statute was designed to create some consistency among the municipalities for the purpose of regulating things individual communities could not do effectively alone.

What was not so apparent to those of us who don’t follow the daily intrigues at Tammany Hall was how Lippman got there in the first place. It was courtesy of Sheldon Silver, his boyhood friend, as this Village Voice article tells so well. (Bear in mind as you read it that, in New York, where they insist on being different, the Supreme Court is the county court and the Court of Appeals is what we call the supreme court in more rational parts of the world). Later, Silver attempted to modify state law as a favor to Lippman to give him an opportunity to sit on the bench another 10 years, as Fred Dicker relates here. Lippman did some unseemly lobbying for the measure but it failed.

Sheldon Silver, of course, is part of an aggressive trial lawyer firm and that’s why he’s in so much trouble. Bill Hammond at the New York Daily News, said this back in December on the same day Cuomo did his dog and pony show (using Martens and Zucker in the starring roles) to say he was coming down against fracking (emphasis added):

In his 20-plus years as speaker of the state Assembly, Sheldon Silver has been the trial lawyers’ undisputed best friend in New York government.

He has used his clout both to block any hope of tort reform in the Legislature and to advance the careers of plaintiff-friendly judges.

For much of that time, Silver has also collected a six-figure income from Weitz & Luxenberg — one of New York’s biggest and most aggressive filers of personal-injury lawsuits — without clearly disclosing what he does for that money.

What is clear for the world to see is the damage that alliance has wreaked — as New York was named the nation’s No. 1 “judicial hellhole” on Tuesday by the American Tort Reform Foundation.

Two pictures of Silver appear in the New York State Trial Lawyers Association history we talked about in our last piece on Silver and Lippman is featured as well, telling us where his heart has always been. Here he is, on the left, together with then Association President Jeff Lichtman: 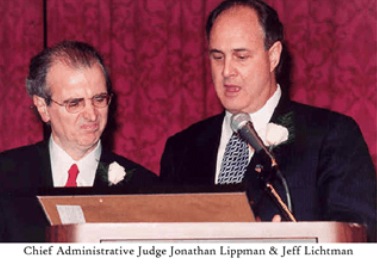 It’s not the most flattering shot and one of the interesting things about the NYSTLA history is that there are a lot of such photos included. I’ll leave it to our readers to draw whatever conclusions they like from that but it is a curious thing.

Curious readers may also wonder at what influence Silver and other trial lawyers may have had over the home rule decision. It’s impossible to know for sure, of course, but given the reach of Silver and Lippman’s debt to him, there’s no question the latter knew what his patron wanted. No conspiracy was necessary.

The big money donated by Weitz & Luxenberg to the cause of electing folks such as Eric Schneiderman, New York’s Attorney General, who apparently coordinated with the NRDC to bully municipalities daring to support fracking suggests he and other recipients knew what was expected of them as well. It’s one big corrupt world of cronyism, in fact, a cesspool of conflicted colleagues taking advantage of landowners, ordinary New Yorkers and the system – crooked in the extreme. Preet Bharara’s apparently just begun and he’s got a long ways to go. Maybe he ought to also be looking closely at some of those land deals the NRDC gang did with the Governor at inflated prices and their connections to all of this. It’s a big cesspool.