Add Highland Township, Elk County, Pennsylvania to the growing list of communities conned by the CELDF who now regret being taken in by these radical scammers.

A little over two years ago, Jim Willis of Marcellus Drilling News (MDN) and I wrote here about a legal battle going on in Indiana and Elk Counties, Pennsylvania. We discussed the radical nature of the CELDF and its campaign to essentially throw out our Constitution and government, replacing all with some sort of statist utopia where big big guy Tom Linzey could sit on the throne, eating drumsticks and grapes while dispensing socialist justice and reflecting on far he had come from his days as the spoiled school nerd. It was all about yet another pair of communities sucked into the Community Environmental Defense Fund (CELDF) whirlpool of extremism and enticed to adopt one of its plainly unconstitutional “community rights ordinances.”

Highland Township, Elk County (population of 492) was taken in by the CELDF. It passed a a version of the same basic community rights Tom Linzey has used to manipulate other communities into supporting his revolutionary agenda using issues with bottled water plants, trains and others wherever he can find them. The smaller and more naive, the better, of course. Realizing, shortly after, that this strategy was going nowhere legally, the Supervisors seem to have been given the equally bright idea by Linzey they could simply avoid the Constitution by adopting a home rule charter. Now, those hopes have been dashed by a Federal Court decision once again demonstrating CELDF should be the acronym for Community of Elitist Lawyers Doing Flimflam.

Federal District Magistrate Judge Susan Baxter is a good writer and here are the key excerpts from her decision, starting with the procedural background (emphasis added):

Seneca Resources is a Pennsylvania corporation engaged in oil and natural gas exploration and production in various locations within the Commonwealth of Pennsylvania, including Highland Township in Elk County. In January of 2014, Seneca Resources received a permit from the United States Environmental Protection Agency to convert an existing natural gas well into an underground injection control well (UIC). The company began work soon thereafter on securing a permit from the Pennsylvania Department of Environmental Protection. An application was submitted to the DEP in November of 2014.

While Seneca Resources was engaged in the permitting process, Highland Township adopted an ordinance which, among other things, made it unlawful for corporations to deposit, store, treat, inject or process waste water, “produced” water, “frack” water, brine or other materials, chemicals or by-products that have been used in the extraction of shale gas onto or into the land, air, or waters within Highland Township. This prohibition specifically applied to UICs. Ordinance 1-9 of 2014, § 4(a).

In January of 2015, Township supervisors notified the state DEP of the Township’s position that the federal EPA permit was invalid as a result of this ordinance and that any permit the DEP issued would be equally unfounded. For its part, Seneca Resources notified the DEP of its contention that the ordinance was unconstitutional and invalid under federal and state law. The DEP, however, suspended its review of Seneca’s application and, to date, has not issued a permit to Seneca Resources…

Seneca Township challenged the Ordinance in February of 2015 in this Court. See Seneca Resources Corp. v. Highland Township, Elk County, Pennsylvania, C.A. No. 15-60Erie. The parties reached a settlement and this Court entered a Stipulation and Consent Decree. The parties stipulated that the Ordinance was unconstitutional and unenforceable. In August of 2016, this Court adopted the findings of the consent decree, adjudging the Ordinance to be unconstitutional, invalid, and unenforceable. That was not the end of the matter, however.

By referendum vote in November of 2016, Highland Township adopted a Home Rule Charter which, among other things, enshrined the provisions of the Ordinance previously invalidated by this Court. Section 401 of the Home Rule Charter prohibits any corporation from engaging in the depositing of waste water from oil and gas extraction within the Township. Further, Section 404 of the Charter provides that “No permit, license, privilege, charter, or other authorization, issued by any state or federal entity, that would enable any corporation or person to violate the rights or prohibitions of this Charter, shall be lawful within Highland Township.” Other sections of the Charter provide for fines for any violations of its provisions and create standing for entities such as ecosystems and “natural communities.” Section 410 of the Charter declares that Highland Township will only recognize a federal or state law to the extent it does not violate the rights and prohibitions outlined in the Charter.

Seneca Resources initiated this action on November 30, 2016, challenging the Township’s Home Rule Charter which directly precludes its ability to create and operate an injection well within the Township. Seneca Resources has moved to invalidate the entire Home Rule Charter, and to both temporarily and permanently enjoin Highland Township and the Board of Supervisors (the “Board”) from enforcing the Charter.

More specifically, the company alleges that the Home Rule Charter is preempted by the federal Safe Drinking Water Act; the Pennsylvania Oil and Gas Act; and is an impermissible exercise of police power and legislative authority. Seneca Resources also alleges that the Charter offends the Constitution’s Supremacy Clause and the First Amendment, as well as violates the company’s rights to both substantive and procedural due process.

Note how Pennsylvania DEP was manipulated in this process, initially acquiescing in the delay strategy of the CELDF. They had an excuse, of course, but hardly a good one and, fortunately, they made up for it in a big way by suing the Township themselves. The Township, it’s also worth pointing out, agreed their ordinance was “unconstitutional, invalid, and unenforceable” but still allowed itself to be convinced a Home Rule Charter would somehow correct the error and make it all constitutional. 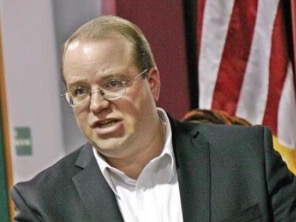 Then, somewhere along the line it dawned on them this wasn’t so smart. Perhaps their solicitor convinced them listening to Tom Linzey was fraught with huge risk; that tends to happen as reality approaches, just as it did in Mora County, New Mexico, for example. Or, perhaps someone showed them this Linzey quote:

“We don’t call it ‘Civil Disobedience through Municipal Law Making’ for nothing. It’s about seizing the municipality and turning it like a torpedo up against the state and Federal structure of law…”

Whatever the reason for the light bulb turning on, Highland Township ended up siding with Seneca Resources in this lawsuit against themselves. Yes, you read that correctly. Here’s more from Judge Baxter on the Home Rule Charter (HRC) challenge:

The Township Defendants filed an Answer to the Complaint wherein they admitted the majority of Seneca Resource’s claims, including the unconstitutionality and unenforceability of the Charter. Specifically, Defendants acknowledged that they

“are constrained to acknowledge that §§109-110, 401, and 404-411of the HRC are invalid and unenforceable as an impermissible exercise of the Township’s legislative authority and/or police powers, and that §501 of the HRC is unconstitutional. The Defendants further respectfully requests that this Honorable court limit any relief afforded to Seneca Resources Corporation to relief that is declaratory in nature and with specific regard to those portions of the Home Rule Charter (identified above) that are properly subject to invalidation on the basis of (where appropriate) preemption by state or federal law; an improper exercise of municipal police or legislative authority; or unconstitutionality, and that it award Seneca no damages, costs, or counsel fees as against Highland Township, Elk County, Pennsylvania and the Highland Township Board of Supervisors, Elk County, Pennsylvania.“

Highland Township, in other words, gave up on the claims made via CELDF, and begged the court leave the rest of the HRC alone and, above all, not impose any penalties on them. A remarkable development, to say the least. Here’s what Judge Baxter decided, among others things:

By prohibiting the deposit of waste from oil and gas extraction in the Township, § 401 of the Township’s Charter creates a clear obstacle to the Congressional objectives and procedures as embodied in the SDWA. As such, that provision is preempted by federal law. The Charter interferes, impedes, and opposes Congress’ goals. Consequently, the Commission lacks the power to legislate in conflict with the state in this area. Section 401 of the Charter stands as an obstacle to federal law, and hence is void…

Accordingly, Plaintiff is entitled to judgment on the pleadings on this claim as the Home Rule Charter violates § 3302 of the Oil and Gas Act and is therefore preempted…

Here, § 401 of the Home Rule Charter proclaims that “it shall be unlawful within Highland Township for any corporation or government to engage in the depositing of waste from oil and gas extraction,” despite the fact that the development of oil and gas (which necessarily includes the management of waste materials generated at a well site) is a legitimate business activity and land use within Pennsylvania…

Because § 401, on its face, completely bans a legitimate use, it is de jure exclusionary. De jure exclusionary ordinances can only be justified by a “substantial relationship” to public health, safety, or welfare. Township of Exeter v. Zoning Hearing Bd., 599 Pa. 568, 579-80 (Supreme Court of Pennsylvania 2009) (“a zoning ordinance which totally excludes a particular business from an entire municipality must bear a more substantial relationship to the public health, safety, morals and general welfare than an ordinance which merely confines that business to a certain area in the municipality.”). Because no such relationship has been shown here by Defendants, the motion succeeds…

When reviewing legislative acts on their face, the courts have looked for arbitrary or irrational legislation that impermissibly goes beyond serving a legitimate state interest. County Concrete Corp., 442 F.3 at 169-70. Even under this lesser standard, the Home Rule Charter fails to survive a substantive due process review. The language of the Charter itself runs afoul of constitutional protections afforded corporations and attempts to immunize Highland Township from clashes with current federal and state law…

Because the actual language of the Home Rule Charter highlights irrational and arbitrary behavior de facto, Seneca’s motion for judgment on the pleadings on this claim is granted as violative of Plaintiff’s substantive due process rights.

The best part of the decision, though, comes at the very end and has to do with something that is rarely a real issue with local laws, as most municipal solicitors will advise their clients in avoiding the problem; something called severability. Again, Judge Baxter adroitly explains:

Sections 103-106, 109 and 110 relate to the prevention of oil and gas activities and intend to create “rights” and “standing” in residents of the Township, ecosystems, and the Township. These sections are incapable of execution by themselves without § § 401, 404, and 501.

Because all of these provisions cannot stand on their own, these will be invalidated.

So ends most of the Home Rule Charter insofar as it relates to anything Seneca Resources wants to do. The CELDF, yet again, conned a tiny community, which barely got out the bad deal with its shirt. Another lesson learned as Tom Linzey takes his extremist blather to some new patsy, using the money of equally extremist trust-funder run elitist foundations. Sad.