Radical billionaire Tom Steyer threw money at Tom Wolf’s campaign for Pennsylvania Governor. Is he now treating the governor as his personal bobblehead?

Ever since Tom Wolf, Pennsylvania’s trust-funder governor, suddenly decided to pursue a fracking ban within the jurisdiction of the Delaware River Basin Commission (DRBC) I’ve wondered why. It makes no sense whatsoever, as the governing majority of the DRBC (Pennsylvania, New York and the Feds) is exactly the same as it is for the Susquehanna River Basin Commission (SRBC) where fracking has long been permitted. Both rivers are sources of drinking water and SRBC stream quality has been unaffected, So, why would Wolf suddenly decide to treat DRBC region residents as second-class citizens?

Well, there may be an answer by the name of Tom Steyer. The evidence, to be sure, is circumstantial, but the connections are just a little too coincidental for comfort.

Those circumstances include the fact Tom Steyer is heavily invested in Tom Wolf. How heavily isn’t precisely clear but Common Cause, an allied group likely to downplay Steyer’s influence, said this regarding Wolf’s 2014 campaign:

The $1.1 million Steyer spent in July alone suggests he invested a pile of money in Tom Wolf and, of course, expects something for it. Whether that includes a DRBC fracking ban can’t be definitively known, but it is reasonable to assume he certainly approves of Wolf’s betrayal of DRBC region residents of the Commonwealth and Wolf has every reason to want to make Steyer very happy.

There’s more, though. Readers will recall Wolf activated an “Environmental Justice Advisory Board” within the Pennsylvania Department of Environmental Protection (DEP) in 2015. If there really were such a thing as “environmental justice,” of course, it would be focused  on the impact of the Pennsylvania’s discrimination against the economic interests of Upper Delaware residents in favor of wealthy New Yorkers, but that’s something we can discuss another time. What’s more relevant to the matter at hand is what the Advisory Board is doing now, not what it should be doing.

What it is doing, is providing a platform for Tom Steyer’s NextGen radicals to infiltrate Pennsylvania government with fractivists. The August 2, 2016 minutes of the Advisory Board indicate the following:

From August 2, 2016 Minutes of Pennsylvania Environmental Justice Advisory Board

The online location of the presentation itself is a mystery, but we know what was said from a NextGen and PSE Healthy Energy report that is online. It’s pure junk science that disingenuously lumps coal and natural gas together. We know gas is being substituted for coal and dramatically reducing emissions in Pennsylvania and elsewhere. It is precisely this factor, and the shale revolution taking place in Pennsylvania, that have made it possible for the U.S. to achieve such tremendous success in reducing emissions compared to China, falsely lauded Germany and other parts of the world.

PSE Healthy Energy, of course, was created by Tony Ingraffea, serving in his role as shill for the gentry class Park Foundation gang of guilt-ridden trust-funders who live in gas-heated homes. It was located in Planet Ithaca, but now has a flashy new website and a new address in Oakland, California, across the bay from Tom Steyer’s operation.

NextGen has also taken over much of PSE, as one can see from the aforementioned junk science report and the fact the former gave it $96,500 in “general support” in 2015, the latest year for which we can find a 990 return filed with the IRS. Tony is now a “Senior Fellow” sent around the country to preach the gospel of fractivism and brag about how New York gets its gas from Pennsylvania. Talk about “environmental justice” or the lack of it! 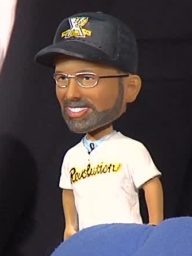 This new partnership between Tom Steyer’s NextGen and PSE is accompanied by a second arrangement. PSE did another junk science study for the Delaware Povertykeeper a/k/a Riverkeeper earlier this year. The thrust of this one is that reducing carbon emissions somehow doesn’t matter because gas produces fugitive methane emissions that are worse.

It claims “fugitive methane emissions account for 37% of total projected fuel cycle emissions,” the report being a regurgitation of the nonsense the author put out five years ago and which was roundly criticized in most of acedemia. It also ignores the huge declines in methane emissions achieved by the industry (see here and here, for example).

Moreover, he’ll keep doing it as long Steyer throws money at him to make up the difference in any votes lost with political advertising elsewhere. Wolf is a ventriloquist’s dummy or bobblehead—the kind of guy who never really engages others in discussion other than to mouth what others say for entertainment. He appears to be Tom Steyer’s bobblehead, in fact.