Natural gas substitution for coal in electric power generation has consistently reduced carbon emissions on that score, making it the best of all tools.

The Energy Information Administration (EIA) keep count and the score on carbon emissions from electric power generation just keeps getting better. Why? Because natural gas substitution for coal in the electric power sector is sill taking place, reducing emissions associated with coal. EIA, in fact, tells us “Total energy-related CO2 emissions fell in 2016 and are projected to fall in 2017 and rise in 2018, based on EIA’s latest Short-Term Energy Outlook projection.” 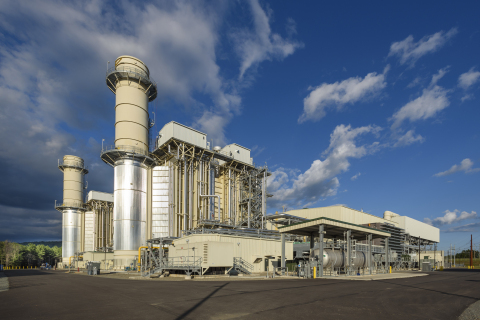 Yesterday’s Today In Energy post at EIA spells it out:

In the United States, about 90% of coal is consumed in the electric power sector. Among the top 10 states with the largest coal emissions reductions in 2015, the electric power sector’s share of coal consumption ranged from 98% in Texas to 76% in Pennsylvania, based on data from EIA’s State Energy Data System. In 2015, Illinois had the largest decline in industrial coal consumption, followed by Alabama and Indiana.

Changes in the electric power sector accounted for most of the decline in coal emissions in 2015. Power plant operators reduced generation from existing coal-fired units in response to competition from lower-priced natural gas. In addition, nearly 15 gigawatts (GW) of coal-fired electric generating capacity were retired in 2015, or about two-thirds of all retired capacity that year, based on data in EIA’s annual survey of electric generators. Many of those retirement decisions were likely affected by compliance deadlines associated with the Environmental Protection Agency’s Mercury and Air Toxics Standards rule, which had an initial compliance date of April 2015.

Natural gas substitution for coal is vividly evident in this EIA chart: 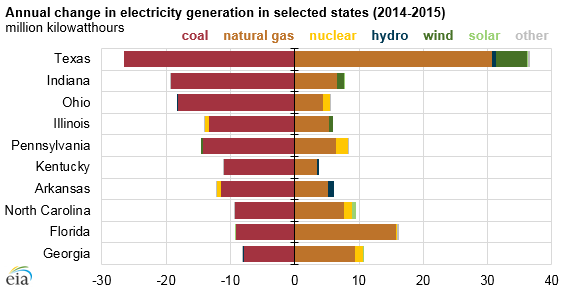 Here’s what’s happened, according to EIA:

These are the key facts to know for anyone who truly wants to do something about carbon emissions. Natural gas substitution for coal is the answer. It’s the only thing making a meaningful difference, in fact, which is why Germany’s Energiewende is accomplishing so little at such great cost. Natural gas is simply getting it done here in the U.S. with no fanfare and no massive subsidies while also reviving the rural economies of places like Southwest and Northwest Pennsylvania, Ohio and Texas.