Fake news and fake policy are the order of the day with Pennsylvania DEP methane emissions data and the fractivist hyperbole surrounding the just released data.

Articles at Philly.com (now controlled by the same anti-gas Haas family that is the William Penn Foundation and also funds PennFuture, the Delaware Riverkeeper, the Clean Air Council and StateImpactPA) and EnviroPolitics Blog are faking it on the issue of methane emissions. They’re doing so with clearly coordinated news making and reporting peddling fake news about a new DEP Air Emissions Inventory. They aim to support a stupid DEP policy initiative that is yet another government solution in search of a problem.

Here’s the headline from the EnviroPolitics Blog:

This is followed by a completely misleading analysis:

Emissions of methane, a potent greenhouse gas, are increasing at natural gas industry sites in Pennsylvania at a rate greater than gas production, alarming some environmental groups.
That news released this week was tempered somewhat Wednesday for environmentalists when the U.S. Senate voted to block a Trump administration attempt to roll back Obama-era methane rules on federal lands, none of which are in Pennsylvania, however.
PennFuture says new data being self-reported by the natural gas industry in Pennsylvania show a 20 percent increase in methane, which is a byproduct of flaring and venting that occur during natural gas production. The data are for the years 2014 and 2015, the latest available.
At the same time, gas production rose about 12 percent, according to the Energy Information Agency.
“Any time emissions are rising faster than production, it’s clear that voluntary efforts to cut emissions are not working,” Rob Altenburg, director of PennFuture’s Energy Center, said in a statement.

This article is simply a regurgitation of a PennFuture news release which no one at Philly-com or EnviroPolitics Blog bothered to fact-check. (Frank Brill, the editor there, is usually better than this.) I did fact check it by going directly to the DEP news release and their report, which may be found here in the form of an Excel spreadsheet. What I found, first of all, was this nice little table:

My high school math teacher, Mrs. Krause, taught me how to properly calculate growth percentages, but it appears the folks at PennFuture learned something quite different. Perhaps it’s new math. Using old math, though, an increase from 107,735 to 112,128 or 4,394 is 4.1% of 107,735, not 20% as alleged by PennFuture and mindlessly repeated by its sister group and Haas house organ, Philly.com, as well as EnviroPolitics Blog. That’s about one-third the 12% increase in natural gas production PennFuture reports via the Energy Information Administration (EIA). It is most definitely not a case of emissions rising faster than production and PennFuture knows this.

Why? Because the same DEP news release says the following (emphasis added):

PennFuture had this statement, knew the facts and chose to dramatically distort them for propaganda purposes. Their distortions, fake news by any estimation, were willingly, even eagerly, echoed by Philly.com and EnviroPolitics Blog. It’s nothing less than disgusting; a deliberate attempt to deceive. It’s fractivism exposed with a single example.

Worse, this is just the beginning. Mike Krancer, former Pennsylvania DEP Secretary, Senior Counsel – Energy at Blank Rome LLP and co-founder and principal of a saavy new consulting group know as Silent Majority Strategies, offered this on his LinkedIn page:

The key is what the Inventory does not report because of its odd way of reporting on a per facility basis. In fact, methane emissions per unit of production have been going down very measurably over the years…

This raises real questions about what science is behind the so-called “Methane Strategy” for unconventional oil and gas operations that was unveiled back in January 2016 and on what data DEP could have based it’s General Permit-5A approach. The GP-5A is the newly proposed first time ever, pre-construction permit for unconventional gas well sites. The answer looks like “no data.”

No question that reduction of methane emissions is a worthy goal. But the advancing technology and practices on the ground have been and are doing a great job on that already without any government imposed “strategy” or General Permit.

DEP’s GP-5A approach declined to calculate emissions as a function of production, thus ignoring the increasing efficiency in the industry. In addition, DEP’s decision to lead with the “per facility” calculation ignores the reductions achieved at well sites — thus being totally contradictory to DEP’s supposed reasons for the GP-5A.

I know that the phrase “a solution in search of a problem” is used a lot but it’s a dead on description of this particular part of the “Methane Strategy” and the GP-5A.

Here’s is the EIA data on shale gas production (withdrawals) in Pennsylvania contrasted with DEP data on methane emissions to yield the correct picture of what’s happening and to which Mike refers: 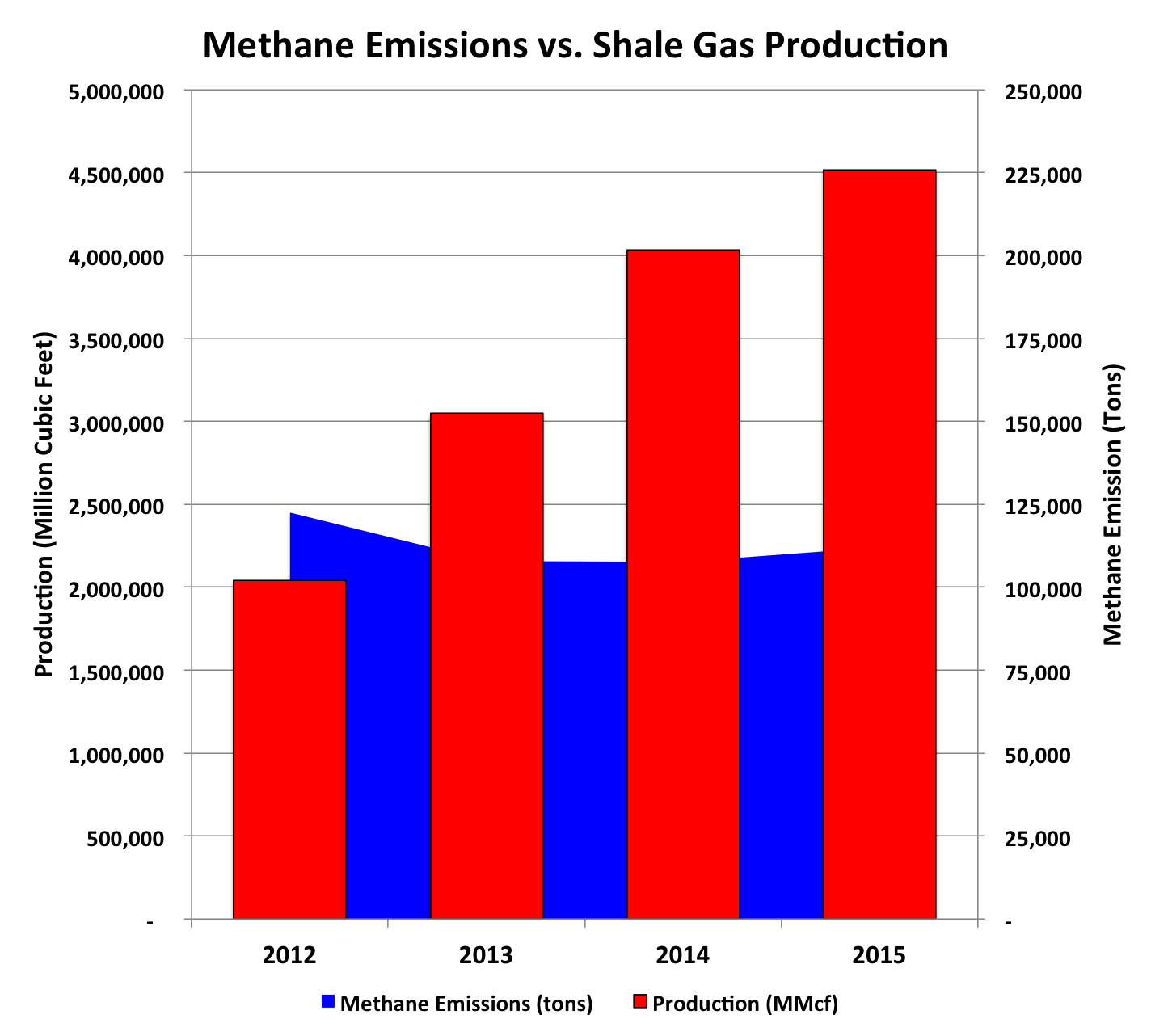 And, here is the rate of methane emissions in tons per million cubic feet of shale gas produced in Pennsylvania over the four-year period PennFuture and EnviroPolitics Blog would have us believe saw emissions rising faster than production. It just isn’t so and Penn Future is well aware of it. I’ll give Frank Brill a break and assume he simply passed it on naively believing PennFuture wouldn’t lie, Philly.com wouldn’t print a lie and neither are in the pocket of the William Penn Foundation. 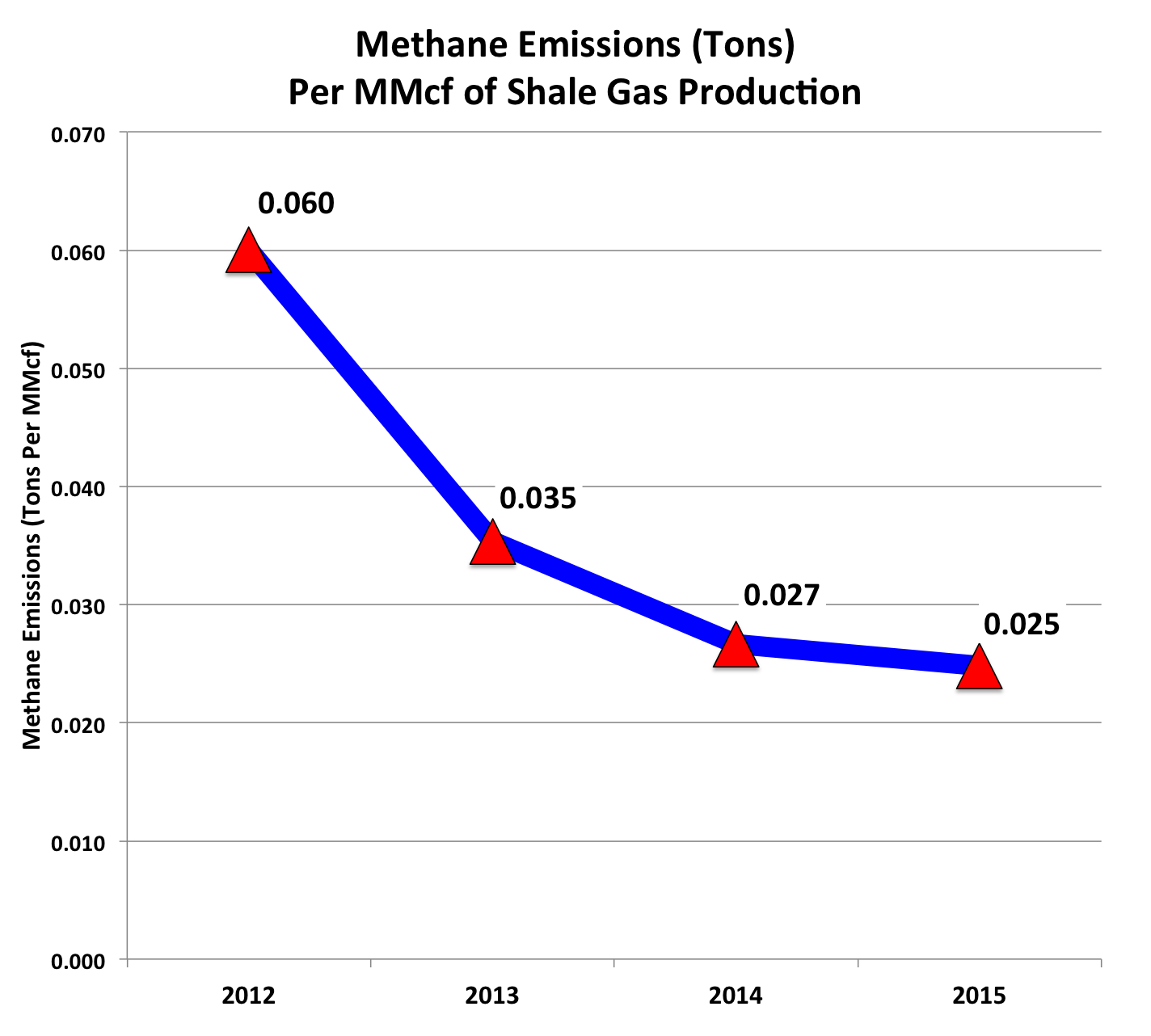 Fractivism, as it easy to see, is fake and fraudulent. The data couldn’t be more clear that the shale gas production related methane emissions are well under control in Pennsylvania and falling rapidly compared to that production. They’ve also fallen 8.5% in absolute terms since 2012. So, why is DEP so hell-bent to enact totally over-the-top regulations on the industry? Do they not study their own data? Or, are they trying to appease unappeasable fractivists who willingly use their data to spin yarns? Or, is this retribution for not accepting a severance tax?