The EPA is out with its latest greenhouse gas emissions from onshore petroleum and natural gas production data, showing emissions are way down. Thank fracking.

The EPA has a neat website tracking greenhouse gas emissions from onshore petroleum and natural gas production. The data shows they’re way down over the last five years in the Marcellus/Utica Shale region even though production is up and more data is being reported. Given that we know the substitution of natural gas for coal power generation has already reduced greenhouse gas emissions enormously, leaving the US with a superior record compared to other braggart non-performing nations such as Germany, this is remarkable. More winning is ahead.

The interactive EPA web page is remarkably easy to use. I decided to look at the data for the Appalachian Basin, which includes both the Marcellus and Utica Shales. Here are the results for the Eastern Overthrust Area, which is mainly the Marcellus Shale: 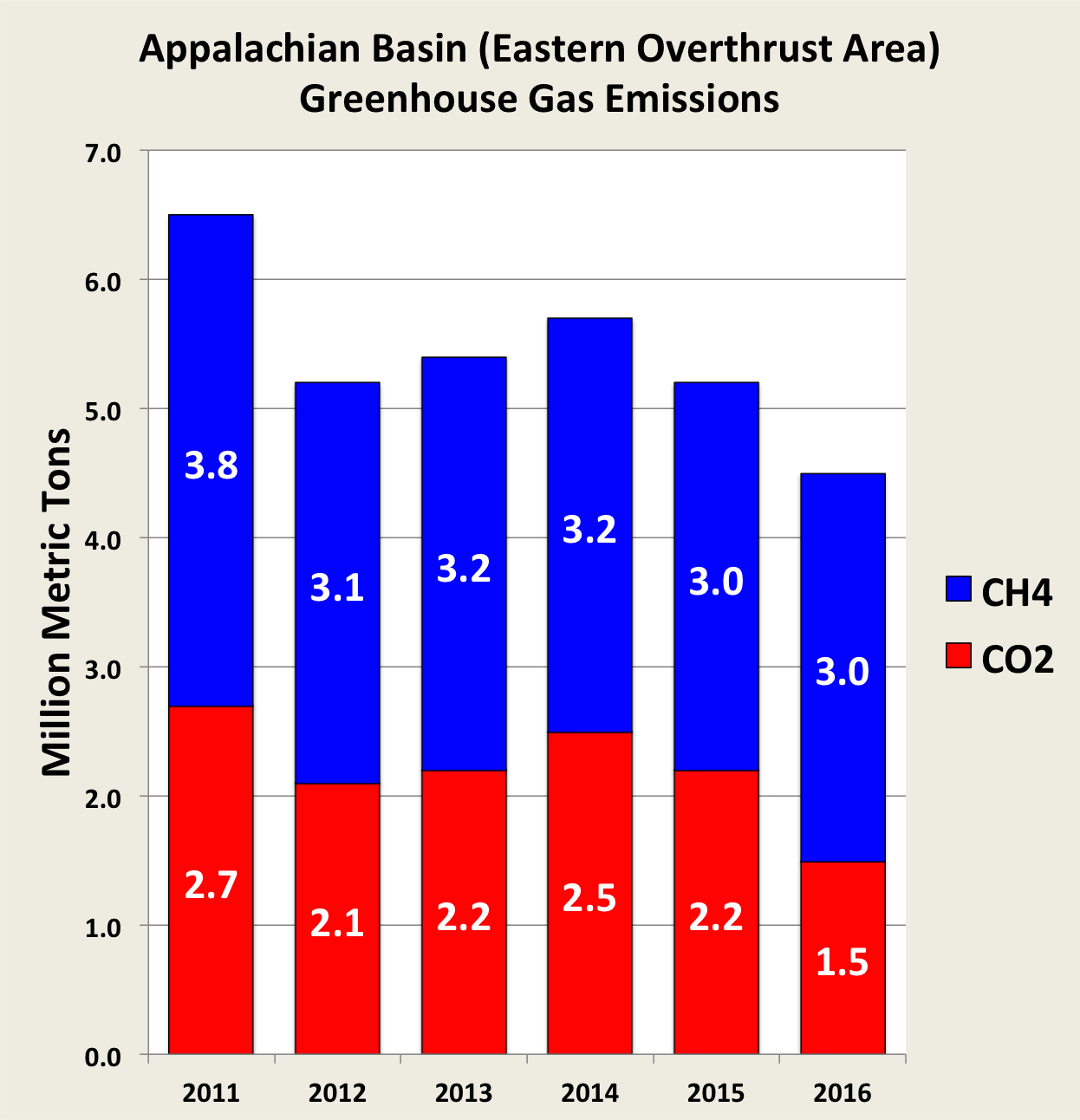 Take a hard look at these numbers. Methane and carbon dioxide are the principal greenhouse gas emissions associated with the natural gas industry. Methane emissions connected with onshore petroleum and natural gas production were down 21% in 2016 compared to five years earlier, even though both production and the number of reporting entities increased from 27 to 39. 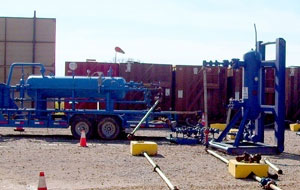 Carbon dioxide is down an incredible 44% and, altogether, greenhouse gas emissions are down 31% or over 6% per year against increased activity. This means were winning twice; once as gas is substituted for coal and a second time every year as new green completions technology improves the performance of the industry.

Now, let’s look at the Utica Shale side of things by examining the rest of the Appalachian Basin: 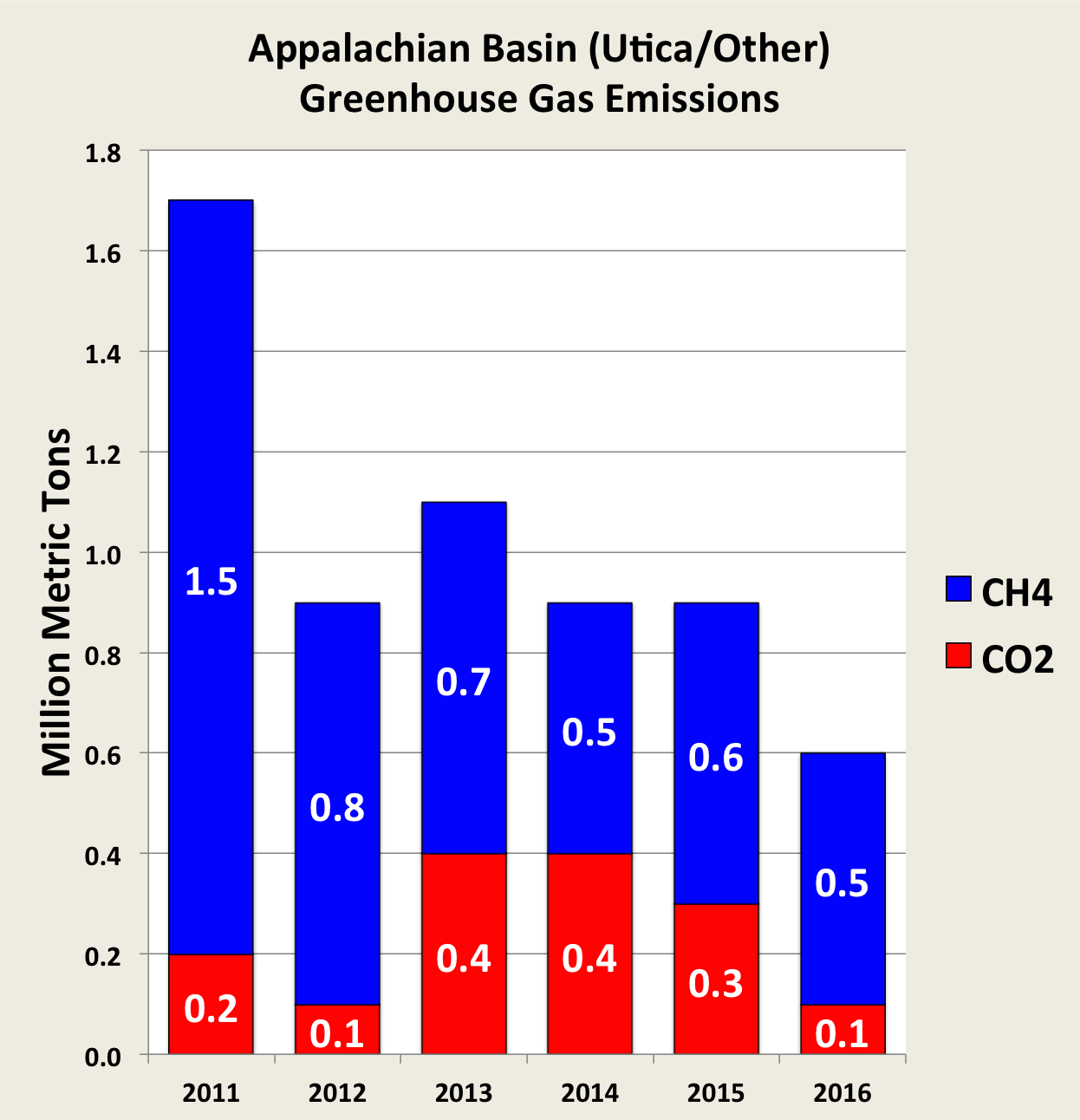 Methane emissions connected with oil and gas production in this portion of the Appalachian Basin declined by 67% or two-thirds, over the five years, while carbon dioxide emissions decreased by 50%` for an overerall decline of 65% in greenhouse gas emissions. This is a startling achievement given the growth in Utica Shale production. Once again, the number of reporting entities also increased from nine to 11, indicating the achievement is even greater than the absolute numbers might otherwise indicate.

What we see with these numbers is the impact of oil and gas technology, which is always several steps ahead of fractivists and politicians. The US is reducing greenhouse gas emissions both steadily and mightily, first by serving as a substitute for coal and then by further reducing the emissions connected with that gas production. It’s all happening because of fracking and horizontal drilling, the two technologies behind the shale revolution, and new green completions technology that is killing greenhouse gas emissions daily. That’s a lot of winning.

6 thoughts on “Fracking Is Killing Greenhouse Gas Emissions with Technology”