State Impact Pennsylvania is an embarrassment to honest journalism – just another fractivist outfit doing the bidding of the usual special interest funders.

The frustration quotient within the natural gas industry with State Impact, a National Public Radio (NPR) initiative, has been high for a long time, especially within Pennsylvania. Sponsored within the Commonwealth by radio stations WITF and WHYY, State Impact Pennsylvania has never seen a fractivist storyline it didn’t embrace, with enthusiasm.

It’s blog features its 10 most recent stories and, today, all 10 deal with natural gas and/or climate change issues with one being neutral and nine largely espousing the fractivist viewpoint. It’s all about “the fiscal and environmental impact of Pennsylvania’s booming energy economy, with a focus on Marcellus Shale drilling,” it says, which means it’s all about opposing it. State Impact Pennsylvania, in fact, is just another fractivist outfit.

Need evidence? Check out this ludicrous story about “Gas drillers still ignoring law to include women and minorities,” which purports to show gas companies are doing something of a discriminatory nature because they didn’t complete some surveys and didn’t attend enough job fairs. The article then uses a Marcellus Shale Coalition workforce survey to complain the industry workforce is 84% white or 16% non-white. 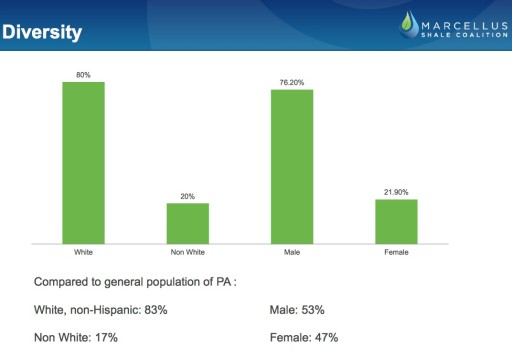 Never mind that only 4.8% of the population in the most active drilling areas (the Northern Tier region plus Greene, Lycoming and Washington Counties) is non-white and, therefore, the industry workforce is much more diverse than that of the areas where it does business. Never mind that the industry actively seeks to recruit minorities, as evidenced by the recent bus tour we reported on here. State Impact Pennsylvania had the storyline it wanted and stuck to it without so much as one computer click of effort to check out the facts.

Why is there such inherent bias from State Impact Pennsylvania – such desire to find the negative and focus on it? Well, that becomes very clear when one checks out their “About” page, which notes the support of the Allegheny Front (funded by the Heinz Endowments and the Park Foundation) and Essential Public Radio, which obviously exists to do some rainmaking for trial lawyers, a familiar pattern for those familiar with the Sustainable Markets Foundation and other trial lawyer fractivist initiatives.

State Impact Pennsylvania, therefore, is anything but non-partisan or public in nature. It’s just another fractivist outfit masquerading as an objective news source.