Most people don’t know what a PIRG is, but “public Interest research groups” are the way the trial lawyers make rain, taxpayers get fleeced and pigs get stuffed.

Such is the case with the New York Public Interest Group (NY-PIRG). Often falsely labeled as a “good government group” by naive reporters who don’t understand what it really is or who it represents, NY-PIRG has been scamming the public behind the scenes while it advocates public accountability out front.

Public interest research groups or PIRGs were created by Ralph Nader and an individual named Donald Ross back in the early 1970s who later went on to head the Rockefeller Family Fund. They were, from the very beginning, radical and anti-capitalist in nature. Less well known is the fact Nader and his PIRG outfits are rainmakers for trial lawyers and closely connected to groups such as Clean Water Action and Citizen Action, two we’ve written about here before. An attorney named Jay Halfon also has served as Executive Director of both the NY-PIRG and the New York State Trial Lawyers Association. 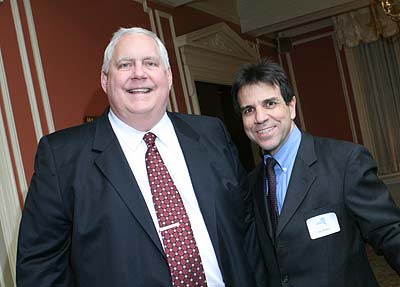 That same Jay Halfon serves on the board of Earthworks and 350.org, a Rockefeller front group and heads another such group, the Sustainable Markets Foundation (also funded by the Park Foundation) which helps underwrite all sorts of fractivist trash and funds Walter Hang’s anti-drilling advocacy. Fractivist activities throughout New York, in fact, are all funded by all the same people and do all the same things; a point we’ve made many times but can’t be reiterated enough. There only a couple of root sources for everything anti-fracking in New York and a few more for what happens elsewhere.

The NY-PIRG is in the thick of it all and recently put up this solicitation on its website: 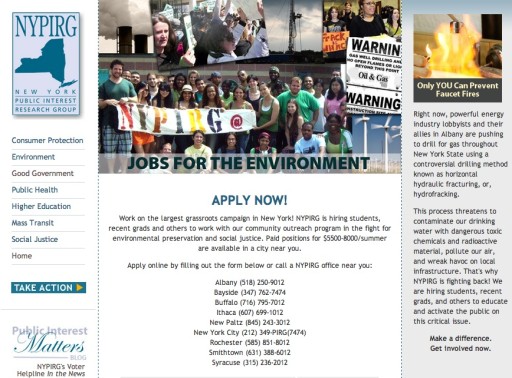 It’s the same sort of tacky appeal that Clean Water Action and Citizen Action have used in the past but this one is aimed squarely at students because that’s how the PIRG scam works. PIRG groups are funded at the expense of taxpayers who, though public colleges and universities, collect donations from student bodies who approve them as part of tuition fees and then get funneled back to the PIRG. It’s a seedy affair set up to take advantage of “much for minds” students by appealing to their idealism and letting their parents and the public pay for it.

Despite the small fees involved (designed to avoid complaints) some students have seen through the charade and challenged the whole thing. See here, here and here, for example. This type of fundraising has then been used to advocate for more taxpayer aid to universities to further more so much opportunities, pay students to go out and create issues for trial lawyers to exploit (“rainmaking”) and push the radical agendas of wealthy special interests groups such as the Park Foundation and the Rockefeller family. That’s the dirty little secret about the NY-PIRG.

There’s more, though, because the NY-PIRG is really two organizations; one incorporated as the New York Public Research Group Fund, Inc. and the other as New York Public Research Group, Inc.. Both are non-profit, but one is registered with the IRS as a 501(c)3 entity (a charity, in effect, that is not supposed to be doing any significant political activity or lobbying) and the other as a 501(c)4, which is specifically political in nature. They are, for all practical purposes, the same organization with the same address and Executive Director, but one can collect money in the form of tax-deductible charitable donations and the latter can do lobbying; two things that aren’t supposed to be mixed. It’s perfectly legal and the trial lawyers do the same thing but it flaunts the intent of the law.

The NY-PIRG lobbying entity, for example, had a negative fund balance of $809,955 at the end of August, 2012, according to its 990 return, $709,219 of which is owed to the charitable entity. See how it works? Tax-deductible charitable donations are simply funneled to the lobbying entity in the form of loans that aren’t or are only partally paid back. It’s a neat way of avoiding the law, while complying with it.  And, this is from a supposedly “good government group.”

You won’t find much on the NY-PIRG site about the way it raises money or shelters its lobbying activities. Despite the fact it constantly crows about public accountability, it offers little. That’s perhaps why it doesn’t rate so well by neutral groups looking at its disclosure policies, as this Charity Navigator site indicates.

Still, this isn’t the worst of it, because the NY-PIRG got a sweetheart deal from Attorney General Andrew Cuomo before he left office to become Governor of New York. He gave them a whopping $10 million, according to the Wall Street Journal:

On his last day as attorney general, Mr. Cuomo announced he awarded NYPIRG, which has had a contentious relationship with other recent governors, a $10 million grant for a national ad campaign to help promote NYPIRG’s higher-education activities. The money, more than twice the group’s annual budget, came from Mr. Cuomo’s settlement of a student-loan probe.

Yes, Cuomo gave the NY-PIRG $10 million to spend promoting their radical special interest agenda. No doubt they’d say its a separate fund but money is fungible and we know what the NY-PIRG’s “higher-education activities” consist of, don’t we? Talk about stuffing the PIRG! Talk about rainmaking!

6 thoughts on “Stuffing the PIRG and Making Rain”