Gas Free Seneca, ostensibly formed to oppose an LPG storage facility in Watkins Glen, New York, is just another fractivist outfit, another one of those outrageous shale gas stories.

When Inergy Midstream (now Crestwood) bought an existing natural gas storage facility in Watkins Glen, New York and launched plans to expand it and use another of the former salt mines in the area as a propane (LPG) storage facility, a group called Gas Free Seneca was formed to fight both projects. That group, financed indirectly with help from the Park Foundation and Sustainable Markets Foundation (Rockefeller family), has morphed into a group whose stated purpose is to “protect Seneca Lake, its environs and local home-grown businesses from the threat of massive industrialization.” That includes fracking or anything else that might offend the sensibilities of Planet Ithaca types who live along the Finger Lakes.

The propane storage facility, nonetheless, has taken the brunt of the opposition from Gas Free Seneca, and the co-founders of the group, Yvonne Taylor and Joseph Campbell, don’t practice what they preach.

Gas Free Seneca is one of those unincorporated and unaccountable groups the Park Foundation and the Sustainable Markets Foundation love to employ as fronts in their battle against fracking. Two individuals, Yvonne Taylor and Joseph Campbell, are identified as the co-founders of Gas Free Seneca and they push the anti-fracking anti-LPG message at every opportunity with signs such as this one, also used as one of their logos: 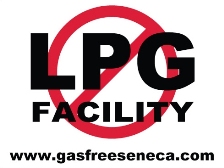 Here, too, are a couple of the statements Taylor and Campbell have made against the proposed LPG storage facility:

“It’s a peaceful tranquil place certainly not a place where you would imagine your health and safely being at risk but if inergy’s plans go through, I’m extremely worried for my health and safety.” (Taylor remarks to WENY on 3-13-13 subsequent to building her new home on Seneca Lake, two years after the LPG project was announced).

“This ill-conceived plan to store hundreds of millions of gallons of highly flammable and potentially explosive methane gas and liquid propane and butane threatens not only the lake and the safety of those of us who live here, it threatens the very fabric of the growing and sustainable economy we have built here over generations” (Campbell remarks to Finger Lakes Times, 1/20/14).

Then there is this video of Yvonne speaking at an LPG opposition event (click to play): 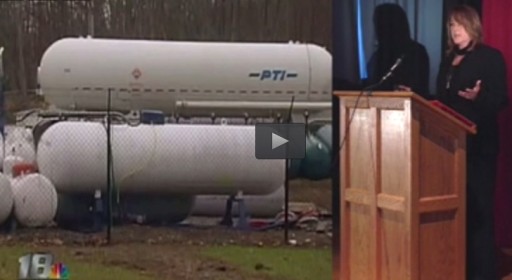 Taylor hadn’t built her home yet when she spoke on April 14, 2011 and, at 4:52, said she was reconsidering her plans to do so. Perhaps, but highly unlikely, given the fact her engineer had already, on March 19, 2011, applied to the Schuyler County Watershed Protection for a permit to put a septic system on her tiny 0.44 acre lot in the Town of Hector right on the shore of Seneca Lake.

Interestingly, that application indicates her septic system leach field is located but 20 feet from a stream channel that feeds directly into Seneca Lake perhaps 100-150 feet away. The requirement in New York State is a 100 feet setback, so she is a full 80% below standard and apparently not so worried about the water quality of Seneca Lake when it comes to her own enjoyment of her property. Interesting.

More interesting is this; Taylor and Campbell built the home in 2012 according to tax records (he reportedly did a good part of the work himself) and guess what heat source they chose to use–liquified petroleum gas, otherwise known as propane or LPG. Here’s their new home and you can see the tank to the right. 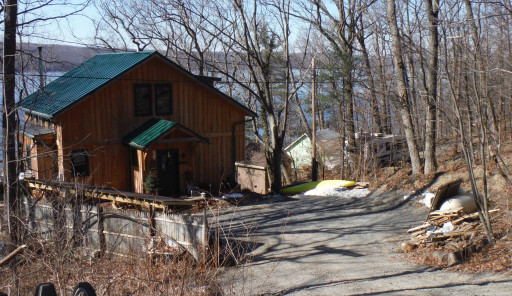 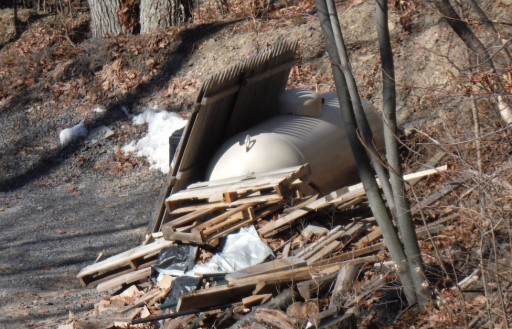 And, here’s the excerpt from the public tax record confirming it:

Where do people like Taylor and Campbell get the gall to engage in such blatant hypocrisy? She and Campbell want the benefits of LPG but, apparently, don’t want anyone else to have them if the infrastructure required to deliver those benefits is to be anywhere hear them. She uses pictures of propane to suggest danger when it comes to the proposed facility, but happily puts similar tanks on her own property.

It’s hard to understand, but there’s plenty more where that comes from. She makes a point of emphasizing how her ancestors enjoyed Seneca Lake for generations before her and how tragic it would be for any “industrialization” to intrude upon the tourism that undergirds much of the local economy. Yet, we know her family wasn’t put off by the salt plants in Watkins Glen, very industrial enterprises that began in 1890.

We know, too, she isn’t put off by all the traffic and fossil fuel consumption connected with racing. She proudly extols the benefits of the famous Watkins Glen racetrack (imagine trying to build that today with groups like Gas Free Seneca around) and even provides a picture of herself driving the pace car some years ago. 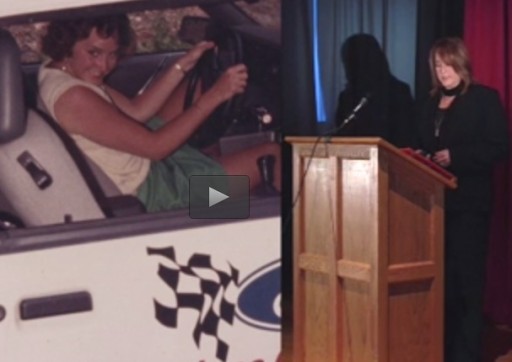 These are the types of double-standards fractivists seek to apply as they align themselves with the Parks and Rockefellers in the elitist fight against fracking, using projects such as the LPG storage facility as leverage.  The Park Foundation, for example, not only funds the Sustainable Market Foundation through which Gas Free Seneca raises money, but also the DC Bureau, which generates misleading news reports about it, and EarthJustice, which represents them in court.

Look deep, in fact, and you find everything Gas Free Seneca does is, indirectly at least, a function of the Park Foundation. Folks such as Taylor and Campbell are their willing dupes, in it as NIMBYs and attention-seeking ideologues, but ultimately just pawns in the bigger chess game. The fact they are ultra-hypocritical means little or nothing to the real players. But, it ought to mean something to everyone else. You can’t be a credible opponent of an LPG facility when, in the middle of the debate, you choose to install a LPG heating system in your home.