The NY Green Bank is another sub-prime lending bomb being primed to go off down the road while clean energy could be delivered with natural gas.

When government picks winners and losers, it tends to make losers out of winners.  This is a lesson that seems to be impossible for man to learn, despite a long list of failures that includes synthetic fuels, ethanol, Solyndra and any number of others that might have turned out differently had government not blessed them with so much to waste and pushed them before their time.

The Nobel Prize winning economist  Friedrich Hayek called this tendency the “fatal conceit.” Others simply call it pride; the idea that a few intelligent people can make smarter decisions than the many. Intelligence seldom trumps experience, but that hasn’t stopped many otherwise intelligent people from trying to prove things would just be better with them in charge. The NY Green Bank is the latest iteration of this vanity. What could possibly go wrong?

How the NY Green Bank Plan to Use OPM

The NY Green Bank is the corollary to New York Governor Andrew Cuomo’s solar initiative, about which we wrote a few days days ago. That little $1 billion program is already set up to to pass out gifts of other peoples’ money (OPM) to companies who are Cuomo donors such as Time Warner Cable, who hardly needed it.

Cuomo’s two biggest groups of donors are real estate interests and securities firms. The former are, as we demonstrated, already grabbing the solar OPM. The NY Green Bank is the piggybank that has been created to flow money through big banks and security firms so they can grab as much of it as possible as it goes through their hands.

The NY Green Bank is not a bank but an agency of state government, a part of the New York State Energy Research and Development Authority (NYSERDA). It has been capitalized by extorting $165.6 million of “clean energy surcharges on the State’s investor owned utility customers” plus another $52.9 million in auction proceeds from the Regional Greenhouse Gas Initiative, which is another extortion scheme based on selling emission allowances. Now the money extorted from customers and ratepayers will be used to finance pet projects and make money for other favored Cuomo donors.

How did this slush fund come about? Well, according to the NY Green Bank website, a market assessment report developed by Booz & Company, which now goes by the weird name of “Stategy&,” identified several financing barriers prevalent in the New York clean energy market. Strategy& is a PricewaterhouseCoopers (PwC) consulting company. PwC is a Cuomo donor.

While the NY Green Bank website tells us it is “just one component of the State’s new chapter on energy policy that enables self-sustaining private markets and reduces dependence on future subsidies” this document shows it is more likely to produce future Solyandra boondoggles. Here is an excerpt from the market assessment: 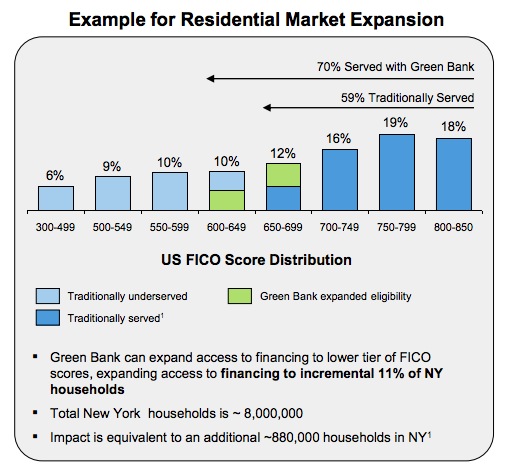 Notice, especially, the reference to using the NY Green Bank to extend access to financing 11% of NY households with inadequate FICO (credit) scores. Many readers will recall Andrew Cuomo tried this before when he was HUD Secretary by arranging to extend mortgage credit to millions of non-creditworthy homebuyers. It was a great deal while it lasted and that was long enough for Andy to exit stage left and leave the rest of the country with the ensuing mess. Now, he’s doing a repeat using “clean energy” as the facade and, as the market assessment indicates, Green Bank return on investment “is significantly sensitive to default risk.” Only the names have changed. What could possibly go wrong?

There’s a lot of money to made in the meantime by the bankers and security firms who will handle the money. They will likely incur little risk, however, as the following illustrative example from the market assessment demonstrates. The loan issuers will be protected against losses themselves by a loan loss pool set using OPM extorted from the customers and ratepayers and hidden in their utility bills, among other things. 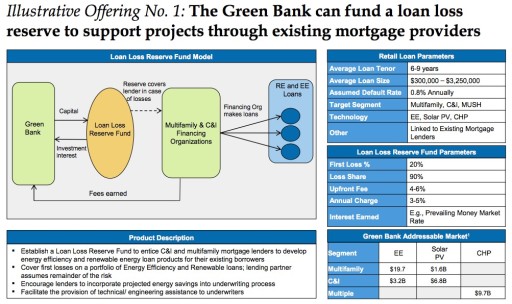 The danger is also readily apparent in the Public Service Commission (PSC) creating the NY Green Bank, where it is acknowledged the NY Green Bank will “focus on projects that are economically viable but not currently financeable due to the existence of these barriers, which include an undeveloped secondary market for clean energy financing.” Oh yes, secondary markets. Where have we heard that before? Do the names Fannie Mae and Freddie Mac ring a bell? They should.

NYSERDA presented the PSC with the optimistic scenario everyone wanted to hear, of course:

The Green Bank will be able to redeploy its capital in successive rounds of financings, and to redirect it as the clean energy financing markets evolve, without the need for additional ratepayer contributions. NYSERDA also states that the Green Bank will earn sufficient market returns on its investments to become self-supporting. Thus, if successful, the Green Bank may allow a partial shift away from the subsidy model for clean energy funding.

Tellingly, though, NYSERDA was quick to distance itself from its own scenario when pressed, offering this PSC accepted excuse:

Multiple Intervenors comment that this shift of funds should be accompanied by a timeline for the reduction and eventual elimination of customer surcharges used for clean energy projects. The Business Council of New York State also argues that the creation of the Green Bank should be accompanied by a plan to reduce surcharges. NYSERDA responds that while the Green Bank might result in long-term reduction of ratepayer costs, the request to outline a schedule for such reduction is premature. NYSERDA explains that data on market response to the Green Bank and the results of initial Green Bank funding will be necessary before NYSERDA can develop recommendations for changes in subsidy programs.

Who Will Run the NY Green Bank (Beside Cuomo)?

Then, there is the matter of who’s running the NY Green Bank. The President, Alfred Griffin, comes from Citigroup (owner of Citibank, assembled by a Rockefeller descendant) which was one of those banks bailed out under TARP in 2008 due to outrageous sub-prime lending. Citigroup agreed to a $285 million civil fraud penalty in 2011, but was awarded Global Bank of the Year in The Banker‘s 2013 annual awards, which tells you something about banking standards, I guess. Citigroup is a major Cuomo donor.

The Chief Operating Officer is Caroline Angoorly, who comes from Green Tao, LLC, a commercial advisor to the closely associated firm where she worked prior – J.P. Morgan, another Cuomo donor. She has been heavily involved in J.P. Morgan’s efforts to take advantage of carbon-credit trading governmental schemes, by promoting “carbon charisma” through its “ClimateCare” program. It didn’t go so well, apparently:

But efforts to create a U.S. emissions trading scheme were collapsing by 2010, while the European Union’s cap-and-trade system, the world’s biggest, went into freefall amid a glut of credits and a dearth of confidence in new global curbs. ClimateCare’s management took the firm private in 2011.

No reason we shouldn’t try again with OPM extorted by the state from ratepayers, right? What could possibly go wrong?

Perhaps the experience of Nicholas Whitcombe, the new Managing Director of NY Green Bank provides the answer. Whitcombe comes from the US Department of Energy. The NY Green Bank website says this (emphasis added):

Prior to joining NY Green Bank in 2014, Nicholas was a supervisory senior investment officer in the Loan Programs office at the U.S. Department of Energy (DOE) where he was instrumental in leading the negotiations for several nuclear loan guarantees, including over $8.3 billion in commitments to finance the construction of the first nuclear power plant to be constructed in the U.S. in 30 years. He also led more than $1 billion in loan guarantees for distributed solar generation projects and served as program director for the Advanced Technology Vehicle Manufacturing loan program. In addition, he worked with White House officials and DOE leadership to assist in achieving clean energy policy goals, including advocating loan guarantees to induce consumer demand and build out of national energy infrastructure.

We’re all pretty familiar with how those solar guarantees worked out, aren’t we? Solyndra is the most infamous case but there are numerous others, such as Abound Solar, Inc., for example. They all took the same course. Great ideas were used to grab money too freely available for projects on too big a scale, for which the feds lowered standards in an attempt to pick winners, getting losers instead. Whitcombe was also involved with the loan to Fisker, the electric car maker. Here’s an excerpt from a story on that debacle:

“We make our calls based on the merits of the transactions,” Whitcombe said.

Yes, I’m sure that’s exactly how he’ll do it at the NY Green Bank, too. What could possibly go wrong? He’ll do it with the best of intentions, of course, and that’s all that matters for some folks but for realists, intentions don’t matter. It doesn’t matter either that banks make money–it’s a heck of a lot better than the alternative. They shouldn’t make it on the backs of ratepayers forced into the transaction, though, and they shouldn’t make it by investing this OPM in sub-prime loans, which is what NY Green Bank apparently plans to offer. None of this is to denigrate solar, electric cars or “clean energy” of any kind. Indeed, I expect some of the NY Green Bank money will probably go to natural gas related projects here and there, but I oppose that, too. Natural gas doesn’t need help from ratepayers to steer money from one energy source to another. It’s a bargain on its own with no subsidies. It’s already cleaning New York City’s air and delivering economical energy to a region that hasn’t often known of it.

If Governor Cuomo really wants clean energy, he can get it easily by allowing fracking, which won’t cost him anything, except maybe some campaign donations and a few Manhattan votes. He has plenty to spare in both categories and allowing fracking would revive the Southern Tier and replace those votes. Will he do it? Well certainly not until after the election. Unfortunately, everything is political in New York or we wouldn’t even have a NY Green Bank there.

4 thoughts on “The NY Green Bank – What Could Possibly Go Wrong?”