The NY Green Bank has now been up and running for more than two fiscal years and is losing money at an increasing rate, but there’s nothing to worry about.

Back in May, 2014, I posted an article here entitled “The NY Green Bank – What Could Possibly Go Wrong?” Then, in March, 2015, I took another look, noting the whole thing was, essentially, “another sub-prime lending scheme pushed on New York’s State Energy Research and Development Authority (NYSERDA) and Public Service Commission by New York’s crime boss governor.” Now, here we are, more than a year and a half later, and all the NY Green Bank has to show for itself is increasing losses and decreasing rates of return. But, it’s all to be expected they say; nothing to see and nothing to worry about it. 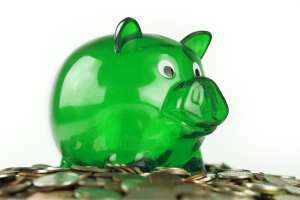 It doesn’t take a financial wizard to read between the lines on that one – this entire NY Green Bank thing rests on a foundation of optimistic guesswork. The Independent Power Producers of New York, which is a group of companies already doing renewable projects, seems to be likewise concerned the NY Green Bank will be diverting funds away from its projects into the governor’s pet projects with no particular financial return requirements…

But, of course, it’s intended that way because this is nothing more than a corporatist slush fund or piggy bank intended to reward Cuomo’s friends…

These are the people for whom the NY Green Bank is designed to make money at the expense of ratepayers already burdened to the hilt by New York’s green political correctness agenda and which Cuomo is shifting into high gear with little or no accountability.

The NY Green Bank, in other words, has lost $5.6 million to date and will be rewarded with more money to loan out, based on how fast the bank can push it out the door, up to total of $1 billion. Moreover, it’s Annual Financial Metrics report shows the following: 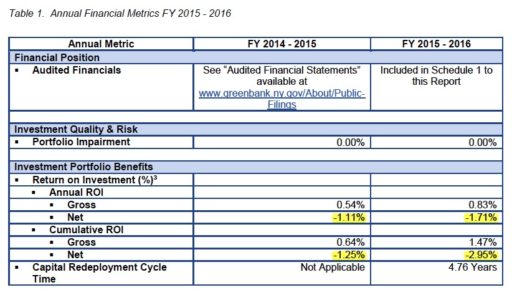 Rates of return are already headed south, but it’s nothing to worry about we’re told. It’s all part of the plan:

All reported figures align with what is expected of NYGB in the period between start-up and becoming a mature operating entity. These Metrics are consistent with comparable new and growing investment organizations –  private or public. NYGB remains on track as it progresses through a multi-year maturation period during which its initial Investment Portfolio is fully established (with investment of all Available Capital) and self-sufficiency is reached.

Interestingly, last year’s version of the report stated self-sufficiency was “Projected to be by the end of FY 2017 – 2018” but this year’s report drops that prediction.

The NY Green Bank has lined up two big loans recently, according to its September quarterly metrics report. One is to Vivint Solar:

NYGB has committed $37.5 million as part of a five-year term loan for Vivint Solar. Vivint Solar is a national residential solar provider that installs solar energy systems at no upfront cost to customers, and generates revenue through 20-year power purchase agreements and lease agreements. Over 11% of Vivint Solar’s current portfolio is located in NYS and Vivint Solar has placed an emphasis on growing its business in the State. Vivint Solar engaged Investec Bank PLC to structure, arrange, and syndicate a $313.0 million credit facility to refinance an existing aggregation facility.

NYGB’s participation provides additional needed liquidity to support Vivint Solar’s need for additional solar deployment capital. It also helps to establish a medium-term lending market as an alternative to refinancing through the traditional asset-backed security market. As the first transaction of its kind, this term loan has drawn in new investors and financial institutions into the marketplace, enhancing liquidity, decreasing the cost of capital for solar developers and installers, and helping reduce the cost of solar power to homeowners.

So, what are the prospects for Vivent Solar? Well, according to the Motley Fool Guru Analysis, they’re not so hot:

This methodology seeks companies with a minimum trailing 12 month after tax profit margin of 7%. The companies that pass this criterion have strong positions within their respective industries and offer greater shareholder returns. A true test of the quality of a company is that they can sustain this margin. VSLR’s profit margin of -228.84% fails this test.

And, here is how the stock has done over the last year, courtesy of Google Finance – Yahoo Finance – MSN Money: 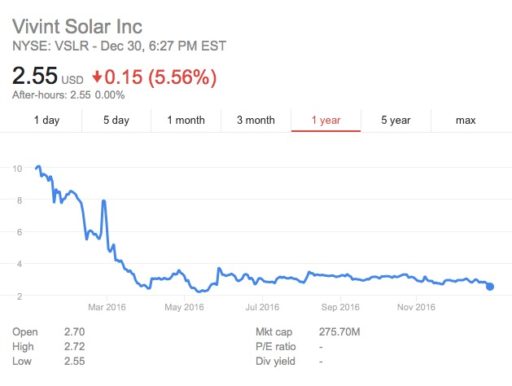 Now, don’t you feel better? Everything’s just fine, you see. Governor Corruptcrat is using your money (if you pay an electric bill in New York) to rescue a company that’s losing money and planning to make it up in volume to burnish his green credentials. That’s what the NY Green Bank is all about, after all — that and rewarding some political cronies. One Vivant Solar investor, in fact, is on this list of Cuomo fat cat donors. It’s Jim Simons, father of Nat Simons, who is the man behind Renaissance Technologies LLC, which bought $1,308,000 (some 493,455 shares) of Vivent just prior to the announcement of the NY Green Bank deal.

7 thoughts on “NY Green Bank Losing Money, But Not to Worry”