The “peer reviewed health studies” waved around by Howard Zucker to justify his own sham conclusions included a fraudulent report peer reviewed by fractivists.

We were thrilled to see the work of our friend Simon Lomax profiled by FOX News yesterday. Simon is one of the master researchers at Energy in Depth. He’s an investigative journalist by trade and it showed in his expose on what amounts to a peer reviewed health con by New York Governor Andrew Cuomo’s team of political hacks.

You can read Simon’s original report on the Breaking Energy blog but here are a few of the key excerpts:

During a Dec. 17 press conference, acting New York health commissioner Howard Zucker held up the paper – literally – as an example of the “bona fide scientific literature” that supported his decision to block shale gas development in the Empire State. The paper, which claims oil and gas wells are producing “potentially dangerous” pollution levels, was written by authors with close ties to environmental groups, including the anti-fracking organizations Global Community Monitor and the Center for Environmental Health.

GCM and CEH promoted the October 2014 paper as peer-reviewed science. But according to the journal that published the paper, those peer reviewers were Sandra Steingraber, Robert Oswald and Jerome Paulson. Steingraber is the co-founder of New Yorkers Against Fracking and, according to that group, “is a central voice in the fight against fracking.” Oswald co-authored a book that claims “fracking poses a dire threat,” campaigned to ban shale gas development in his upstate New York home town, and has advocated that local zoning laws be used as a “weapon in the war against fracking.” Paulson, a physician based in Washington, D.C., has teamed up with Steingraber and other activist groups to lobby against shale gas development in New York and “has called for a moratorium on all drilling,” according to The Public Record…

The bias of these peer reviewers is especially troubling because the authors of the paper are also active opponents of the oil and natural gas industry, and were also less than forthcoming about it.

For example, in the paper, the authors deny having a “competing financial interest” and five of the paper’s seven authors admit they are “are employed by non-profit organizations whose mission is to reduce exposure to toxic chemicals.” But they don’t disclose that their groups actively oppose oil and natural gas development, including the use of hydraulic fracturing to produce energy from deep shape formations.

More to the point, when these authors are getting paychecks from groups that oppose oil and gas development, they clearly have a competing financial interest that should have been disclosed…

Then there’s the case of David O. Carpenter, one of the paper’s seven authors, who theoretically has no conflicts, according to the “competing interests” disclosure. Carpenter listed his affiliation as the University at Albany’s Institute for Health and the Environment, but failed to disclose working with shale gas opponent – and his own peer reviewer – Sandra Steingraber at Concerned Health Professionals of New York. This group has spent years lobbying Gov. Cuomo and other state officials to block shale gas development in New York. For example, in March 2014 Carpenter sent a letter with Steingraber and other shale-gas opponents to Gov. Cuomo defending the state’s six-year “de facto moratorium” and demanding “New York State take a leadership role in the nation by announcing a formal moratorium.”

The same letter to Gov. Cuomo claimed there is a “lack of any evidence that fracking can be done safely,” and in a recent interview with Russia Today, Carpenter said he believes it’s “dangerous” and “should be stopped.” Again, this fringe position has been rejected by environmentalists who work inside the Obama administration. For example, Interior Secretary Sally Jewell says the activists who claim “fracking is dangerous and should be curtailed full-stop” ignore that “fracking has been done safely for decades.”

The authors’ financial and non-financial ties to anti-energy activism should have been disclosed in the paper, as the World Conference on Research Integrity makes clear:

“Authors should disclose relevant financial and non-financial interests and relationships that might be considered likely to affect the interpretation of their findings or which editors, reviewers or readers might reasonably wish to know.”

… these new revelations about the “bucket brigade” study take the debate to a new level. Now we know at least one of Zucker’s “bona fide” research papers was the creation of shale gas opponents who appear to have found a way to subvert the peer-review process. Even more disturbing, some of those activists – Steingraber and Carpenter in particular – are senior figures in the campaign that successfully lobbied Zucker and Gov. Cuomo to block shale-gas development in New York.

This means shale-gas opponents wrote a paper, reviewed a paper and then convinced the State of New York to act upon the findings of a paper as though it was independent research. It also means the paper was misrepresented to the scientific community and the general public as “bona fide” research, not just by the authors and the reviewers, but by acting New York health commissioner Howard Zucker himself.

It doesn’t get much worse than this. Or, does it? The FOX News story quotes Steingraber as follows:

Reached by FoxNews.com, Steingraber and Oswald said they did not disclose their positions because they have taken no money from the movement. Further, they do not work directly with any of the authors or have academic relationships with them. As scientists, they said, they have found evidence that fracking creates health hazards, and it is their professional and ethical obligation to speak out about it…

Oswald, a professor of molecular medicine at Cornell University, who has written extensively on the dangers of fracking, is an admitted opponent and also peer-reviewed the study. He told FoxNews.com he did not believe he needed to disclose his positions beforehand.

“What Lomax said is absolute and complete nonsense – anybody who has the expertise to review a paper has some opinion on the subject,” he said. “I’ve reviewed thousands of papers and I always have some sort of opinion of the area, but it does not really stand in the way of my objective view.”

“Look at me, I’m Sandra Dee” Steingraber is the queen of self-righteous posturing, but her fanciful claim to receiving no financial benefit from her opposition is as phony as it gets. There was, of course, that $100,000 prize from the Heinz Endowments to further her work, but even assuming none of that went to her as remuneration, are we to believe the publicity she gains doesn’t help sell her books or further embellish the health warrior image she so carefully cultivates on her website? Are we to accept that an individual who describes herself as “an acclaimed ecologist and author…[who] brings a clear, lyrical voice to the complex evidence of biology” gains nothing from her advocacy? It’s a ludicrous assertion. Here’s the opening screen for one of her YouTube videos: 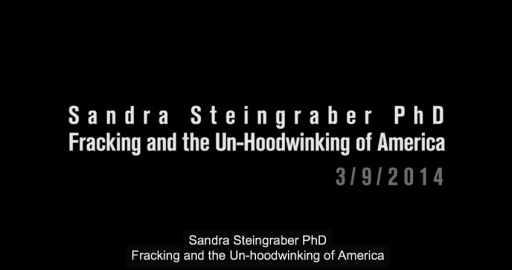 Likewise, Oswald (one half of the Bamberger and Oswald junk science team) is full of it when he suggests it’s a matter of being able to remain objective while holding an opinion. The two of them are associates of Tony Ingraffea and part of the stable of fractivist junk scientists available on call to do the bidding of the Park Foundation and Rockefeller clan. They are also the authors of this book: 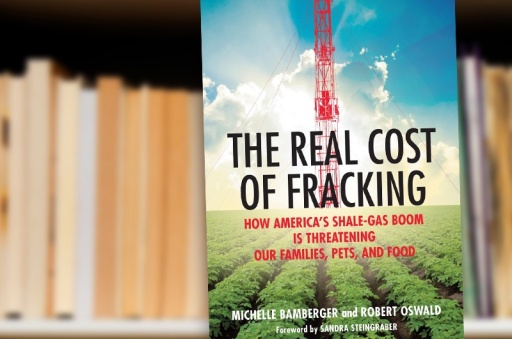 Do Steingraber and Oswald look like people who can be objective on the subject of fracking?

Of course not. This “peer reviewed” health “study” violated every rule of peer review. It was pure junk science and was, to his everlasting shame, willingly used by Dr. Howard Zucker to fulfill the political wishes of a corrupt governor he wanted to please in hopes of getting a permanent appointment as Health Commissioner. This is how fractivist sausage is made and it’s poisonous.