There’s seems to be no end to the fractivist journalism that substitutes from the real thing, so much of it financed by special interest foundations.

Fractivist journalism, for which StateImpactPA is the archetypical example, never seems to ebb. As we’ve noted many times, StateImpactPA is a sister entity to at least three other William Penn Foundation funded fractivist outfits; the Clean Air Council, the Delaware Riverkeeper and PennFuture. What’s most annoying, though, is the degree to which these organizations imagine their readers are too stupid to notice.

The last couple of days have produced some prime examples of what I’m talking about, Take, for example, this article by Katie Colaneri, which followed up a related one the day before, both regarding the prospects for Philadelphia becoming an energy hub — “the next Houston.” The second piece was headlined as “Philadelphia fails to find common ground on energy hub,” as if the city’s 1.5 million residents had actually tried to reach agreement, excerpts of which follow (emphasis added):

The prospect of Philadelphia as an “energy hub” has some seeing dollar signs and good-paying jobs. Others worry about the continued impact of fossil fuel use on climate and exploding gas pipelines.

StateImpact Pennsylvania has learned that Drexel University and the University of Pennsylvania quietly brought both sides together for a series of meetings in an effort to find common ground.

However, the effort has stopped just short of building consensus…

[Mark Alan] Hughes, [director of the University of Pennsylvania’s Kleinman Center for Energy Policy] said the point was not to debate climate science or the whims of the energy market, but to get the group to agree on a portfolio that included natural gas, as well as alternative energy sources.

“That we could start with a certain mix and then, over time, say a time period of 35, 50 years, we could change that mix in a really intentional way to try to achieve maybe some other goals like climate goals,” he said.

After two meetings, the group began hashing out the idea of starting with natural gas as a “path forward” with more renewables to come later.

But that didn’t fly with some environmentalists like Joe Minott, executive director of the Clean Air Council. Minott said he is not naive to the fact most Philadelphians heat their homes with natural gas, but that he would have preferred the conversation start by dealing with climate change.

“We should be thinking first and foremost about energy efficiency, wind, solar and then how do we make up for the rest of it,” said Minott.

Masur argues a nonprofit like his has more to lose from compromising than the largest oil refinery on the East Coast.

“All we have is our position,” he said.

After a fourth meeting in February missing some original group members, Hughes and the other conveners have put the process on pause. He said the group came close to creating a final document, but there are still no plans for that press conference.

Those who left the group say they would be willing to come back to the table in the future, which gives him some hope.

Meanwhile, this week, energy hub protestors – including members of the Clean Air Council – were back out with their signs to oppose a proposal by Philadelphia Energy Solutions to build a new terminal for oil tankers.

This is such deceptive reporting, it’s almost impossible to know where to begin until you think about it for 30 seconds and realize these are all (with the exception of Philadelphia Energy Solutions) the same people, funded by the same special interest; the William Penn Foundation. The whole thing is one big act; a con job intended to portray the false impression there really is an honest dispute, radical environmentalists really are reasonable and academia is just trying to get it right; when the truth is that every one of these groups is funded by the same wealthy trust-funders trying to orchestrate the oil and gas industry out of existence. Consider these William Penn Foundation grants (from 2015):

The Academy of Natural Sciences, of course, is an off-shoot of Drexel University, the cozy new home and presumed payoff to Carol Collier for ensuring nothing happened with gas drilling while she was employed at the Delaware River Basin Commission (DRBC) and that agency was then on the Foundation take as well. Bloomberg Business says she also got rewarded with a seat on the William Penn Foundation Board of Directors, although she doesn’t show up on their website and the Foundation hasn’t filed a full 990 return since 2013 to check for sure.

Regardless, these grants reveals the William Penn Foundation has funded the two universities we’re supposed to believe “quietly brought both sides together,” both of the radical fractivist groups involved (PennEnvironment and the Clean Air Council) and the StateImpactPA organization making a story of the whole thing. The paychecks of everyone other than the Philadelphia Energy Solutions CEO might as well have been signed by the Haas family of trust-funders who run the show at their family’s private foundation. The whole damned thing is one giant game of charades designed to give David Masur of PennEnvironment (the faked pictures people) and Joseph Otis Minott, Esquire of the Clean Air Council some street cred as worthy participants in the debate, as if they were entitled to serve as the voice of Philadelphia.

This is how fractivist journalism, indeed fractivism as a whole, infiltrates, distorts and takes over the conversation. It’s a scam, made even worse by the fact it’s all done under the cover of a supposed “charity” operating on a tax-exempt basis. It’s nothing of the sort, but, rather, a highly political outfit extending its undue influence everywhere while this family of oligarchs lords it over Penn’s Woods as if the whole thing were its private manor and the rest of us were its serfs. It’s nothing less than outrageous; an echo chamber run for the benefit of the ruling gentry class.

The whole thing is given away by David Masur’s comment about only having his “position” to negotiate, as if that weren’t also true for the oil and gas industry. Such idiocy is what passes for argument in fractivist journalism and, of course, Katie Colaneri wasn’t going to challenge it; she works for the same people, after all, and her organization regularly shuts down commenters on its site who dare to challenge the company line expressed there. What Masur is really saying is that he will never, ever compromise because that would undermine the purpose of PennEnvironment, which is not to improve but to stop things.

That’s what Masur is paid by the William Penn Foundation and others to do and he knows it. If the Foundation truly wanted him to continue to participate in discussions and act reasonably, it wouldn’t fund him. Rather, Laura Sparks, its Executive Director, would call him up and it’s not hard to imagine the conversation:

“Hey, Dave, we’d really appreciate you participating in finding some common ground here and helping our city achieve some consensus on this energy hub thing. How about giving up that fake picture stuff and sitting down to work something out; you know what I mean? We gave you $375,000 last year to tide you over and we think it’s really time to bury the hatchet and make some progress here. We are the City of Brotherly Love, you know. How about it, Dave?”

Well, Laura Sparks would, of course, talk in much more cultured tones, use much less direct language and preface the whole thing with laudatory remarks about his good work, but it’s not hard to imagine a conversation along these lines or what the response would be from Masur (or Minott). How high should i jump would be the only relevant question. That Masur and Minott feel comfortable in abandoning the discussion short of the elusive “consensus” and heading back to the streets in protest tells us the whole thing is a Potemkin Village sham. Neither could afford to walk away if the William Penn Foundation wanted them to stay. It’s that simple.

The sham couldn’t be perpetrated, though, if StateImpactPA wasn’t there to disseminate the somber fake message, perhaps best captured in this photo from the first story; a photo intended to convey the seriousness of the opposition but, in reality, only depicting its sad sack nature of the pampered trust-funders in uniform as they signal their virtues for the rest of us: 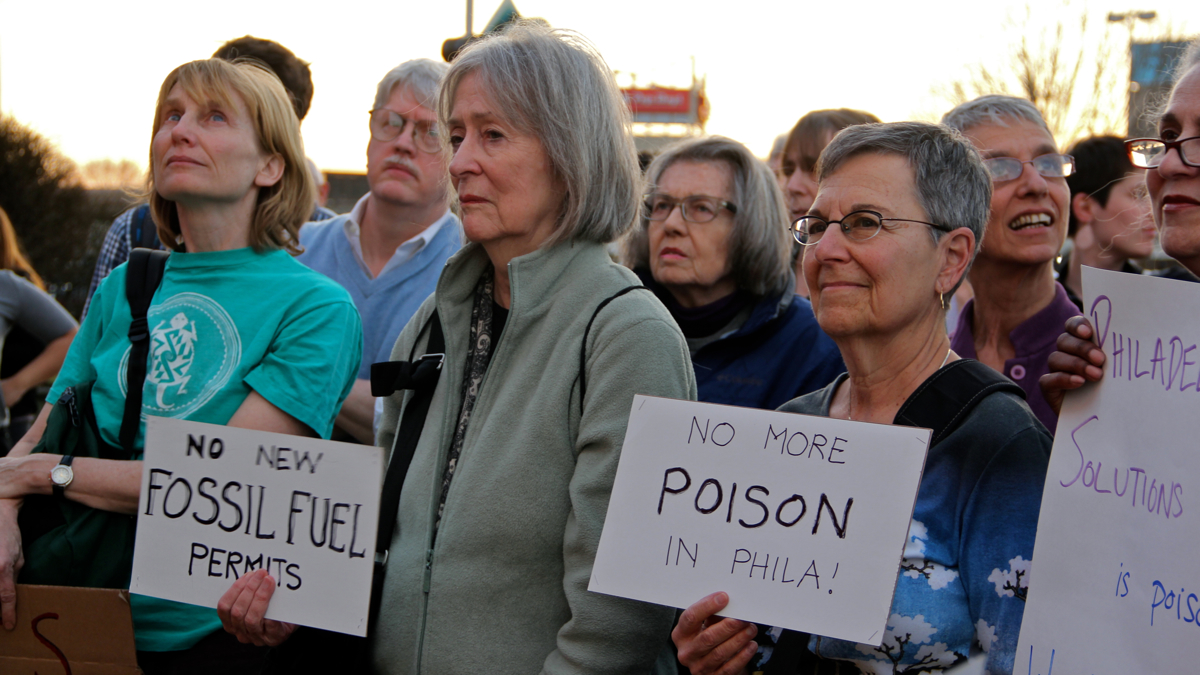 Photo: Emma Lee/WHYY (Fair use declared for purposes of comment and criticism).

This is fractivist journalism and, for one more example, check out this editorial from the Scranton Times-Tribune regarding the Dimock trial verdict. It’s absolutely incoherent and dishonest to boot. First, it says the verdict “challenges the industry’s assertion that deep drilling and hydraulic fracturing never have contaminated a water supply,” then it admitted “Cabot also showed there was no proven physical connection underground between its gas wells and the water wells.” This was followed by taking a cheap shot at the judge for not allowing in a last minute garbage of unorganized “evidence” and precluding “property damage evidence.” Well, no, he didn’t preclude the the evidence; he simply observed there wasn’t any. Such are the interpretive techniques of fractivist journalism.

This nonsense is then followed by more (emphasis added):

For those reasons, Cabot probably will have a reasonable chance to overturn the verdict on appeal.

Over the decade that drillers have been exploiting the Marcellus Shale, Pennsylvania’s legal and regulatory framework has been inadequate to the task of protecting the environment and the public. The Department of Environmental Protection has been in a perpetual state of playing catch-up, hampered by a rapidly expanding industry and a political environment favoring the industry’s development over protecting the natural environment.

Regardless of whether appellate judges uphold the verdict as being based on evidence, or whether the verdict proves to be an instance of jury nullification, the sobering message is that many Pennsylvanians justifiably have little faith that their interests are protected from those of powerful interests. It’s a landmark that should inform lawmakers about future development of the gas fields.

The editorial board obviously knows the truth – that there was no evidence supporting the verdict – but it says that’s just fine. It’s all about sending a message. It’s all about sticking it to the man regardless of the law or the evidence. What kind of lesson is this? That we should have more injustice, more O.J. Simpson type jury nullifications, more Dimock type verdicts? The Scranton Times-Tribune just articulated its vision of a barbarian state where the rule of law is meaningless and the only thing that matters is who it is that has the sword in his hands.

The board knows that, of course, and tries to deflect from who that might be by suggesting it’s Cabot, which just lost the case. It knows, and as much as acknowledges, the rule of law demanded otherwise. The real powerful interests are those who encouraged or helped pay for this and similar lawsuits in hopes of imposing their vision and pursuing their own interests. Prominent among the first group are the owners of the Times-Tribune, who own a water testing company that benefits from this verdict and as much controversy as can possibly be generated over non-existent water contamination.

Yes, this is fractivist journalism and it is ugly beyond imagination. No wonder newspapers are in free-fall and only 6% of us rate the media as very trustworthy.