The Lynett family, owner of Scranton Times-Tribune newspaper and the affiliated Northeast Driller, has been simultaneously trashing the natural gas industry and profiting from it.  Now it has allied itself with an anti-gas group in what may be an attempt to steer business toward another business venture – an environmental services company.

The Scranton Times-Tribune launched another attack on the natural gas industry in last Sunday’s edition with the outrageous  top of the fold front page headline of “Drilling Killing Water.”  It included key facts a savvy reader would recognize as the tip-off there wasn’t much there, but, overall, the message can be summed up as “Gee, this industry could use some help documenting pre-existing water conditions and dealing with all these issues, couldn’t it?”  Perhaps not so coincidentally, the Lynett family, which owns both the Scranton Times-Tribune and the expanding Northeast Driller, a special newspaper catering to the industry, also owns Elk Lake Capital, LLC, which just purchased a company called Environmental Services Laboratories Inc. that provides those services.

No doubt, Environmental Services Laboratories provides excellent services, but was the article and/or the headline in the Times-Tribune an attempt to drive business to another family enterprise?  We can’t know the motivation, of course, but it clearly trashed the industry in superficial ways using the FracTracker Alliance as a vehicle to gather, map and store the data used in the piece.  This group maintains a facade of objectivity belied by its own headlines, activities and funders, the last of which include the relentlessly anti-gas Park Foundation and Heinz Endowments.  So, what we have is a major newspaper in the Marcellus Shale region, with a stake in the industry’s success, allying with committed opponents of the industry to gin up issues to be solved and the owners of that newspaper just happen to have a solution.  Sounds like a bit of a conflict, doesn’t it?

Let’s examine the article itself as a starting point.  It’s major premise is that there were, over the five year period from 2008 through the Fall of 2012, some 161 instances of natural gas development impacting Pennsylvania water supplies, an average of slightly less than three incidents per month, although it is later acknowledged approximately 20% were temporary in nature and 77% of all complaints were unfounded.  It’s also noted the majority of verified incidents related to shallow methane migration, which can occur with any type of activity, including water well drilling, and none had anything to do with hydraulic fracturing.  Moreover, the story quotes the Pennsylvania DEP spokesperson noting the number of incidents has declined significantly with experience.

Nonetheless, the tone of the piece, not to mention the demagogic headline, is distinctly negative.  There is this sentence, for instance:

But the determination letters released by the state reveal a widespread suspicion among water supply owners – farmers and summer residents, school board members and mini-mart operators, churches and a Wyoming County municipal water authority – that when their water seems soured, gas drilling operations might be to blame.

Suspicion is not tantamount to guilt, though you’d hardly know it from this piece.  It reads like some politician alleging it’s the “seriousness of the charge,” rather than the facts, that convicts his opponent of heinous activities.  This is bolstered by several negative quotes from, of all people, Tony the Tiger Ingraffea, last seen palling around with Yoko Ono, Sean Lennon and Mark Ruffalo at some trendy Artists Against Fracking event in Manhattan.  The paper uses Ingraffea, unsurprisingly, to offer “that when DEP says it cannot find a connection between water well contamination and nearby gas activity it does not mean there is no link,” implying there was a link and effectively demanding the industry prove its innocence.

It seems a bit strange for the Times-Tribune would reach out to a committed NIMBY opponent of natural gas from Ithaca, New York, for comment when they are plenty of geologists and hydrogeologists right here in Pennsylvania to pick from, not to mention Terry Engelder of Penn State, who is one of the foremost authorities on the subject of the Marcellus Shale.  The article also incorrectly identifies him as having worked for the industry, when the reality is that he merely supervised a Cornell University study financed by the industry that took approximately 2% of his time while he was doing exactly what he does now.

Perhaps it has something to do with the fact Ingraffee’s pet projects, Physicians Scientists & Engineers for Healthy Energy (a group dedicated to opposing natural gas development in New York) and his greatly flawed studies of natural emissions, have been funded by the same organization, the Park Foundation, that also funds the Times-Tribune’s collaborator on this latest story – the FracTracker Alliance.  Also funded by the William Penn Foundation and the other major supporter of all things anti-gas, the Heinz Endowments, the Alliance is sponsored by the Community Foundation for the Alleghenies.

One look at the Alliance website, its rotating headlines and its project list indicate it is just another specual interest group focused on fighting natural gas development.  The project list even includes a helpful page offering this:

Run off your right-of-way by an industry employee or truck? Concerned about the quality of the water you’re putting in your canteen? Riled about the forced relocation of your favorite trail? If unconventional oil and gas drilling and its associated activities have put a rut in your trail adventure, we want to know! It is time to collect the stories and experiences of hikers and trail users everywhere to better understand the impacts of the oil and gas industry and outfit trail advocates to address these issues and seek remedies.

The Alliance also provides mapping of the unserious “List of the Harmed” where things such as “constant fear of developing cancer” are listed as incidents, giving further evidence of its clearly anti-gas mission.  Yet, these are the folks with whom the Times-Tribune has partnered to after the same natural gas industry it covers in a much more positive venue called the Northeast Driller.  Both are part of Times-Shamrock Communications mini-empire, which owns numerous newspapers and radio stations throughout Northeastern Pennsylvania and other nearby regions and is led by CEO Bobby Lynett.

How can this be?  Well, one doubts the author of the recent piece, Laura Legere, needed any encouragement, given her eagerness to cover stories casting doubt on natural gas over the last several years.  Still, Laura doesn’t pay her own salary or write headlines and certainly wouldn’t have written that one.  Her employer, Bobby Lynett, though, also happens to be the Managing Director of a Lynett family investment group called Elk Lake Capital LLC.  Named for the Wayne County water body where the Lynett family has summer homes, Elk Lake Capital is a venture capital company whose investment criteria include energy companies, non-union enterprises (imagine that from the newspaper of one of Pennsylvania’s union towns) and this:

This confirms the Times-Tribune owners have absorbed what the rest of already knew: that natural gas industry is safe and the Lynetts have proven it by putting some of their money with a company called Environmental Services Laboratories that serves “natural gas drilling companies,” among others.  They also invested in a sister company called Environmental Land Surveying & Solutions that says it “work[s] primarily for the natural gas industry and its vast network of connecting industries.”  Among the services offered by the former are “pre-drill water surveys,” “ground water sampling” and several other industry oriented activities.  The latter offers more of the same.  No doubt the firms are highly competent and good industry fits for those companies using them, but that’s not the question is it?

Still more is offered by Part 2 of the article where the the Scranton Times-Tribune virtually uses a bullhorn to promote the use of services that just happen to be offered by the Lynetts’ newest enterprise. Headlined as “Scientists Find New Tools for Tracing Fracking Impacts,” seemingly answering Ton Ingraffea’s question from the first piece; “How did you look?”  The piece then continues with a wholesale promotion of the value of water testing, includes these excerpts (emphasis added):

“Whether you are Matt Damon or the president of Halliburton, for different reasons you should be interested in this,” Dr. Barron said in a lounge off his laboratory on the Houston, Texas campus early this year. “If you’re worried about the environment, then for once you might be able to find out if they’ve really done it and who did it. If you’re Halliburton, maybe this is a way of saying, ‘You’re right, someone contaminated your water. But it wasn’t us. It was that guy.'”

“It’s hard to tease out the contamination signal from the natural variability,” Syracuse University hydrologist Laura Lautz said. “It’s even harder to do that when you don’t have the baseline water quality data.”

“Good monitoring systems actually identify it at that point,” then track any changes, he said. “The way to do monitoring is to be able to identify it in the early stages before it becomes dangerous.”

“The important thing shouldn’t be the blame game,” he said. “It should be finding out the source and making sure it doesn’t happen again.”

Such services, of course, are welcomed by the industry, which uses them regularly.  They are, obviously, also the antidote to false claims of contamination put forth by those ideological driven groups, trial lawyers and wannabe wealthy plaintiffs who attack natural gas for everything from sagging eyelids to scaring folks to death.  The value of the services isn’t up for debate.  What is in question is whether the need for them is being promoted by creating issues, using the power of the pen to set off alarm bells that can only be silenced by hiring the pen owner’s testing firm to prove innocence.

As if to answer the question, a few days later an editorial in the Times-Tribune piled on, saying this:

The DEP’s inability to locate its own documents occurred during a period when many property owners and environmental activists had questioned the completeness and accuracy of DEP testing relative to water quality.

The same issue also included this incredibly inaccurate and demagogic cartoon promoting the falsehood that hydro-fracking has contaminated drinking water supplies, something that has never happened in decades of doing it and over a million wells later: 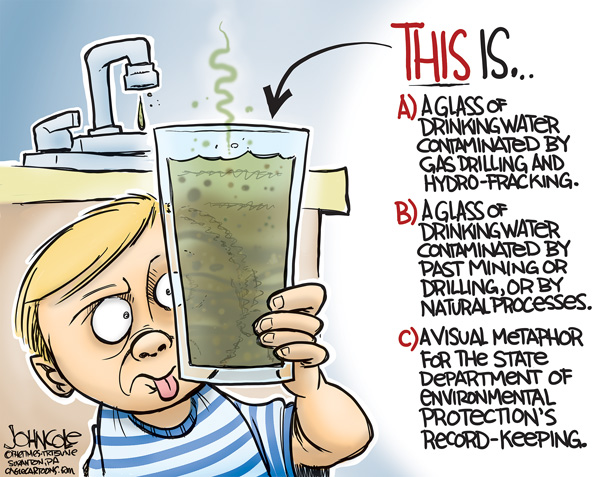 Frankly, I question whether the Times-Tribune‘s inks and tree-killing to produce four pound Sunday newspapers aren’t much greater threats to our environment than gas drilling or hydraulic fracturing.  More importantly, however, are the “Driling Killing Water” headline, this cartoon and the misleading information simply an attempt to steer more business to one of the other holdings of Times-Shamrock’s owners?  Frankly, we don’t know for sure but, paraphrasing their own words, let’s just say it reveals a widespread suspicion among farmers, landowners, industry representatives and others – that when their future seems soured, Time-Shamrock’s own business philosophy might be to blame.