The gentry class Heinz Endowments funds many stupid stunts but none more so than this anti-pipeline joke orchestrated by professional protester Alex Lotorto.

Alex Lotorto is a professional protester who has been playing student at multiple colleges for well over a decade now. He’s developed a low-level career for himself chasing causes to get his face in the news. Fractivist and anti-pipeline causes have been a particularly rich environment for him to do so. His latest stunt is one of the most pathetic I’ve witnessed but it was spectacularly successful in one regard, at least, in that he got the attention of one of my favorite blogs, Instapundit, which linked to a PowerShift story of the event such it was and called out Lotorto’s group as “Putin’s Stooges.”

When I followed the link provided by Instapundit, I thought it was going to be about some naive students; young useful “mush for brains” idiots. The title, after all, was simply “Pennsylvania Students Arrive at Governor s Doorstep to Demand No New Pipelines.” What I immediately discovered, though, was Alex Lotorto’s smiling 30-something face in the middle of a photo of 15 supposed students representing 19 colleges (not sure how that works). 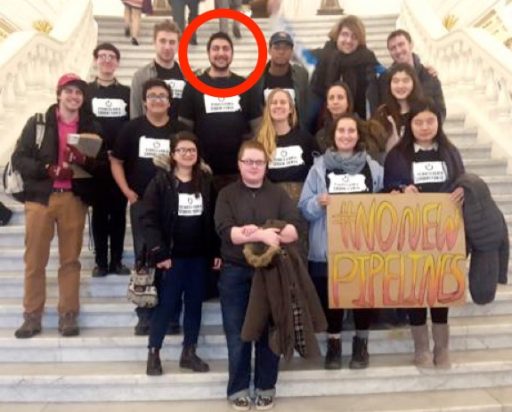 There’s also a cringe-worthy video in which some poor student who is, no doubt as sincere as could be, is enticed to read what is an equally cringe-worthy anecdotal statement to the governor’s receptionist or something.

The video had but 10 views before I visited so, presumably, this post is its best hope for notoriety and, make no mistake, notoriety is the life’s aim of these malcontents. What especially caught my attention, in addition, to recognizing Alex Lotorto, was the acknowledgement the stunt was sponsored by “Energy Justice Network with a grant by the Heinz Foundation.” Heinz, of course, is as gentry class as it gets in Pennsylvania and funds everything fractivist in the Commonwealth, including not only the phony Clean Air Council, “Damascus Citizens” and myriad other radical groups, but also StateImpactPA, the fake news source of record for all fractivists.

The Energy Justice Network and Alex Lotorto have been the subject of much research by me and they’re both as fake as could be. Here’s what I wrote about Alex when he surfaced in Jessup a while back:

We have chronicled Alex’s exploits many times here and at Energy In Depth. He’s currently associated with the Energy Justice Network, which is financed by the Earth Island Institute, another of those Rockefeller causes intended to serve as the point of the spear in the family’s efforts to “strategically parkify” much of rural America and Canada. The Rockefeller Brothers Fund, in fact, has given Earth Island Institute some $670,000 over the last several years to sponsor “its Energy Action project which organizes and mobilizes 18-35 year olds around reducing greenhouse gas emissions.”

Lotorto, in other words, is the ultimate “useful idiot,” exploited to the max by the 1% he thinks he’s opposing. He’s their agent in suppressing projects that benefit the poor and middle classes so as to advance his sponsors’ own special interests. He sides with these PovertyKeepers in putting hiking trails and scenic views ahead of the interests of locals in economic development and inexpensive clean energy, all the while pretending to speak for the latter. It’s his schtick.

He’s apparently performed that schtick since he was old enough to carry a placard, running from protest to protest, chaining himself to this and that, threatening to hang himself and various other theatrical exhibitions. Here is a taste of Alex Lotorto from a few years ago (just watch the first two minutes or so):

You can also read about his earlier role in leading an occupation of the New York University  food court here. He was then a student at Muhlenberg College. He also led protests at the University of Pittsburgh while attending Muhlenberg. He’s a “have mouth, will travel” serial protestor obsessed with acting out his dream role of being a 1930’s Wobbly organizer.

This is who Alex is and what this anti-pipeline stunt is all about, another opportunity for him  to get his face out there protesting something while pretending to be a student, just as he did at NYU eight years ago over student rights at a university he never attended. He’s not a student and the poor students led around by the nose by him are the products of gentry class manipulation of politics through funding by supposedly non-political tax-exempt entities. The Heinz Endowments will stoop to anything to get its way and this time they’ve reached a new low.