We’ve told the story of the fractivist outfit New York Public Interest Research Group (NY-PIRG) here before when I wrote a post entitled “Stuffing the PIRG and Making Rain” last year and that was later followed up by another more extensive expose on “Jay Halfon: The Fractivist Rasputin” who is the force behind NY-PIRG and the man connected to seemingly every fractivist cause, organization and funding source. Halfon is rainmaker in chief for New York trial lawyers and is connected to both the Rockefellers’ Sustainable Markets Foundation and the Park Foundation. He has served as Executive Director of both the NY-PIRG and the New York State Trial Lawyers Association and according to NY-PIRG’s latest 990 return (fiscal year 2012), continues to serve as its paid President.

There’s little need to repeat the other facts from my two earlier posts, but some interesting new information has come to light regarding the way in which NY-PIRG has scammed both students and journalists while promoting fractivism and stuffing the pigs among the state’s trial lawyer community who are always looking for new causes and plaintiffs. They’ve favored some forms of student speech and suppressed others while picking student pockets and entangling them in junk science fiascos. 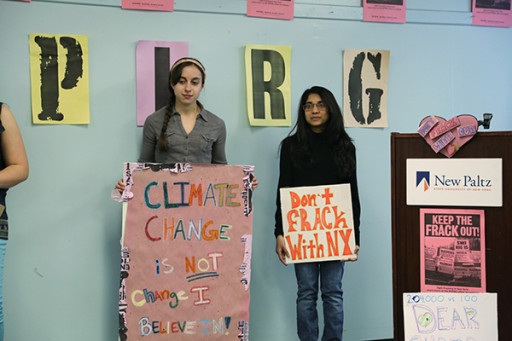 What student fees it NY-PIRG pay for: A NY-PIRG student group “sends Gov. Cuomo a Valentine”

NY-PIRG was created some 42 years ago at a time when similar groups were being created across the country at the instigation of Raph Nader and a radical named Donald Ross who later went on to head the Rockefeller Family Fund. NY-PIRG hires students to assist with its “research” and as paid activists. NY-PIRG and other PIRG groups are funded at the expense of taxpayers who, though public colleges and universities, collect donations from student bodies who are conned into approving them as part of tuition fees. These funds then get funneled back to PIRG groups where they’re spent with little or no accountability. It has been identified by many as a scam (also see here and here), for example, and one PIRG group apparently even supported Deep Green Resistance.

One of the above links includes something I hadn’t noticed before about NY-PIRG; it’s explanation for being organized as two separate corporations. Here’s what their current Executive Director and then Deputy Director, Rebecca Weber, had to offer in the way of explanation when Syracuse University students rightly asked where all the money had gone:

This discrepancy was explained by Rebecca Weber, deputy director of NYPIRG.

‘Like many non-profits we have set up two corporations, one for other citizens, non-students, to contribute to the organization,’ Weber said.

She added that the money donated by non-students is used for community work and not on campuses. However, many chapters also work in the community.

That’s no explanation at all, of course; rather, it’s mumbo jumbo intended to deflect criticism by uttering a half-truth that is unlikely to be checked by anyone, especially writers at the Daily Orange student newspaper who can’t even be expected to know where to look. I did check and found there were two corporations, but the distinction had nothing whatsoever to do with students and non-students. The two organizations are incorporated as the New York Public Research Group Fund, Inc. and the New York Public Research Group, Inc..

As I noted in my earlier post, “both are non-profit, but one is registered with the IRS as a 501(c)3 entity (a charity, in effect, that is not supposed to be doing any significant political activity or lobbying) and the other as a 501(c)4, which is specifically political in nature. They are, otherwise and for all practical purposes, the same organization with the same address and same Executive Director, but one can collect money in the form of tax-deductible charitable donations and the latter can do lobbying; two things that aren’t supposed to be mixed.”

Their is no real distance between the two entities and the NY-PIRG lobbying entity had a negative fund balance of $941,606 on August 31, 2014, some $957,526 being owed to the charitable entity with no indication it will ever be paid back. Even if technically legal, this is a clear skirting of lobbying restrictions by the charitable entity collecting all those tax-exempt donations. All they do is is permanently loan the money to their lobbying entity to avoid lobbying restrictions. Could there be any more flagrant violation of the tax-exempt rules as a matter of practicality? Transfer the tax-exempt donations to a lobbying entity with no hope of getting the money back and you’re good to go legally, it seems. This is not exactly the “good government” NY-PIRG wants reporters to think it’s all about.

Worse yet is the fact NY-PIRG was given a big $10 million gift by Attorney General Andrew Cuomo before he left office to become Governor of New York. Reading between the lines, it looks as if Cuomo bought them off with money to spend promoting their radical special interest agenda and raising still more money from students to do even more of the same.

All this pales by comparison to the manner in which NY-PIRG has actually targeted students to raise money, squelching their speech in the process, and conducted “research” with it. The fund-raising mechanism, briefly described above, started with a bit of collusion by college administrations and NY-PIRG to set up a student body vote on whether to add the latter as a college activity for which a few bucks would be added to each tuition bill for all students. These referendums are easily sold to young idealistic students who don’t know better and don’t care about the money because it’s paid by someone else (their parents or college lender). The appeal of being involved in the activism and the “research” is irresistible.

The problem with this approach, of course, is that the colleges where NY-PIRG is voted in have effectively favored one form of speech over another by majority vote and forced all students to participate. The test is whether the activity being funded is “viewpoint neutral.” As the US Supreme Court decided in a 1999 case involving the University of Wisconsin (emphasis added):

The First Amendment permits a public university to charge its students an activity fee used to fund a program to facilitate extracurricular student speech if the program is viewpoint neutral…When a university requires its students to pay fees to support the extracurricular speech of other students, all in the interest of open discussion, it may not prefer some viewpoints to others.

Here’s an example what NY-PIRG does with the money, according to its website: 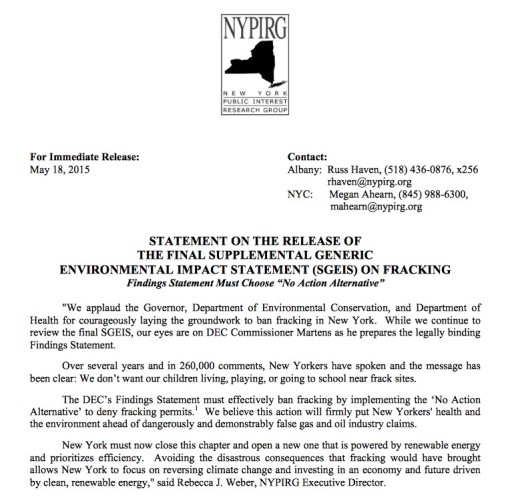 This is a statement put out by the “charity” arm of NY-PIRG. Is there anything here that could reasonably be construed as “viewpoint neutral” by any honest observer? No, of course not. NY-PIRG is an out-and-out advocacy group that advocates a very particular viewpoint. The fact this is supported by student fees collected under the umbrella of “neutrality” illustrates what a farce the whole operation is. It’s a fishnet umbrella that keeps out the sunshine and lets everything else through.

The farce, sadly, doesn’t end there, either. NY-PIRG’s research was, for the longest time, directed by Walter Hang, who later went on to infamy as the organizer of a fractivist campaign, being given well over $1 million of Park Foundation and Rockefeller money by Jay Halfon, who now runs the Sustainable Markets Foundation. Walter lives and works in natural gas heated space in Ithaca, from which he attacks fracking using bogus collections of irrelevant facts to make his case.

Walter Hang is an organizer, of course, and others try to pass him off as a “scientist,” often referring to him as “Dr. Hang,” as a biologist, as a “staff scientist” and many other things that imply special expertise. But, if Walter Hang has any special expertise, it’s nowhere to be found – there is no published resume, no curriculum vitae, no biography or anything else anywhere on his website or connected in any way with his NY-PIRG or subsequent work that I can find. (If there is a set of qualifications out there someplace, Walter, send it along and I’ll happily publish it here but, at this point, I’m really wondering what your expertise is.)

Hang was a well-known name before any of us heard of “fracking” and his style is the one that pervaded NY-PIRG while he was there and has continued to this day. Virtually every bit of research conducted by NY-PIRG has been of the same phony character as Walter Hang’s statistics. This New York Post Editorial from 1997 sums it up nicely: 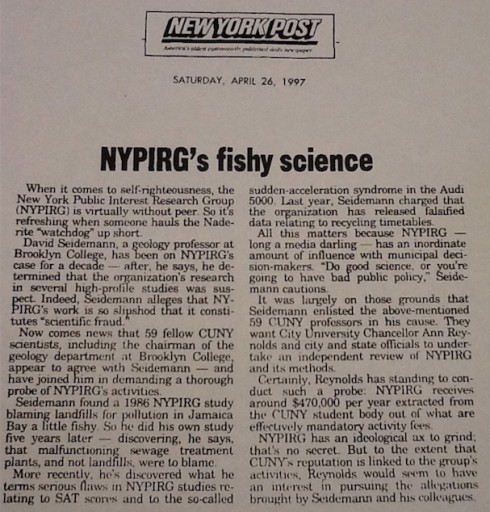 I’ve talked to Seidemann and his evidence his overwhelming. You can read more here, here and here. NY-PIRG is no research outfit – it’s just another arm of the ruling elite class and the trial lawyers who thrive on manipulating everyone. Jay Halfon, the Fractivist Rasputin, is at the heart of the whole thing, running a modern version of Tammany Hall. It’s the archetypal example of the corruption that produced the New York fracking decision. Are you paying attention, Preet Brahara?