The Energy Information Administration is out with some more stunning information about the power of shale jobs. It’s where the action is.

Readers of this bog know we frequently go to EIA for data because no one does it better in terms of collecting and objectively analyzing data on the energy system. As I’ve noted before, it is that remarkable anomaly: a government agency that actually knows its mission and works. We have another example from their November 5 Today In Energy column authored by Robert McManmon. Titled “Texas Leads Nation in Growth in Oil and Natural Gas Production Jobs During 2013,” it’s packed full of revealing data on the industry across several plays – data on shale jobs.

Here is the chart that got my attention; it is a statistical concerto not unlike a sheet of music for something akin to the William Tell Overture where the music is intended to invoke a Swiss Alps image in the mind of the listener. Putting it in American terms, it’s like the Lone Ranger riding to the rescue, which is no coincidence, given it’s the same music and shale jobs are, in fact, riding to the rescue of our economy and the rural areas where all that activity is taking place.

The data is from the US Department of Labor, Bureau of Labor Statistics, Quarterly Census of Employment and Wages and the jobs limited to those related directly to oil and gas extraction, support activities for oil and gas operations and drilling oil and gas wells. The numbers do not reflect all the ancillary and indirect jobs involved, which, as we now from Pennsylvania data, for example, represent the bulk of the economic activity. The EIA data doesn’t refer to shale jobs per se, but a quick look at the map included makes it explicitly clear that’s where they come from; six shale plays plus the Permian Basin, which has both shale and conventional oil and gas development. 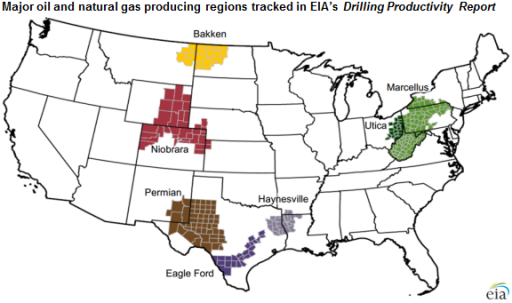 According to the EIA:

The EIA does note “much of the growth in oil and natural gas jobs can be traced to growing onshore production in several shale formations in the lower 48 states” pointing out the following:

The EIA’s Drilling Productivity Report provides more details but that musical chart says it all, doesn’t it? Shale jobs represent the masked man riding to the rescue of rural America, while helping all of America to become energy independent. The Lone Ranger rides again and William Tell is still out there performing miracles with his fine-tuned skills.

One thought on “Shale Jobs: Where the Action Is”