The bizarre nature of the fractivist movement often takes your breath away and our shale gas stories now include a proposed herbal solution for landowners.

It’s really quite remarkable how off-the-wall and over-the-top the fractivist movement is. Ever day brings new shale gas stories from that camp, some laughable and many more that make one realize what a fragile foundation our civilization is built upon, if people of this ilk are actually able to exercise influence. Here’s one more example; the herbal solution for landowners.

Our example comes from a reader who subscribes to one of the fractivist mailing lists from New York and was surprised to find this suggestion being circulated among a group of friends on the other side:

Here is my thought about a local situation, the pharmacy school in Johnson City, NY.

This is another give-away to large corporations and the local higher education system. I know I’m walking on thin ice here, because both are entrenched interests. But please bear with me.

The Southern Tier is a wealth of natural pharmaceuticals that were used years ago for health and well-being. In fact, many industry-inspired pharmaceuticals cause as many problems as they cure. In particular, when the local population is poisoned by industrialization inflicted upon them by corporations, further poisoning by use of industry drugs can be harmful.

The pharmacy school, once again, will enrich a few and create a product that is questionable as to efficacy.

And here is the paradigm shift…

What if we used the abundance of nature that is our blessing in NYS, the wild herbs from which are derived many substances that heal, but also may keep people healthy in the first place. What if our emphasis wasn’t about enrichment of several privileged and well-connected (I won’t say member of the old-boy system), but rather educates the entire population in the process of self-sufficient use of herbs and greenery, which is the wellspring of good health. What if NYS became the source of sustainable living, in the same spirit of the recycling…

This is my vision…

1. Create a school of use of herbal medications that focus on retaining good health instead of treating the pre-poisoned people.

2. Indeed, we could draw from the superior intelligence of a few experts, but their responsibility would be to encourage and promote natural health by use of our local environment. This could be expanded to so much more than simply herbs, in promotion of health for everyone, such as organic farming, exercise, use of environment for these purposes, parks for healthy child development—the possibilities are endless.

3. The landowners who say they are unable to pay their taxes and so must frack, could be brought into this by way of use of their land, with either payment by the government, or forgiveness of taxes for the landowner participating in the project. This is slower, as far as wealth creation for the landowner. But we all know the landowners who embrace fracking haven’t considered the reality of control of their property by multi-national corporations that may or may not live up to their contact, may destroy the land, may harm homeowners’ insurance, may make the land unusable for posterity, and makes communities outdoor factories.

The heart of this idea is self-reliance and harmony with the environment.

Yes, this the solution New York’s fractivists would offer Southern Tier landowners betrayed by Governor’s sellout on fracking; the herbal solution. Worried you won’t be able to pay the taxes on your land? Get some some really smart people to pick some weeds for you, spread the seed around, wait a few weeks for nature’s bounty to appear, harvest the stuff, package it in a plastic bottle (you’ll need to make a fossil fuel exception for that), run a few ads and the money will pour in to solve your problem. You think yogurt made an impact? Wait until you start growing Umbelliferae – it’s unbelievable! There are already books written on the subject dating back as far as 1848 and more to be written no doubt. 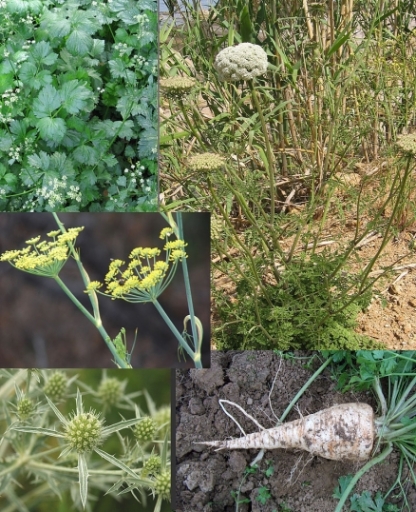 The beauty of the herbal solution is that, instead of growing petrol, Southern Tier farmers can grow Petroselinum. There’s no end to the demand for Parsely, right? It’s a bottomless pit of opportunity.

The author of the herbal solution is a fan of Naomi Klein’s new book This Changes Everything: Capitalism vs the Climate, which evidently inspired this bit of creative thinking. Klein’s book is, of course, an attack on capitalism and now a documentary financed by the Ford Foundation with, it appears, a little help from friends at The Message Productions, LLC, which is a Sustainable Markets Foundation grantee (the sham outfit Jay Halfon employs to fund the fractivists with money from the Park Foundation and Rockefeller family). Our herbal dreamers are tools of the very forces they suppose they’re attacking – the most useful of idiots.

These are the sorts of useful idiots Andrew Cuomo told everyone he “heard” a few weeks ago. Isn’t it wonderful? What a country! What a state! What beautiful shale gas stories!

3 thoughts on “Shale Gas Stories – The Herbal Solution for Landowners”