Victor Furman reviews a Facebook post by a DAPL protester and concludes it’s little more than a lesson in self-deceit by those too blind to see the truth.

Glenn Wahl is an instructor at Jamestown Community College in Western New York (Lucille Ball’s hometown). It’s part of the SUNY system. He’s also a former high school teacher and frequent commenter on the NaturalGasNOW Facebook page. I didn’t realize just how much of a fractivist he was, however, until I visited his Facebook page to find he’s a DAPL protester. He wrote a post detailing his trip to North Dakota to be a part of it and it’s a doozy.

Glenn Wahl’s post provides a good look into the way a DAPL protestor thinks (or doesn’t think). The best way for me to explain is to simply analyze what he wrote, which I’ve done on more or less a line by line basis with my thoughts in red:

I recently returned from Standing Rock- left a few days earlier than planned due to the Army Corps decision and also due to the fact that the car (belonging to Josh, a Marine from NH) had no snow tires and a storm was coming in.

Before Wahl could return, he had to first get there, of course. He almost certainly didn’t walk or sprout wings and fly. No, he used some form of transportation made possible by the oil he doesn’t want to see moved.

It was an incredible several days there though- very humbling seeing the thousands of people from all over the country (and world), of many ethnicities, ages and backgrounds, all working together to protect the water and each other. Some in camp were famous, such as Cornel West and Tulsi Gabbard, but most are just plain folks. It is a true community there-

Yes, a true imported community of paid protestors and organizers and their seemingly unemployed followers along with a few Dakota Indians, not thousands, looking to make leverage as much as they can off the top from the pipeline company.

I kept hearing the Simon & Garfunkel line “All come to look for America” in my head, and knowing that for the first time in my many years, I had found the real America- one filled with love, caring, responsibility and patriotism.

We all have voices in our heads and songs in our hearts but most of us are living in this decade! As far as patriotism, what is more patriotic then fueling American jobs, cars and homes with the fruits of America’s first real steps toward energy independence? Why send a billion dollars a day to countries that would destroy us?

Everyone finds their niche, whether it’s feeding the camp, cleaning, firewood processing (I split wood for a few hours each day- it was a good way to stay warm), building (helped build some prefab panels for the north camp), medicinal/herbal/first aid, etc.

A Hippie Utopia with all the earmark of the 1960s, I see – what we typically see from fractivists.

There are plenty of projects to work on. I helped insulate the water house with hay bales (brought all the way from Iowa by a farmer named Mike), and after those were off his flatbed, we moved several big logs to the other camp.

The people there are amazing. In less than a week, I talked to and/or worked with literally a few hundred people. (I might not get all the names matched correctly with their places) Morgan from San Francisco (she’s a thrash metal drummer); Justin and Jesse from Colorado who were bundles of energy and cheerfulness as they jumped from one construction task to another; Julia Carrie Wong from Oakland who is a reporter for the Guardian and who gave me a ride when I was hitchhiking; Meghan from Colorado- she didn’t have a warm enough sleeping bag , so when I left, I gave mine (made from petroleum products, no doubt) to her, since the storm was coming in the next day; Ambrose – I think he said he was Apache; Alex from Australia (he came all the way just for this!) (bet he came by jet plane, too); Steve from Oregon; Amy from Connecticut; Little Thunder; Sebastian, Marie from NYC; Scott from Montana; George (from the Standing Rock tribe- he had his hand injured badly from the police attacks several weeks ago); Amy, a Pawnee who makes delicious flatbread; Sylvia from West Virginia………. And many more. Some were here just for a few days, but many were long term- they were here for weeks and months (and supporting themselves how?). They showed constant caring of the people around them, and despite the harsh conditions, have managed to make a society far more civil than most places with electricity, running water and paved roads are.

More civil than most? – I don’t think so. Consider this report from the Washington Times:

Some of the protesters won’t leave, creating semi-permanent encampments near Cannon Ball, North Dakota, and triggering a feud with tribal members fed-up over problems with crime, poaching, panhandling, garbage and waste disposal, as well as the drain on Sioux resources.

The protesters have their own gripes. Rumors about the tribe hoarding donations are rife within the camps, as are complaints about council members attempting to “colonize” the encampments by establishing rules.

Both sides aired their concerns at a tribal council meeting livestreamed Thursday that offered a window into the efforts of the Sioux to grapple with a protest movement that has spiraled beyond the rural North Dakota tribe’s control.

“The word that comes to my mind all the time, it’s ‘imploding.’ We’re imploding,” said tribal chairman Dave Archambault II. “We’re fighting each other. That’s the best way, the easiest way to conquer anyone is to create division and fight among themselves.”

Then, there’s this report of a woman zip-tying her 82-year old mother to a wheelchair and more or less abandoning her during the events. These protestors have created open sewers, set trucks afire and strewn garbage everywhere, polluting their own temporary environment.

I also learned much more about the pipeline and the protest. I spent about three hours Saturday in training, learning more about nonviolent resistance, preparation for it, and first aid treatment for the results of physical violence and chemical weapons as well as the legal aspects of getting arrested.

Training is about indoctrinating others; teaching them to think not for themselves but, rather, to adopt an opinion. I once attended a training seminar in Afton, NY, where they protestors were taught to put their elderly in front to make it look like “the man” was beating up on the helpless, amongst other similar tactics.

But, because of the Army Corps decision, there weren’t actions to get involved with while we were there, and I’m not sure they would have allowed it anyway, since several told me that the front lines should be mainly indigenous. During the training, someone pointed up and said “Eagle.” There, above the two hundred or so of us was a bald eagle, circling low before flying on its way.

Wait… I thought he said there were thousands of protestors….. which was it Glenn?

But, make no mistake. Despite all the good will of the people there is the “black snake”- the oil pipeline from the Bakken fields that would take the oil south. It’s pretty much all completed, except for the section under the Missouri River…………which is why there are ten thousand protesters/protectors camped there.

Now, its ten thousand? The story keeps evolving, like the length of the fish that got away. It seems to be a common problem with the typical DAPL protestor and there’s always thousands of gullible true believers out there to spread the story. It’s like this Facebook post that got over 410,000 shares before it was exposed as a photo of the Woodstock concert from almost 50 years ago: 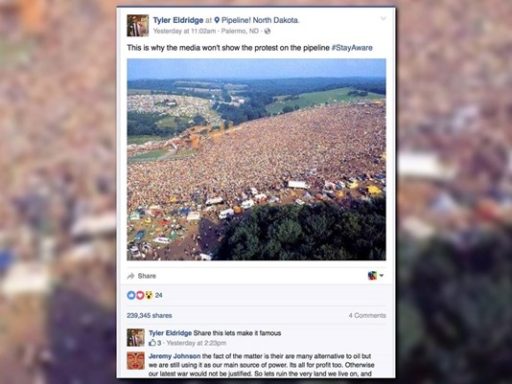 Looking just across the barricaded bridge, one can see the National Guardsmen, the Morton County sheriffs and other law enforcement. Except they are on the wrong side this time. In a situation straight out of Avatar, they are the mercenaries on Pandora, and the Native Americans are the Na’vi.

Notice how this DAPL protestor fantasizes as if his exploits were material for a Hollywood production.

But, unlike that tale, this one has violence only on one side.

Yes, violence by the protestors themselves.

The protectors are using the power of peaceful resistance to counter the violence of the other side. One of the best examples of this I heard about was that the Morton Sheriff had asked for support from the town. So, people at camp made care packages with food and notes of goodwill and delivered them to the sheriff’s office with the message that the protectors are protecting the waters for all the people, and that they harbor no ill will towards the officers who have beaten, maced and shot (with rubber bullets) them. Several officers have turned in their badges, unable to continue being on the wrong side of history.

The above sounds great and in fact was a terrific story “but” that’s all it was — a story. The police did receive a care package, not from the local protestors, but rather veterans who appreciated the work they were called upon to do.

So, I’m now back here in a warm (no doubt fossil fuel heated) cabin with a soft bed instead of in a cold tent, feeling blessed to have experienced Standing Rock and hoping I can go back sometime. But, hoping against hope that this time the corporation doesn’t win, and that the people who have been oppressed for centuries can, just this once, see their efforts pay off and their land be secured against the black snake.

The coyotes I heard howling during the last night I was there were telling me something. Maybe it was that the world is changing, and that even more people will rise up and build on the example of Standing Rock…………. I hope so…………..

So, there you go. This is the world of the DAPL protester. It’s confused, emotional, hypocritical and just plain wrong in so many ways.

Editor’s Note: Vic, as always, cuts to the heart of the matter — yet another Eastern DAPL protestor engaged in virtue signaling and acting out his heroic self-image. One more example is provided by this story of school students from Somerville, Massachusetts (near Harvard, Tufts and MIT) who plan to protest a local bank over the DAPL project. What’s interesting about the story (an illustration of Indoctrination U if there ever was one) is how quickly the reporting goes awry. Only three sentences into the story the reader is incorrectly told “The 1,172 mile-long pipeline was originally designed to go through the Standing Rock Sioux Tribe reservation” and only DAPL protestors have made the government look at an alternate route. That isn’t true at all, of course. The pipeline doesn’t go through reservation land at all. It deliberately skirts it. Once again, though, a group of coastal elites determined to engage in some virtue signaling are ready to not only believe, but also spread the fake news, just as Glenn Wahl does.