The Heinz Endowments is a deeply political organization when it comes to natural gas development and is responsible for much of Pennsylvania’s fractivism.

The Heinz Endowments is behind much of fractivism in Pennsylvania. It partners with the William Penn Foundation to create the issues, magnify them and report them, all with the goal of advancing the special interest fractivist agenda. Together, they straddle the Commonwealth geographically, one from being Pittsburgh and the other from Philadelphia, like two versions of Edward Scissorhands, clipping, stabbing and undercutting the natural gas industry at every opportunity using their multiple shears.

We’ve documented the relationships and the politics, disguised as charitable grant-making, every way we could, but the Loren Kiskadden case, which is every bit as bizarre as the movie, provided some new insights when one of the officers of the Heinz Endowments was questioned in a deposition related to the case. The obfuscation and evidence of how things really work piled up deeper than Scissorhands’ hedge clippings.

A good rule of thumb is to never sue anyone if you’ve got something to hide. This was proven again recently when a junkyard plaintiff by the name of Loren Kiskadden, together with some neighbors, and in league with lawyers entangled with a cartel of fractivist shills funded by the Heinz Endowments and the William Penn Foundation, sued Range Resources. I’ve covered that case extensively here and, previously, at Energy In Depth, but a deposition of Phillip R.S. Johnson, the Program Director for Science and Environment at the Heinz Endowments reveals much more about the behind the scenes role of that organization in Pennsylvania fractivism and how deeply it wants to keep it that way.

Johnson’s role with the Heinz Endowments, a private foundation with nearly $1.6 billion in unrestricted net assets run by Teresa Heinz and her brood of gentry class brats, is to recommend grants to them for funding from this wealth. Johnson was deposed because he played a role in a meeting with plaintiffs in the Loren Kiskadden, et al case (also discussed beginning at page 66 of his deposition transcript). This raises the question, of course, of exactly what role the private Heinz Endowments foundation, which is not supposed to be engaged in any political activity itself, was playing and wether it was indirectly financing the lawsuit or paying for the essentially political activities of the various attorneys involved. Accordingly, Johnson was asked this very simple questions:

So, Mr. Johnson, does the Heinz Endowments fund organizations that are opposed to fracking?

It was a simple enough question and, after 14 more pages of objections and laying foundations, his attorney, Shannon Poliziani, offered this:

I instruct him not to answer that question.

This led to further arguments among attorneys, of course, and, then, this exchange:

Q. Let me ask it a different way then. Mr. Johnson, in your capacity as senior program officer or as interim director, what is your role in deciding whether a grant is or is not approved?

A. What do you mean by what is my role?

Q. Well, the question I have for you, Mr. Johnson, again is in your capacity as either of those positions since 2009, as senior program officer or interim director, again recognizing the objections your counsel has made. I was asking for what your involvement was? How you personally in your individual capacity work on grant applications, having those grant applications reviewed by others at the Heinz Endowments and by the board, and how those decisions are made. I’m not asking you for how the board makes their decisions or how the Heinz Endowments make their decisions. I am asking for your role, your job responsibilities and what you do in the development of grant applications and whether or not those grant applications are approved or rejected.

Q. What do you use, Mr. Johnson, as guidance to make recommendations?

A. What do you mean by guidance?

A. It relates to our programmatic strategies which involve educating people about the environment, protecting the environment and health, and fostering sustainable communities. Then I guess the rest of it would be just judgment.

Q. So now let me after having obtained the information I need to better understand and ask the question, I appreciate that. That’s helpful. I will tell you I did my best to review the materials publicly available on the Heinz Endowments website to understand its programmatic elements generally, so as to not use up too much of your time today. With that said, I had asked you earlier whether or not the Heinz Endowments fund organizations opposed to fracking, and your counsel instructed you if you know. I agree, that’s appropriate. Does the Heinz Endowments fund organizations that are opposed to fracking?

The man who has carefully studied grant applications and the organizations making them to determine if they’re compatible with the Heinz Endowments programmatic strategies doesn’t know PennEnvironment, to which Heinz has given $295,000 since 2010 “to inform, organize and activate citizens to shape the debate around gas drilling in Pennsylvania” doesn’t know if it opposes fracking?

The man who supervises environmental grant-making for Heinz doesn’t know PennFuture, to which it has given over $10 million since 2002, most recently “to reduce impact of natural gas development on public health and environment, and to promote Pennsylvania’s shift to renewable energy” doesn’t know the organization claims to be “leading the fight” against “hydrofracking to release the gas from deep” in the Marcellus and Utica Shales?

The man who has arranged funding for the Clean Air Council ($709,000) and the Delaware Riverkeeper ($45,000) doesn’t know Maya van Rossum and Joseph Minott are among the leading fractivists in Pennsylvania, out there disrupting meetings, calling the natural gas industry “dirty and dangerous” and suing to stop it?

Heinz Endowments funded Maya van Rossum at work trying to halt fracking in New York; one of the grantees Phillip R.S. Johnson says he doesn’t know is opposed to fracking even though he gave her $45,000 last year.

To believe Phillip Johnson doesn’t know these things is to imagine the man is the dumbest executive to ever lead any grant-making program or to participate in the dissembling along with him. He didn’t want to answer the question and when he finally did, he pretended not to know what he was doing. It’s a stinging indictment of the Heinz Endowments, if there ever was one. Read the transcript and judge for yourself.

Then, after a long series of exchanges about it’s grant support of the Southwest Pennsylvania Environmental Health Project and the strange involvement of the Heinz Endowments in a meeting with the plaintiffs in the lawsuit against Range, which generated one “I don’t recall” after another from Johnson, there was this (starting on page 89):

Q. It refers to a major funders fracking conference in Pittsburgh. What is that referring to?

A. That is referring to foundations interested in fracking, the issue, and who wanted to visit a part of the country where fracking was occurring and learn about it.

Q. Was that a formal conference or a meeting of those organizations?

A. I’m not sure of the difference. It was a meeting of the organizations.

Q. Was it a meeting anyone could attend or only by invitation?

Q. And who is Erika Staaf? She is referenced in that email.

A. Erika Staaf at that time worked for PennEnvironment.

Q. And is the Southwest Pennsylvania Environmental Health Project an organization that participated in that major funders fracking conference?

A. I don’t remember.

Q. Do you remember any of the organizations individuals who attended that major funders fracking conference?

A. There were foundations that attended it, and there were experts or individuals who gave presentations.

Q. Do you recall any of the experts or individuals who gave presentations?

A. I recall John Stolz gave a presentation.

Q. On what topic?

A. I do not remember.

As this exchange reveals, Johnson moved from denying he knew whether the Heinz Endowments funded any fractivists to acknowledging Heinz involvement in a “major funders fracking conference.” There is much more and the transcript is well worth reading in total to see just how arrogant, dismissive and deceptive the Heinz Endowment representative really was. His impressive bio at Heinz says he serves as “co-chair on the Health & Environmental Funders Network steering committee” (a Gasland endorsing anti-fracking entity) but he’s not above playing Sergeant Schultz (“I know nothing”) when he needs to do so to protect his gentry class employer. 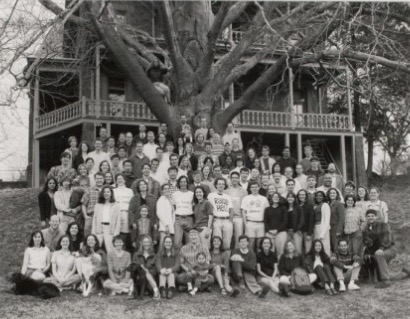 Yale University School of Forestry and Environmental Studies – Class of 1999. Phillip R.S. Johnson is the guy in the center of the second row wearing a “Raise Hell” tee-shirt. He’s standing next to Andre T. Heinz who apparently later gave him a job; the way it works in the gentry class.

More important, though, is the effective admission of coordinated strategy by this elitist special interest group to squelch fracking any way it can, while pretending to be nothing more than a charitable grant-maker. The Heinz Endowments, in fact, is one of two organizations largely controlling the fractivist narrative in Pennsylvania and it does so through a combination of grants and back stage manipulation of the actors (including StateImpactPA, which it also funds). This is how the Heinz Endowments does its fractivism.

One thought on “How the Heinz Endowments Does Its Fractivism”