Tom Wolf seems determined to be Governor Smithers to New York State’s Mr. Burns and it has extended to forcing Pennsylvania nursing homes into a man-made crisis.

Let me begin with an astounding fact; relatively small Susquehanna County, Pennsylvania has had 11 Wuhan Virus deaths and every single one of those 11 deaths has been in a nursing home, not among the general population. There is no reason whatsoever why Susquehanna County shouldn’t be opening up its economy and praise be to God it was never completely closed, thanks to natural gas development. But, why wasn’t it on the list for opening this week given its zero deaths outside nursing homes? It’s obviously because of those 11 deaths, but why did they happen? Well, part of the explanation may well be the abysmal “follow the leader” performance of Tom Wolf, our Governor Smithers. 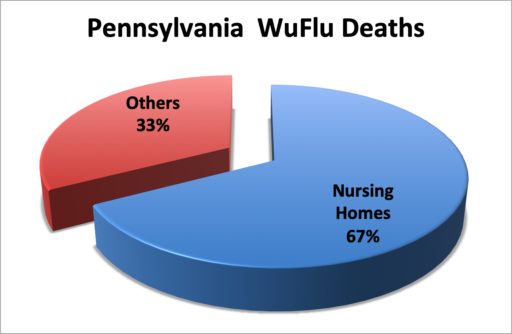 Smithers, of course, is that Simpsons character who is so slavishly dedicated to serving Homer’s boss, Mr. Burns. We see the same dynamic playing out in the Northeast with Tom Wolf acting out as Governor Smithers to New York’s Mr. Burns in the persona of Andrew Cuomo. Everywhere Cuomo leads, Governor Smithers follows. First, it was taxes and regulations. Then, it was a DRBC fracking ban like New York’s and designed to pander to New Yorkers. Next, it was joining the RGGI in which New York is central. Finally, it was linking hands with Cuomo on the Wuhan Virus response, Governor Smithers galloping in to support the supposed ‘leadership’ of Governor Mr. Burns.

That ‘leadership’ included perhaps the most stunning mistake made by any public official anywhere during the WuFlu crisis; the forcing of nursing homes in New York to take new residents with the virus in the name of avoiding discrimination, thereby guaranteeing of the nursing home death debacle we’ve seen in New York. But, once again, Governor Smithers followed Cuomo into the fiery dungeons of hell.  Read this and then grab your bucket of tar and a bag of feathers:

Coronavirus has spread like wildfire through many nursing homes across the Northeast, and state officials are scrambling to better protect those most vulnerable. Yet the death toll has been devastating.

The health directives put “frail and older adults who reside in nursing homes at risk” and would “result in more people going to the hospital and more deaths,” the American Health Care Association and affiliates said at the time.

A month later, it appears government officials should have heeded the dire call to pursue different pandemic emergency plans.

The deadly virus has spread like wildfire through many nursing homes across the Northeast, and state officials are scrambling to better protect those most vulnerable to COVID-19, the disease caused by the virus.

The death toll is devastating, according to interviews with nursing-home officials, patients’ families, health-care advocates, government officials and from an examination of state records by the USA Today Network Atlantic Group, a consortium of 37 Gannett-owned daily newspapers across the Northeast.

At least 3,043 people have died inside New York nursing homes due to COVID-19 complications, or about 17% of the state’s 18,015 deaths as of Wednesday.

In Pennsylvania, about 65% of coronavirus deaths were nursing-home residents, and in counties in the hardest hit southeastern part of the state, long-term care residents account for as much as 80% of county deaths…

“To have a mandate that nursing homes accept COVID-19 patients has put many people in grave danger,” said Richard Mollot, executive director of the Long Term Care Community Coalition in New York.

“We know facilities have a lot of infection-control problems, we know that facilities have low staff, so what do you think was going to happen when the staff were further strained in caring for these patients?”

“This may include stable patients who have had the COVID-19 virus,” according to a copy of the guidelines.

Continued admissions was ordered “to alleviate the increasing burden in the acute care settings,” according to the directive. But hospitals in most counties were never overwhelmed with coronavirus patients…

Pennsylvania Health Department spokesman Nate Wardle said the department is aware of the “significance” of COVID-19 in long-term care facilities and is working to assist them as individuals are discharged from hospitals.

Pennsylvania is among six states reporting long-term care infection data where deaths in long-term care facilities account for more than half of overall coronavirus deaths, according to the Kaiser Family Foundation, a national nonprofit that focuses on health care issues.

Yes, Governor Smithers precisely aped Governor Mr. Burns in condemning nursing homes to become WuFlu death central, while laying on the general population a tyranny over every aspect of our lives. It’s precisely the wrong approach; one of bureaucratic aggrandizement combined with envy and incompetence.

Consider, for example, the fact only 983 deaths have occurred in Pennsylvania outside nursing homes and more than half of those (535) have occurred in counties; Delaware, Montgomery and Philadelphia. Moreover, 13 counties account for 90% of all deaths outside nursing homes. Yet, we’re punishing all the residents of all 64 other counties with a lockdown intended to constrain the healthy while forcing the unhealthy suffer and die as a consequence of absolutely insane policies borrowed from a power-crazed neighbor. This is utter madness, and Tom Wolf, our Governor Smithers refuses to see it.