The WuFlu crisis has shown us Tom Wolf is utterly incompetent and worse. His initial response seemed measured, but then he went completely off the tracks.

When the WuFlu hit Pennsylvania, Tom Wolf appeared to be taking a measured approach that addressed the areas of the Commonwealth that had real problems. He focused on more urban counties in the eastern part of Pennsylvania and only gradually imposed restrictions as needed, county by county.

The next thing we knew he was shutting down everything and every county, regardless of the threat. He adapted to being a tyrant easily, telling small businesses selling clothes, flowers and electronics they were non-essential while telling Wal-Mart it was essential and allowing it to sell everything. He forced nursing homes to take WuFlu patients, resulting in one of the highest proportions of nursing home deaths among the states. He then cocked his head back and started lecturing counties about when it was safe for them to open. He started holding a “sword of Damocles” over their heads, after previously telling them it was only about “flattening the curve,” an excuse he didn’t invent but happily propagated. Now, he’s in full dictator mode, deciding who wins and who loses.

My county of Wayne, in the northeastern corner of the state is, so far one of the losers. It hasn’t made the WuFlu cut in Tom Wolf’s first two announcements, on May 1 and May 8, of released counties.  This was despite the fact it met the primary criteria—no more than 50 cases per 100,000 population over the last 14 days—on April 28, before both announcements. Wayne County achieved a 44.8 number on that day after being at a high of 118.8 cases over the previous 14 days on April 15. It’s all depicted in this chart which plots the rolling 14-day count per 100,000. The red is the 50 case threshold standard. 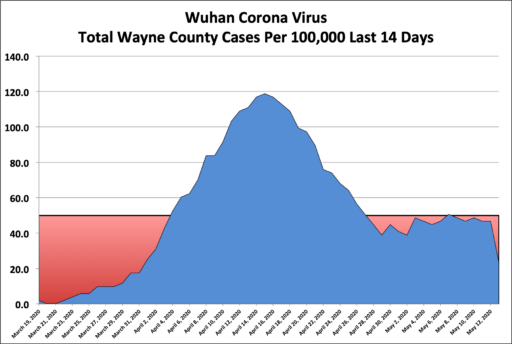 Our number yesterday was only 23.4 cases per 100,000, in fact. It was 46.7 on Tuesday but Tom Wolf’s DOH bean counter inexplicably dropped our total number of cases to date from 117 to 110, which tells us something about this administration’s competency. Regardless, Wayne County should be out but we’re not and that tells us even more; that this entire system is not even close to scientific, the exact opposite of what has been told in multitudinous lectures by the petty tyrants running Animal Farm. Some folks are just more equal than others.

The Pennsylvania WuFlu problem, which is one of mismanagement and pseudoscience rather than disease per se, isn’t confined to Wayne County, though. As I noted here, Susquehanna County (population: 40,328) has had 13 deaths, every single one of them being a nursing or personal care death, which means the county has had zero deaths among the general population. Moreover, it has had but 81 cases altogether over the last 60 days. Do the math; there is no way Susquehanna County doesn’t meet the criteria. It’s the same for Wyoming County (population: 26,794) with only 31 cases. And, why did those initial 24 counties ever get shutdown at all? Did any of them ever have numbers above the threshold?

Where there is a real problem, is in our nursing and personal care homes, although I’m pleased to say Wayne County has had no such deaths (another reason for our county to be freed from Tom Wolf’s tyranny). This chart tells it all from a statewide perspective: 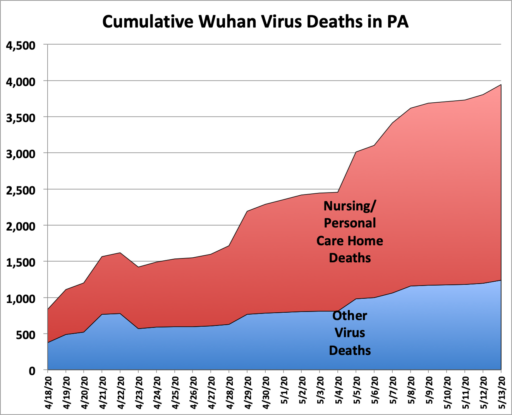 Notice how nursing home deaths, now 69% of the state total, have continued to grow at an accelerated pace while other deaths are leveling off. The difference couldn’t be more stark. As I noted here, this is probably connected to the fact Tom Wolf’s DOH, led by Dr. Levine, followed New York and ordered nursing homes to take WuFlu patients for which they were unprepared, which is why Levine and sister took their own mother out of a nursing home at the same time. How awful is that?

It gets even worse when one takes into consideration what Tom Wolf is attempting to accomplish during this WuFlu situation. He’s trying to force Pennsylvania into the Regional Greenhouse Gas Initiative, which has no value outside of burnishing Wolf’s green credentials and will unnecessarily raise electricity prices for Pennsylvanians and kill union jobs. He’s also obviously making moves to try yet again for a severance tax that will further burden the Commonwealth’s one major success story—its natural gas industry—while pushing off still more government costs onto consumers.

The WuFlu has opened a window into the world of Tom Wolf and it’s anything but pretty, as his now infamous press temper tantrum from the other day showed us.