The article follows in its entirety. 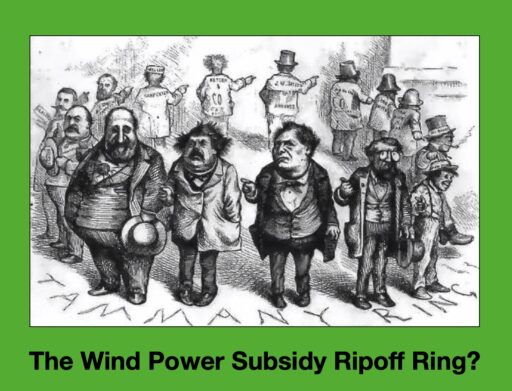 Six U.S. senators, citing the COVID-19 pandemic, have asked for “safe harbor” deadline extensions to assist renewable energy developers to meet construction deadlines and qualify for tax credits. Lisa Linowes, executive director and spokesperson for The WindAction Group, said that is a lot of hot air.

“Big wind does not have a COVID problem. It has a mismanagement problem,” Linowes told Texas Business Coalition. “Before the March 14 COVID shutdown, the industry was already reporting that 9,000 megawatts of 2016 safe-harbored turbines were expected to spill into 2021. This 9,000 megawatt spillover has nothing to do with COVID and everything to do with mismanaging delivery and construction timelines. Developers and (Iowa Sen. Charles) Grassley are shamelessly demanding taxpayers assume the price tag of their mismanagement. Such behavior should not be rewarded at our expense.”

The WindAction Group is, according to its website, “a national advocacy focused on the impact/benefits analysis and policy issues associated with industrial wind energy development.”

As the ongoing COVID-19 crisis continues to claim lives and cause economic disruption and uncertainty, it is vital that the government take whatever reasonable steps possible to allay unforeseen burdens on American families and businesses. In that spirit, we urge you to extend the continuity safe harbor, provided under existing Treasury Department guidance, for both the production tax credit (PTC) and energy investment tax credit (ITC), from four years to five years for projects that started construction in 2016 or 2017. This modest adjustment to the PTC and ITC guidance would help preserve tens of thousands of jobs and billions of dollars in investments and provide some certainty in these challenging times.

Linowes said those claims are specious.

This push by Grassley, Thune and others is an offensive act that should be renounced by the administration. Here’s what’s going on: When the phase-down was enacted, Congress said that projects had to ‘start construction’ by a date certain in order to secure the PTC. Under the law, facilities that began construction before Jan. 1, 2017, are eligible to receive 100 percent of the PTC.

Projects that start construction in 2017, 2018 and 2019 could receive 80 percent, 60 percent, and 40 percent of the wind PTC, respectively, after which the subsidy is eliminated. Since the credit is earned during the first 10 years of project life, costs accumulate to taxpayers well beyond the expiration date.

Linowes said developers seeking full-PTC benefits had from 2016 until the end of 2020, to reach commercial operation. If they miss the 2020 deadline, they can still earn the full PTC by demonstrating to the IRS a continuous progress towards meeting the deadline.

Grassley is promoting American Wind Energy Association’s bogus claim that COVID slowed the industry causing projects to delay into 2021. He is now asking the IRS to extend the four-year window by another year to allow MWs that started construction in 2016 to spill into 2021 and still earn 100% PTC.

Linowes said this is a “self-inflicted problem” that quickly spiraled out of control.

Big Wind developers are looking back at the stockpile of safe-harbored turbines they knew would likely miss the 2020 deadline and they’re now hoping all of these turbines will qualify for the 100% PTC. A one-year extension to the development window would fix things nicely. The public is being lied to about the issue. This is another massive cash grab by the wind industry. If you have any doubts see what the largest US wind developer reported this week.

The wind PTC together with the energy investment tax credit (ITC) used for solar energy, dwarf all other energy-related credits and will reach over $9 billion in 2021 alone and over $60 billion cumulatively through to 2029. Any further extensions will increase this cost to taxpayers.

This begs the question: Is wind energy affordable?

If by ‘affordable’ you mean competitive or cheaper than other sources of generation (gas, nuclear) I would say no, it is not affordable. For nearly a decade, the wind industry has touted that it was ready to move off the federal PTC and grow on its own without public assistance. The phase-down was intended to give the industry a gradual transition off subsidies and on to traditional sources of construction financing. But this did not happen.

Over the last five years since the phase-down was enacted, the industry spent its time trying to get as many projects permitted and built as possible. The focus was on metal in the ground. Today the PTC represents between 50-65% of wind project costs. There is very little chance the industry will ever be able to make up the 50+% loss should the PTC finally end.

However, there are exceptions, especially in some parts of the country where the wind resource is readily available and the cost of construction is low. Wind projects may be more competitive with fossil generation even without the PTC, but these areas are rare, Linowes said.

But it is important to keep in mind that the subsidies are paid OUTSIDE of the energy market. In other words, while the wind guys can sell their energy into the market at competitive energy prices and appear to be low cost, they are receiving a very large stream of revenue outside of that market that is allowing them to under-price their energy.

Limowes said while wind continues to struggle, there are affordable options. What is the best option at a time when millions of people are suddenly unemployed or dealing with reduced incomes?

I’d have to say natural gas. It is abundant and we are experiencing the longest period of low gas prices in our history.