The DRBC is being funded big-time again by the William Penn Foundation as the former blithely ignores conflicts of interests and the latter buys influence.

Kevin Mooney writes for a number of publications and published an eye-opening article in the Washington Examiner back in January that deserves some further attention. Kevin does excellent investigative work. He unearthed the fact the William Penn Foundation, that is to say the Haas family, which also happens to be a partner of the Rockefeller family in trying to lock up the headwaters of the Delaware, has resumed taking money from the former. It is a shameful corruption of government, with the DRBC blatantly selling out to the William Penn Foundation as it buys influence. 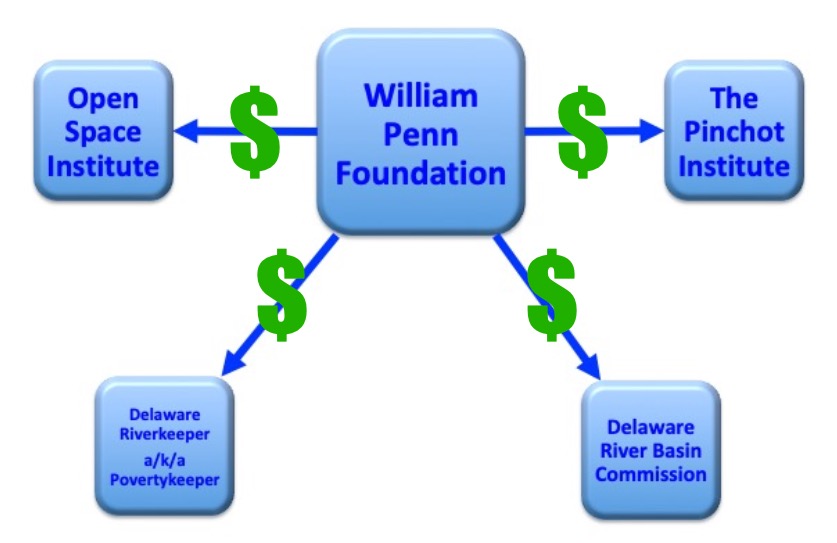 Back in 2013, I explained “The DRBC Funding Scandal” to readers who might have been naive about how government is corrupted:

Imagine for a moment there are three individuals named Jones, Miller and Smith. Jones has a two-acre lot in a low-density residential district in Small Town, USA, on which is located an older two-story 1,500 square feet home. He has a big empty rear yard that slopes uphill and faces south toward Miller. Miller’s home is a new three story 6,000 square feet McMansion situated on the crest of the hill and accessed from a private drive coming in from the other side. Smith is Miller’s attorney and he lives in the next town.

Jones hears about a new state tax credit program for installing renewable energy systems. He reads up on the subject and finds he can, with the generous tax credits, put in a two small windmills and save about 40% on his heating and electric bill. He goes to the town zoning officer and is told there are no specific standards in the zoning ordinance for wind energy systems, but that he should be able to secure a permit for the windmills as a customary accessory use. Jones takes the application home and the zoning officer mentions it to the town supervisor, who is a friend of Miller.

The supervisor, in turn, casually mentions it to Miller, who is chagrined at the thought of something occurring on the Jones lot that might interfere with his view.  He expresses his opposition to the supervisor and tells the man Jones shouldn’t be able to put his his windmill just anywhere.  He also tells Smith, his lawyer, to put the town on notice they intend to sue if it issues the permit, which he does.

The supervisor, not wishing to offend Miller, tells the zoning officer to hold off on issuing any permit as the town will first need to develop regulations for windmills. He learns this will cost more money than the town has in its budget so he goes to Miller and asks for a donation to help. Miller volunteers the services of his attorney, Smith, to help draft the regulations and $5,000 to help pay him. The town supervisor, grateful for the help, thanks Miller and convinces his town board to enact an extendable six-month moratorium on issuing any windmill permits until the attorney has crafted the regulations.

Are you saying “whoa” about now?  Unless you’re … the Delaware River Basin Commission (DRBC), which as taken huge amounts of money from a party in opposition to natural gas development to help develop a system of regulating it, you are screaming “scandal” and “conflict” at the top of your lungs.  The idea that a government agency would accept money or volunteer professional services from an entity to assist in crafting the standards for something that entity bitterly opposes and is funding opposition toward, is highly offensive.  It “shocks the conscience” to quote a legal standard.  Yet, that is exactly what’s happening…

The William Penn Foundation, on June 13 of this year [2013], granted the the Delaware Riverkeeper Network a whopping $580,000 “For education, advocacy, and outreach to push policies that will protect the Delaware River’s water quality.”  We know what those policies are; they are adamantly opposed to any natural gas development anywhere in the Delaware River basin.  The Riverkeeper has been as prominent as one can be in opposing such development anytime, anywhere, anyhow in the Delaware River Basin, working with other wealthy extremely wealthy funders (e.g. the Geraldine R. Dodge Foundation, which is a Rockefeller family “charity” headed by Open Space Institute leader Christopher Elliman) to fight it every way they can…

[The William Penn Foundation] will have given the Delaware Riverkeeper nearly $1.1 million during a critical period when the DRBC has been sitting and continues to sit on regulations so desperately needed by upper basin businesses, landowners and residents.  The last mega-grant given to the Riverkeeper yielded $269,600 per year for Maya to hurl invectives at her upstream neighbors (almost 21% of her budget) and sue the DRBC…

All the while, this same William Penn Foundation, has, according to Foundation 990 returns and DRBC records, been giving money to the Delaware River Basin Commission “toward building Its capacity to assess, manage and mitigate impacts to water resources due to land changes related to natural gas development activities.”  It gave $82,500 in 2011, is scheduled to give it $399,300 in 2014 and who knows how much before and in-between.  The William Penn Foundation, it turns out, is a two-timing sugar-daddy to both the Riverkeeper and the DRBC.  While the economy of the upper basin dwindles and landowners are suffering foreclosures waiting for action on natural gas drilling regulations, the DRBC leadership sees nothing wrong with just sitting there, holding hands with the Riverkeeper’s paramour.

All this was the doing of Carol Collier, the then Executive Director of the DRBC who was later rewarded by the William Penn Foundation with a golden parachute to a cushy post-DRBC job at the Academy of Natural Sciences, which wouldn’t exist but for the Foundation’s money, the same as The Pinchot Institute, which Collier chaired and her DRBC lawyer Kenneth Warren also served on the board.

I had hopes things might get better under Steve Tambini, who seemed to lack the ideological agenda of Collier. Indeed, he assured me, upon taking the job, that the DRBC was pretty done with the William PennFoundation funding at that point. Sadly, though, Tambini seems to have had a change of heart or absolutely no influence with his Commission members because, in 2019, the DRBC again threw fundamental ethics regarding appearance of conflicts to the wind. Here’s how Kevin describes it (emphasis added):

Taxpayers, property owners, and business owners living and working in the Delaware River Basin, which includes Pennsylvania, should take a good, hard look at who their government commissioners recruit to serve as advisers.

That’s because the government commission Kennedy helped establish in 1961 to monitor water quality on behalf of the public interest has morphed into a tool for well-heeled special interests working to advance anti-energy policies.

This much is made clear by the money trail that flows out of a private, grant-making institution into the coffers of environmental activists who populate the commission’s advisory committees. As it happens, the commission receives donations from that same private source, which is working to steer regulatory policy throughout the region…

Note above that part of that $649,000 earlier granted by the Foundation was the $590,000 for DRBC “for education, advocacy, and outreach to push policies that will protect the Delaware River’s water quality.” Now, it’s happening again as the William Penn Foundation simultaneously funds the two entities, one of whom is constantly attacking the other for show as the DRBC gives the Riverkeeper a wink and a nod by leaving the latter on most of its committee and allying with it to fight back against the Wayne Land and Mineral Group lawsuit: 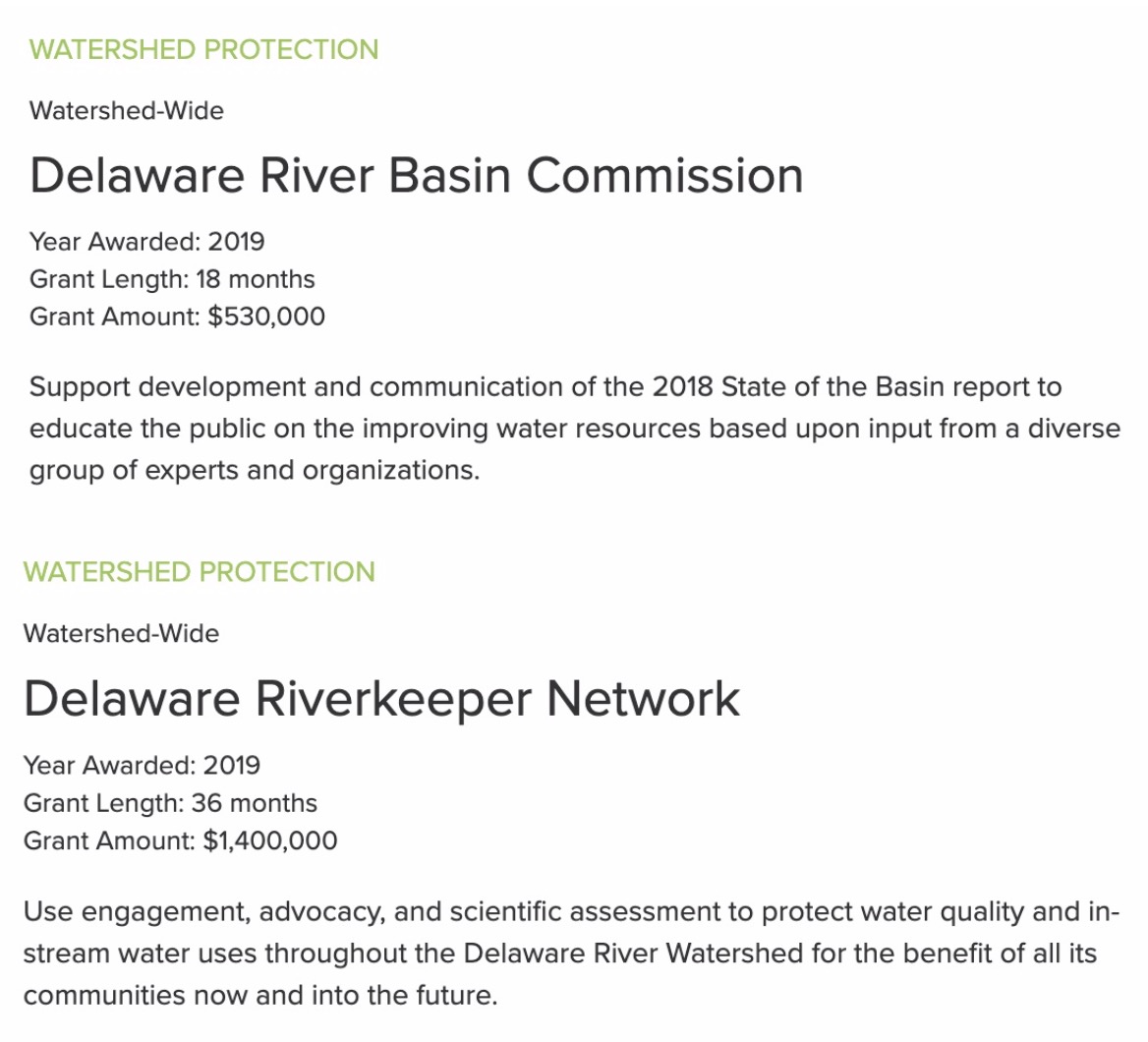 Two of the William Penn Foundation’s recent grants to its shills, one of which happens to be the Delaware River Basin Commission.

It’s very curious, isn’t it, that the purposes of the latest grant, made for something called “our Shared Waters,” is “education,” the same as the last one? The only difference is that this time “outreach to push policies that will protect the Delaware River’s water quality” is now described, in classic Newspeak, as “improving water resources based upon input from a diverse group of experts and organizations.” By diverse, of course, it means exclusive of anyone with a different opinion or having economic development or property rights interests at heart.

It would be easy to excuse the DRBC seeking to educate the public on water quality improvements. They report  “a focused snapshot of 31 indicators for watersheds and landscapes, water quantity, water quality, and living resources, and includes a rating and a directional trend for each” with “a majority of the indicators receiv[ing] a “Good” or “Very Good” rating. And, they also report this in a DRBC presentation: 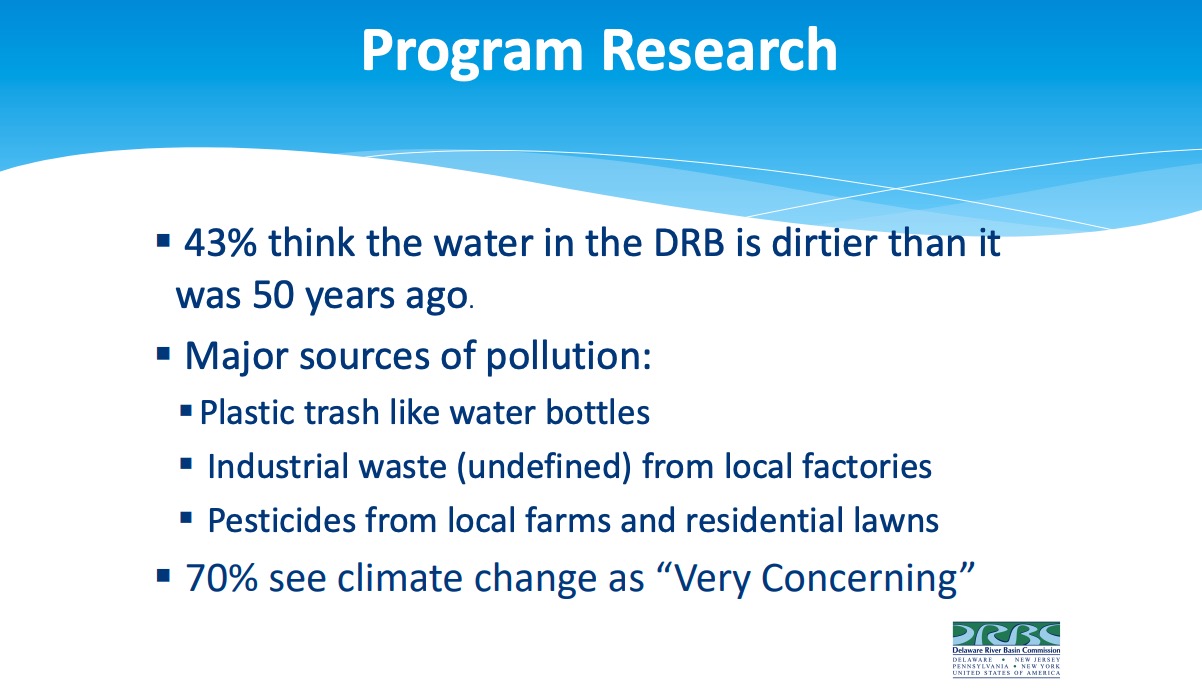 If the purpose of “Our Shared Waters” were to show the 43% who “think the DRB is dirtier than it was 50 years ago,” they’re wrong, that would be noble. The DRBC clearly has the data to do so. But, search the rest of the presentation or anything else on the DRBC’s “State of the Basin 2019” page  or its “Our Shared Waters” page, and you’ll find no such statement. Instead, you’ll find this (emphasis added):

Our Shared Waters: A Look at the Delaware River Basin is a DRBC-managed public outreach effort of multiple Delaware River Basin stakeholder groups to educate the public and decisionmakers about the current state of the basin and the opportunities available to play a role in its continued sustainability now and for future generations.

As DRBC was putting the finishing touches on its State of the Basin Report, we realized that, in addition to sharing the commission’s view of the state of the basin, we also wanted to create a comprehensive look of the basin’s waters by including inputs from a wide range of stakeholders to include: public and private water purveyors, NGOs, non-profits and residents.

This effort, in other words is all about community organizing. Moreover, businesses, landowners and economic development interests need not apply. The 43% who imagine things are worse than ever are to be encouraged in their false beliefs so as to accomplish more in the way of stopping growth, grabbing land and taking mineral rights.

But, there’s something else, too. Money is fungible and the when the William slips half a million to the DRBC to fancy up its report and make community organizing presentations. that money goes into the DRBC budget to help pay for staff and overhead drained by fighting the Wayne Land and Mineral Group in court. It’s a nice convenient way for the William Penn Foundation to pay back the DRBC for doing its dirty work. THBottom line: nothing has changed over the last seven years as far as the DRBC modus operandi. It is corrupt as ever, taking money from the wealthy folks who manipulate it every way.