The Constitution Pipeline should have been approved long ago by New York State DEC. The fact it hasn’t happened illustrates the depth of state corruption.

The Constitution Pipeline saga represents everything that is wrong with New York and why it’s properly called the Empire State, because it’s run like one. It also speaks to the naiveté an industry that thinks playing by the rules, combined with some patience, will yield anything but frustration in such a politically corrupt environment. The Constitution Pipeline should have been approved by New York State DEC a year ago and the fact it has not been is an indictment of the empire and its crime boss emperor for engaging in nothing less than tyranny.

The history of the Constitution Pipeline application is generally laid out here. It requires permits from both the Federal Energy Regulatory Commission (FERC) as well as the New York State Department of Environmental Conservation (DEC). The application to FERC was, more or less, finalized in July, 2013 and approved on December 2, 2014. On August 22, 2013 also made application to DEC for various wetlands crossing and other permits, including a Section 401 Water Quality Certification. Wetlands permits are, as any landowner or planning board member knows, issued routinely by DEC as they are by similar agencies across the country. The rules are slightly more complicated in New York but permits are, nevertheless, constantly being issued without big complications or controversy. They’re certainly no basis for denying a pipeline – only delaying it. 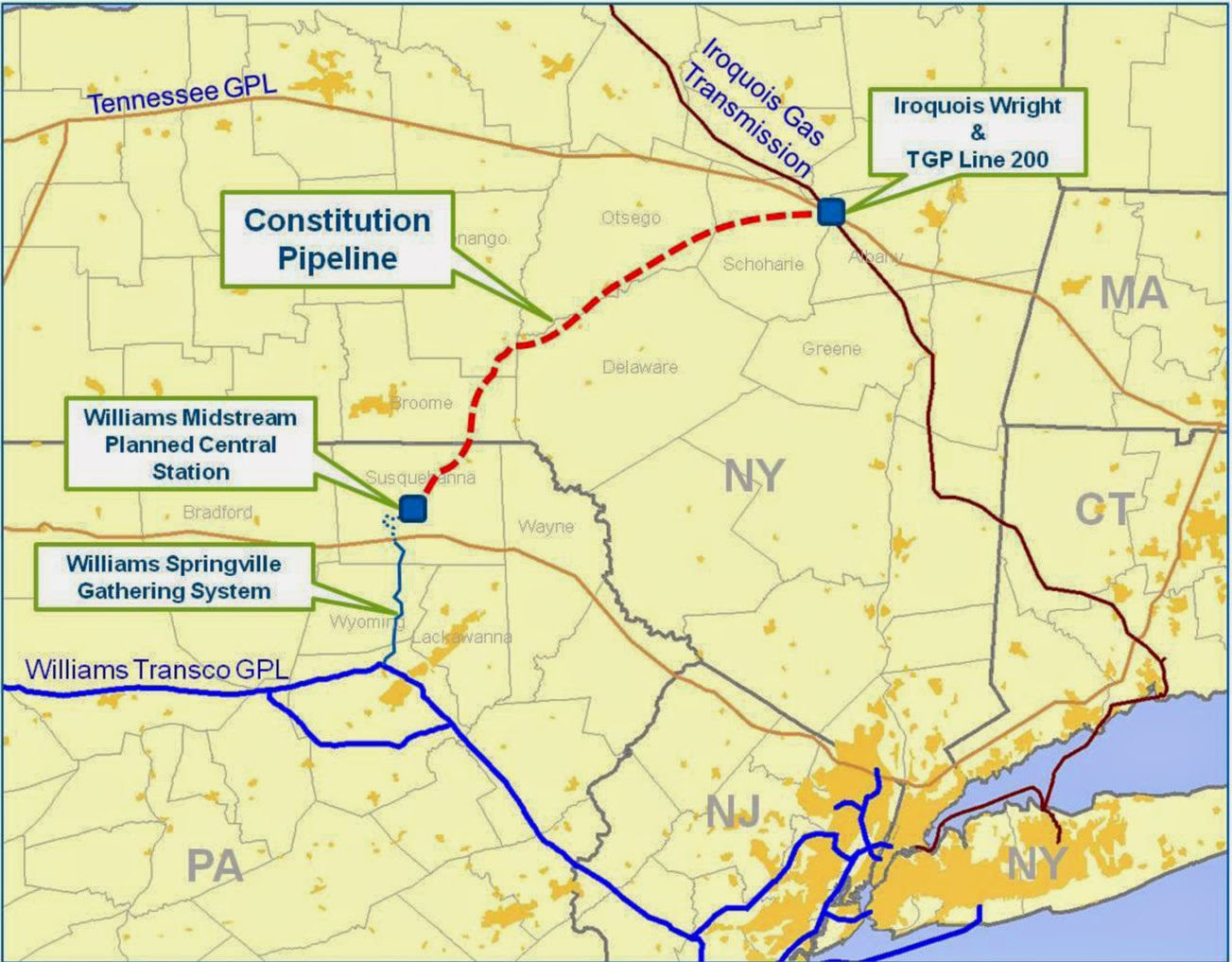 The Section 401 Water Quality Certification is a permit that’s not so well known but is not new either. Moreover, it’s not specifically aimed at pipelines or oil and gas activity. Rather, it is designed to simply ensure whatever activity is permitted by a Federal agency also complies with state regulations on water quality. There’s nothing special about it; it’s basically an intergovernmental coordination mechanism. Because wetlands permits are required from DEC, Section 401 also comes into play with a FERC project as a way for New York State to confirm a pipeline developer has obtained those permits and any others that might be required pertaining to water quality. It also allows the state to take a look at any stream discharges involved (stormwater in this case) and confirm these meet its standards. It is largely an administrative function.

This is why Section 401 includes the following language (emphasis added):

The Constitution Pipeline request for certification has now been before the DEC a total of 28 months. That’s 2.8 times the maximum period provided under Federal law for those of you from Manhattan who live oblivious to the real world. This explains the comment of a DEC official a few months ago when he offered this:

“If we are to use that authority arbitrarily or to withhold these certifications where we should be granting them, what then can happen … is there is an opportunity for the federal government to just take that process over from us and then we no longer have that authority,” Snyder said at a roundtable discussion on climate change Monday sponsored by the state Assembly. “So that’s the position we’re in. We look at it really carefully. We have people going out in the field, every stream crossing, every wetland to make sure these are being done using the best techniques to protect our resources. But we have limited authority over that broader energy question of whether the pipeline is needed.”

If you’re thinking like me, you’re now wondering why in the name of God hasn’t Williams, the builder of the proposed pipeline, simply gone to FERC or to Federal Court to assert its rights to a waiver, given the total irresponsibility of DEC in this matter, something even the agency has largely acknowledged. Why is Williams allowing a corrupt crime boss governor to dictate delay when there’s an obvious out?

The answer is simple if you’ve every attended the meetings of a local planning board where statutory deadlines on taking action are routinely extended with the cooperation of applicants hoping to get approvals. Requests for additional time to review applications are often justified with complex matters and, even where they’re not justified, most applicants choose prudence in hoping some additional time will allow the board to do its work and ultimately result in approval. It happened frequently as applications are revised during the review process and the parties both want additional time. There’s also a huge risk in denying a planning board requested additional time in that the board may then simply declare it doesn’t have a complete application and, therefore cannot act, or simply deny the approval for some frivolous reason. Developers want approvals, so they’re generous with time.

There comes a point, though, with some boards where an applicant realizes it’s being played and the game is one of delay in hopes of killing the project. That is the point at which legal counsel asserts the applicant’s right to due process and a decision is forced at the threat of lawsuit. It doesn’t happen all that often, but it does happen and it’s a necessary part of the process if fairness and the rule of law is to have any value whatsoever. I’ve represented both developers and planning boards over many years and, while I’ve often been the one asking for additional time, I’ve also advised clients to assert their rights when the delay game has ensued. Some developers, though, especially those with deep pockets, are reluctant to insist on timely performance of duties, preferring to wait it out simply because they can and feel that, if it’s to be a war of attrition, they stand poised to win in the end.

That strategy doesn’t work in a corrupt place such as New York, where the governor has been amassing dictatorial powers for some time now, as well as feathering his own nest with political donations and using the taxpayers as a crony-capitalist piggy bank. Williams has acted in good faith till now, but it’s time to take a different tack. The company even went to the point of refiling its application with DEC on April 29, 2015 to give the agency for time to review it, saying this (emphasis added):

At the request of NYS DEC, Constitution Pipeline has withdrawn and resubmitted its 401 WQC application with no changes or modifications to allow the agency sufficient time to complete its review of potential impacts on wetlands and water quality. This is an administrative procedural action which we do not expect to delay the timing of the agency’s final determination.”

We remain optimistic that we will receive final clearances so that we can begin construction of this critical piece of pipeline infrastructure in the next few months in order to help meet growing natural gas demand in New York and New England by the second half of 2016. Once complete, the pipeline will immediately become a key piece of natural gas pipeline infrastructure in the Northeast, creating an important connection between consumers and reliable supplies of lower-cost energy.”

This was at the point DEC had already had the application for a full 20 months; some eight months longer than permitted under Federal law. Williams gave the agency (Cuomo really) a new lease on life to torment it; yet another potential year of delay in the hope its good faith would be returned in kind. That it wasn’t is hardly a surprise to anyone familiar with Cuomo politics. He only wanted more time for controversy to be fomented in hopes of pleasing his “occupy” constituency and the NRDC gang manipulating them, as well as generating some kind of pay-off, political or otherwise, for his own personal benefit. And, make no mistake about it; this decision isn’t being delayed by DEC (which took 16 months to even schedule hearings on the permit) but, rather, by the micro-managing control freak crime boss in the governor’s office.

Williams hoped for a decision quickly after playing along and has been bitterly disappointed. Worse, it’s trapped by its own capitulation to the additional time request (a twisted form of blackmail), which now gives Cuomo until the end of April to decide under Federal rules. This will wipe out the construction season and result in another full year of day to the detriment of both Upstate New Yorkers and Pennsylvanians unless Williams finally gets tough and goes back to FERC and/or Federal Court to expose this chicanery as nothing but a delay game and demand its rights. It’s way, way, way past time it did so. If nothing else, the landowners who have supported the pipeline deserve it. Stop playing Cuomo’s game.

19 thoughts on “Why Isn’t the Constitution Pipeline Approved by Now?”