What in the world is wrong with Vermont, a state mired in political correctness, demagoguery and foolishness to the exclusion of any semblance of reason?

Vermonters just get wackier and wackier. The state long ago ceased to be part of New England in any meaningful way, having transitioned into the socialist puppet state of what is now Comrade deBlasio’s New York. First, there was Howard Dean (raised in the Hamptons) and now there is Bernie Sanders (raised in Brooklyn) – what more does anyone from middle America who isn’t a devotee of Marx need to know? Well, perhaps they should look at the bizarre energy policies of this condescending, but ultimately stupid, state. 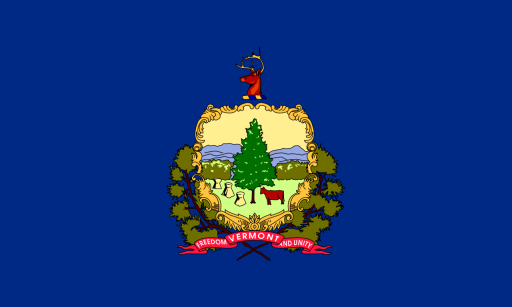 The Rutland Herald carried a story Monday that explains exactly why I’m so harsh on the Vermont of today, once the home of poet Robert Frost who long ago wrote these words:

Forgive me my nonsense as I also forgive the nonsense of those who think they talk sense.

Let me make the same plea, as nothing I see coming out of Vermont on the subject of energy makes any sense, although those in charge suppose they utter nothing else. Consider this from the Rutland Herald story:

When Vermont became the first state to ban hydraulic fracturing for natural gas in 2012, Gov. Peter Shumlin said the ban was “in keeping with our environmental ethic and our protection of our natural resources.”
But the state is likely on the verge of a big increase in the use of fracked gas from Canada.
The aging Vermont Yankee nuclear plant closed in December after much pressuring by Shumlin and others. But the state is still getting significant nuclear power from the Seabrook station in New Hampshire. Its largest utility, Green Mountain Power, gets 9 percent of its mix from Seabrook, company spokeswoman Kristin Carlson said.
Environmentalists were elated when the fishery-damaging Newport 11 dam was removed from northern Vermont’s Clyde River; and they have pushed for more dam removals. But Vermont takes about a third of its power from the huge dams on the rivers of northern Quebec.
All of it raises a question: Is greener-than-thou Vermont just exporting its energy problems?
“We need to take responsibility for where that power comes from and we need to make sure we are meeting our environmental goals in that energy use,” Sandra Levine, senior attorney with the Conservation Law Foundation, said in an interview. “And that we’re not just protecting our own very small backyard.”

No one living in the real world and not the make-believe one of rabid environmentalists is under any illusions. Vermont is clearly exporting its energy problems and that’s what it’s all about. Fractivism for the aristocratic set is just NIMBYism in one of its mutant forms. But, that’s hardly all that’s wrong here.

It started with Peter Shumlin, a demagogue on par with Alcibiades, Shumlin, as Governor of the green mountain state, decided in 2012 it might be a good idea to score some cheap political points with his politically correct New York emigrant constituency by banning fracking, even though there was no shale gas to be fracked in Vermont. He did so with flourish and the sort of snobby condescension one might expect in those circumstances, as if banning something that wasn’t going to happen was a magnificent moral achievement. He might as well have banned orange groves, but the ideologically blinded voters of Vermont who, after all, elected the self-described socialist Bernie Sanders as their US Senator, lapped it up as Shumlin carried on (emphasis added):

“As we pursue fracking with irrational exuberance injection chemicals into the groundwater of America, it seems we may have taken leave of our senses at times. There is going to be, very soon, in my kids’ and in the Twin Field students’ lives, a shortage of clean water on this planet. Drinking water will be more valuable than oil and natural gas. One can survive – human beings have survived for thousands and thousands of years without oil and without natural gas. We have never known humanity or life on this planet to survive without clean water. In the Green Mountain State we have a long tradition of protecting our natural resources and leaving this planet and this state hopefully better than the way we found it. You can look at the planet two ways. That we inherit it, and can do what we wish with it; or, that it is our responsibility to borrow it from our kids and our grandkids. In Vermont, we take the latter approach. We recognize that we’re borrowing Vermont from our kids and our grandkids. This bill will ensure that we do not inject chemicals into groundwater in a desperate pursuit for energy. It’s a big moment. I hope other states will follow us. The science on fracking is uncertain at best. Let the other states be the guinea pigs. Let the Green Mountain State preserve its clean water, its lakes, its rivers, and its quality of life. This is a job creator. This is a job creator. If we have the clean water, the clean lakes, the clean rivers, the Green Mountains that are preserved, we will win both economically and environmentally. And that’s what this bill is about.”

Shumlin’s pompous statement, delivered on May 16, 2012, may be viewed here. Note the fake seriousness as he pontificates on the ability to live without natural gas, as if he were posturing for some sort of NPR program where such affectation is mandatory:

Energy In Depth completely demolished Shumlin’s statement a few days later in a post originally entitled “Is Vermont Green with Envy,” pointing out the state had, only a year earlier, developed a Comprehensive Energy Plan that, among other things, said (emphasis added):

Wednesday, crowds braved the rain at the Catamount Industrial Park in Milton where NG Advantage broke ground on a new natural gas compressor station. The energy startup plans to tap into the abutting Vermont Gas pipeline, and then truck it to companies looking for an energy alternative.

“From here we’ll be able to load our trailers with compressed natural gas and deliver it to customers who are not on the natural gas pipeline,” Lunderville said…

The move is getting bipartisan support– Gov. Peter Shumlin and former Gov. Jim Douglas were both on hand making the case that natural gas was key to keep Vermont’s economy moving forward.

Call him “shuffling Shumlin,” but he’s hardly the only one living in a green dreamland in Vermont. The state wants no nuclear plants, no hydroelectric dams and no fracking, but it wants lot of natural gas. Here’s a chart, developed from Energy Information Administration data, illustrating Vermont’s natural gas consumption in January of each year going back to 2001: 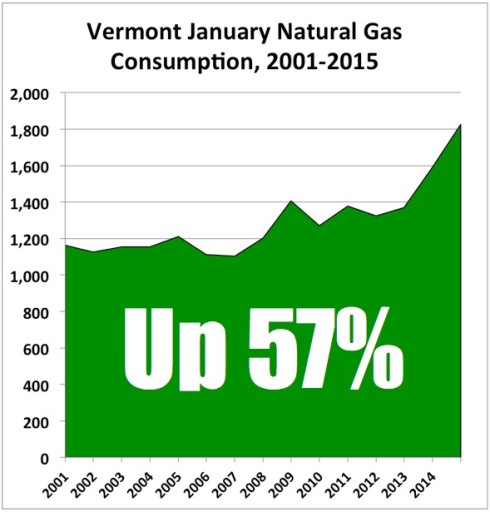 Notice anything? Yes, Vermont natural gas in January, 2015, was 57% higher than it was in 2001 (as against a roughly 3% population gain) and was 38% higher than it was when Shumlin swore off fracking, off-shore drilling and all that other stuff Vermonters don’t and can’t do anyway.

Getting back to the Rutland Herald article, there are some other things worth pondering in our quest to see what’s wrong with Vermont. Read it carefully and you’ll notice  a lot of vague talk about energy efficiency, “small renewable plants” and being “on a path to improve.” That’s government and activist speak for “someday, maybe, once we figure it out.” They’ve got nothing in other words, so they turned to fracked gas produced somewhere else so the Green Mountain state doesn’t lose its charm. “Let those Pennsylvania peasants do it for us” is what they’re saying. We’re happy to do it, of course, but it would be too much for these bloviating Vermonters to acknowledge it and stop with moral posturing?

Finally, there’s a big lesson for voters foolish enough to think shuffling Shumlin made a good move – appeasement of ideologues and radicals never, ever works. Just look at the remarks of Sandra Levine, the senior attorney from the Conservation Law Foundation, who says she’s not satisfied and now wants to make sure “we’re not just protecting our own very small backyard.”

Shumlin, like so many politicians of his ilk in both parties, thought the best way to address Vermont’s energy demands was to throw a fake bone to the fractivists, while talking up natural gas infrastructure to bring in fracked gas from elsewhere. He wanted it both ways and in 2016 he’s out of there, so he succeeded, but the people of Vermont now have to deal with the reality of what he wrought. His successor will have the additional burden of now confronting the enabled Ms. Levine and her kind who said “right on” when he was preaching fractivism and now want the state to actually live up to its word.

Such is the nature of politics in urban states where large blocks of voters uninformed in subjects such as energy production can be easily swayed by demagogues, but Vermont? This is the state that first produced Calvin Coolidge, one of the most sensible people to ever hold public office anywhere (though he moved to Massachusetts). No longer, though. What’s wrong with Vermont, anyway? Is it all those New Yorkers?