The New York Green New Deal is a proposal without a plan; rhetoric wrapped in political promises that have no substance because there is no nothing there.

My biggest problem with Governor Andrew M. Cuomo’s Green New Deal proposal to achieve 70 percent renewable energy by 2030 and transition the state to a carbon-free power grid by 2040 is the lack of a feasibility study that shows just what will be necessary to achieve those goals. Once that is available then and only then will citizens of New York get an idea what he has signed us up for financially.

Instead of that analysis, he announces integration and implementation projects. On May 30, 2019 Cuomo announced that $5 million is available for projects that will help New York integrate renewable energy resources in ways that will “improve the resiliency of the electric grid”. This program complements the $30 million announced last month by Governor Cuomo to “support the development and improvement of technologies, including automation and transmission renewable energy resources”.

The mission statement of the New York State Energy Research and Development Authority (NYSERDA) is to “Advance innovative energy solutions in ways that improve New York’s economy and environment”. NYSERDA was created as a public benefit corporation in 1975. In 1996 the New York State Public Service Commission approved the ratepayer-supported System Benefits Charge (SBC) Program and designated NYSERDA as the program’s administrator.

The SBC is collected by investor-owned utilities from gas and electric customers in the State, and funds the majority of NYSERDA’s programs. The Public Service Commission also established in 1998 the scope of NYSERDA was expanded as New York State moved to a competitive electric utility industry.

When the electric utility industry was regulated with vertically integrated utilities New York State required a research set-aside for public benefit research and development, energy services, and environmental programs. The State provided oversight for that research and development, industry developed a world-class research program and there was a spirit of cooperation between industry and regulatory agencies but more importantly there was a check to balance against political interference.

That has all changed now and NYSERDA, like every state agency in the Andrew M Cuomo micro-management era, is now a pawn to further his political agenda and that agenda now is “New York is leading by example in the fight against climate change, and modernizing our electric grid is a critical component of our path to clean energy and carbon neutrality”. Ultimately the problem is that the professional staff at the agency no longer makes decisions about future programs. Instead, it is all about the political calculus of appearance for the political agenda.

However noble that agenda is the fact of the matter is that his vision for a modern electric grid has never been implemented on the scale he proposes. I don’t think it is asking too much for an analysis that shows how many clean energy resources will be required to achieve that vision. In particular I advocate that NYSERDA should do an analysis of renewable energy resources in New York State that compares observed load requirements with the solar and wind resources potentially available.

The Minnesota Solar Potential Analysis Report would be a great template to follow. A recent blog post at the Conversation summarizes the analysis that determined the “least costly combination of grid-connected solar, wind and storage necessary to provide round-the-clock, year-round energy services”.

This is exactly the kind of research that I believe is necessary in New York. We need to know what will be needed and, because this is all new, I believe we need to consider alternative approaches. For example, the key finding in this analysis was that overbuilding solar photovoltaic power and proactive curtailment was the least cost alternative, in no small part because energy storage is so expensive.

I agree that the concept that simply assuming that the renewable resource output should match the observed power needed won’t work. However, the amount of overbuilding, the resulting curtailment and the impact on the energy market certainly should be a topic for debate because of competing interests in the market. Until New York State provides some kind of plan that debate cannot even begin.

The Minnesota Solar Potential Analysis Report concluded that Minnesota could achieve its goal of 10% solar by 2025 at costs comparable to the cost of natural gas generation and that the expected cost declines of solar, wind, and storage will enable Minnesota to achieve 70% solar and wind by 2050 with generation costs comparable to natural gas generation costs. With respect to New York the key point is that these goals are less ambitious than New York’s and as the control efficiency increases the control cost per unit of reduction increases exponentially. Consequently the same sort of analysis has to be done with the New York goals to determine whether we can afford to go as far as proposed.

While I agree with the general approach of this research I do have some reservations. The report acknowledges the issue of grid integration costs but it is not clear to me that they are included relative to the cost comparison with natural gas. While the report claims to eliminate the issue of intermittency I think there might be more involved. It is not just covering the unavailability of wind or sun there also is an impact to the grid when wind and solar vary dramatically in short periods. I think that problem can be handled but the question is whether the analysis included that cost too.

One other technical issue I would like to see addressed if this kind of analysis was done in New York is the source of the solar irradiance data. The Minnesota study used 10km grid cell satellite data. I would prefer to use actual on-site data observed from the New York State Mesonet because the on-site data has more temporal resolution and I think that is an important factor to consider.

I would like to summarize where I think we are in New York State by paraphrasing language from the Behind the Executive Summary and Reality vs Dreams post (from the highly recommended Science of Doom Renewable Energy posts):

We’re choosing between as yet undefined but surely expensive options trying to understand which one (or what mix) will be the least expensive. Unfortunately, we don’t know but we need to start now because we’ve been told by Governor Cuomo that we have to make reductions by 2030. If we make a good pick then we’ll spend the least amount of a lot of money and will be left with the fewest negative outcomes, but if we get it wrong we will be left with many more negative outcomes and even higher costs for a long time. Clearly the first step and priority for this effort should be a plan.

Editor’s Note: I like Roger’s cool detached manner of analyzing these sorts of issues. What he points out here is that the New York Green New Deal is really little more than a very expensive shot in the dark. I also note Minnesota, though it has a plan, isn’t accounting for the progress in natural gas technology. The promise of future cost declines that will make solar and wind truly competitive without subsidies is always on the horizon but the horizon keeps receding. And, then there’s this regarding Minnesota, of course:

During their testimony, Xcel Energy representatives stated that the company’s solar panels only produced 8 to 10 percent of their potential output because of snow cover.

Interesting, because here is the average Minnesota snowfall compared to New York: 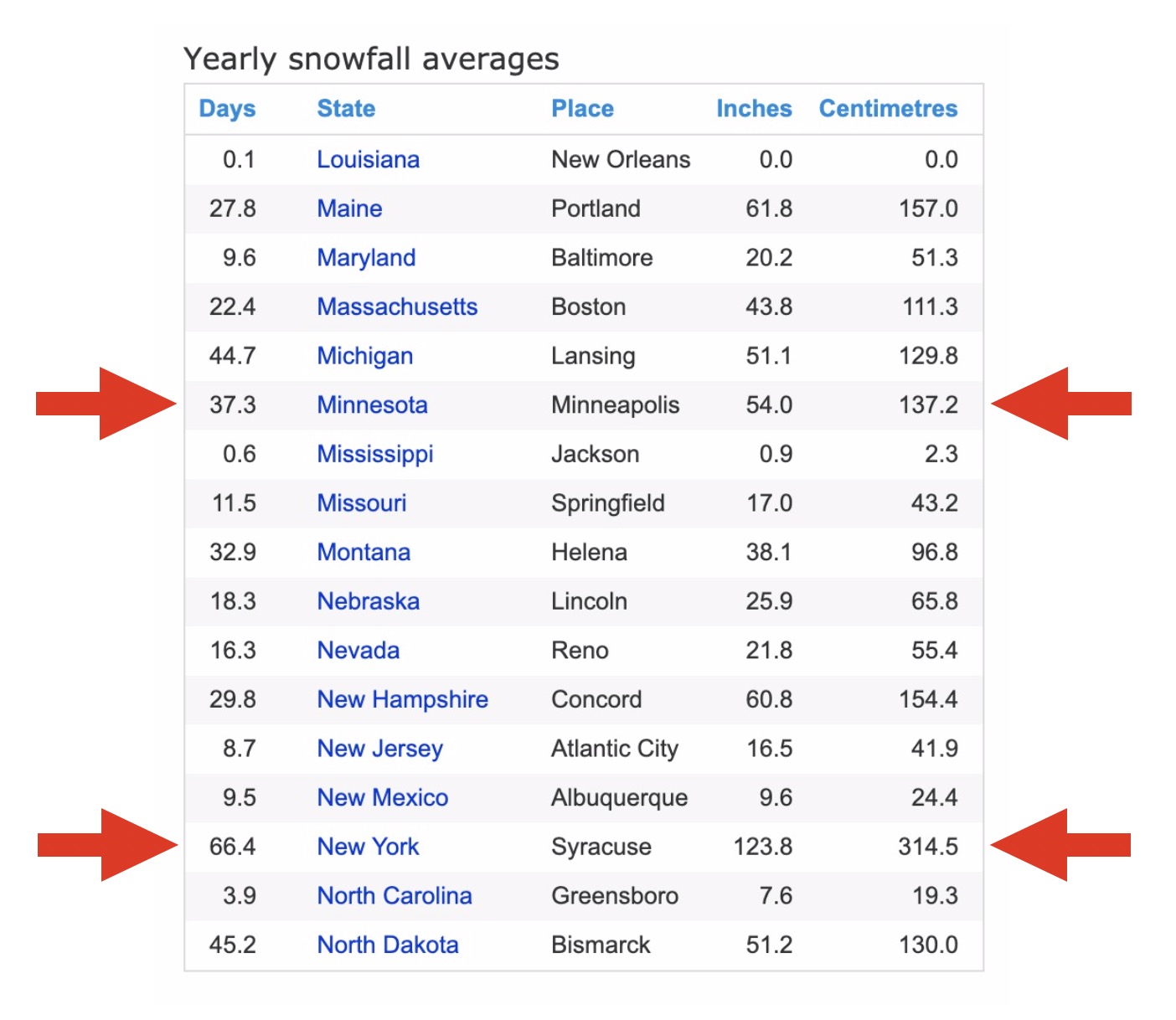 And, if you’re a fractivist you were thinking “if Minnesota can do it, then why not New York?”

4 thoughts on “The New York Green New Deal – Where’s the Plan? There Is No Plan.”