Proved reserves of natural gas and other natural resources grow with technology, a point modern Malthusians such as fractivists never quite seem to grasp.

Natural gas reserves can be looked at like a large iceberg: proved reserves consist of natural gas that is known to be recoverable, while underneath a huge rests a huge amount of reserves that may or may not be recoverable.

With each improvement in research, technology, and infrastructure, the amount of natural gas that can be retrieved from deep underground changes.

Proved reserves consist of natural gas that scientists know to exist and can be economically recovered with the current technology. This natural gas is like the visible, known ice in the iceberg metaphor.

For instance, in 2016 proved reserves of natural gas in the U.S. increased by 5%, or 16.8 trillion cubic feet (Tcf) according to the Energy Information Administration. Pennsylvania added the most reserves at 6.1 Tcf alone, while Oklahoma and Ohio followed with 3.7 and 3.1 Tcf, respectively. 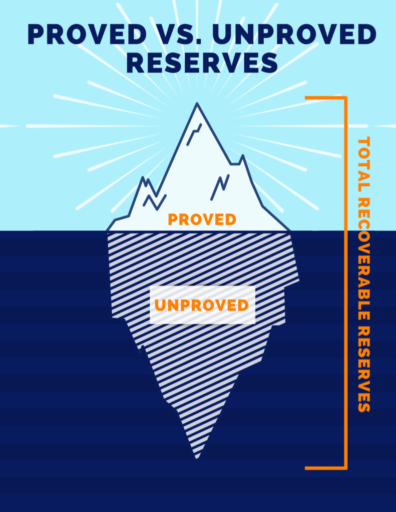 Reserve status categories define the development and producing status of wells and reservoirs.

Developed: Developed reserves are expected to be recovered from existing wells including reserves behind pipe. Improved recovery reserves are considered developed only after the necessary equipment has been installed, or when the costs to do so are relatively minor. Developed reserves may be subcategorized as producing or non-producing.

Producing: Reserves subcategorized as producing are expected to be recovered from completion intervals which are open and producing at the time of the estimate. Improved recovery reserves are considered producing only after the improved recovery project is in operation.

Non-producing: Reserves subcategorized as non-producing include shut-in and behind-pipe reserves. Shut-in reserves are expected to be recovered from (1) completion intervals which are open at the time of the estimate but which have not started producing, (2) wells which were shut-in for market conditions or pipeline connections, or (3) wells not capable of production for mechanical reasons. Behind-pipe reserves are expected to be recovered from zones in existing wells, which will require additional completion work or future recompletion prior to the start of production.

Undeveloped Reserves: Undeveloped reserves are expected to be recovered: (1) from new wells on undrilled acreage, (2) from deepening existing wells to a different reservoir, or (3) where a relatively large expenditure is required to (a) recomplete an existing well or (b) install production or transportation facilities for primary or improved recovery projects.