Combined-cycle natural gas power plants offer lower cost electricity than anything else, especially renewables, the true costs of which are never counted.

Our friends at the Institute of Energy Research have come out with a study that finally examines the true costs of renewables, including their impacts on the efficiencies of other energy sources. The Energy Information Administration has long studied the “levelized costs of electricit” or LCOE of different sources of power but hasn’t accounted for all the hidden subsidies, which often take the form of indirect costs on other electricity producers. Combined-cycle natural gas power plants typically come out best anyway, but the spread is minimized by failure to consider these indirect costs. This latest study does address them and natural gas comes out way ahead.

The focus of the study was to compare the costs of new energy generators with existing, across the entire spectrum, and existing generators are far more efficient than either solar or wind. New combined-cycle natural gas power plants also come out as especially efficient. The following chart depicts how much so: 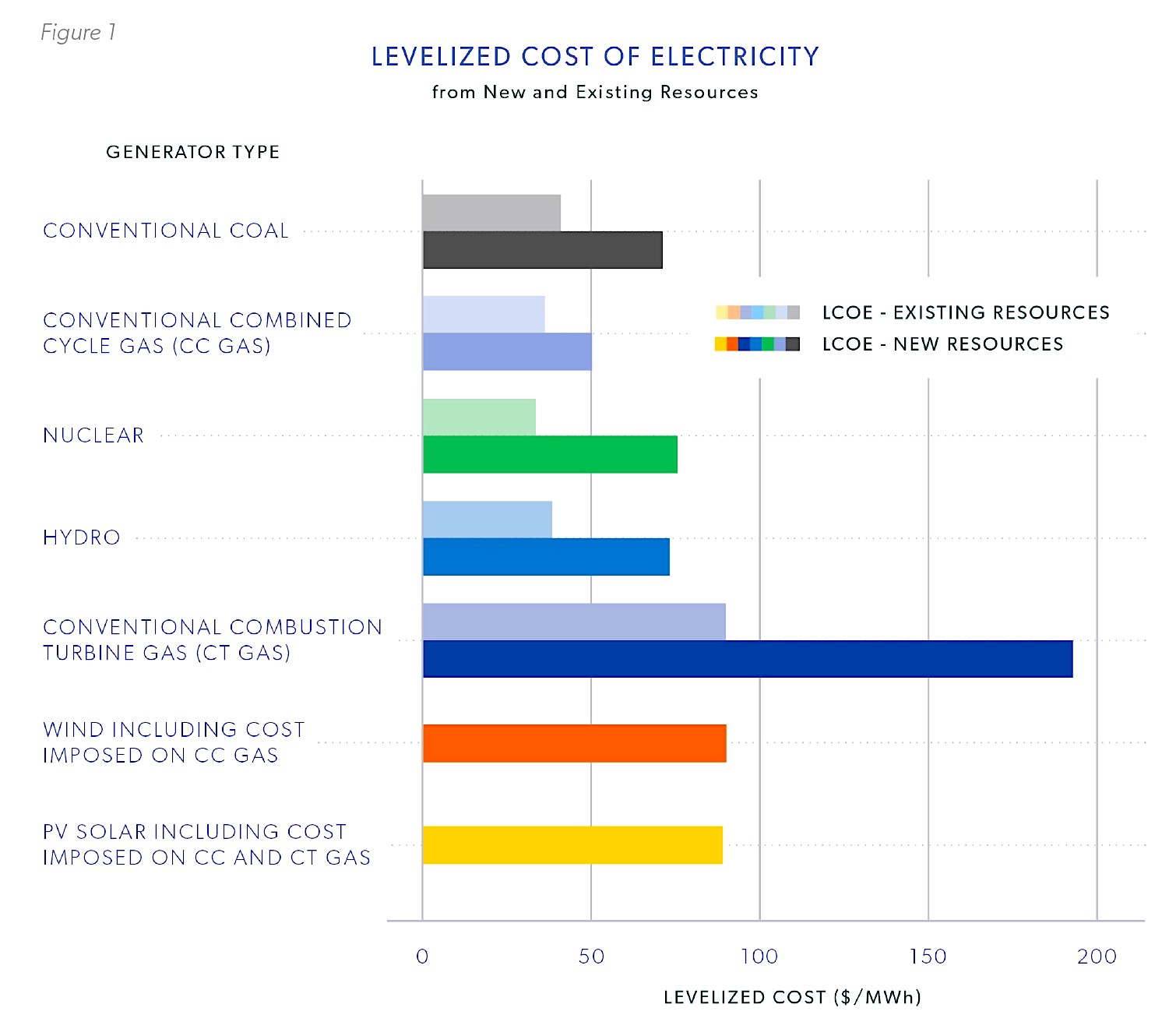 Notice only nuclear beats the costs of combined-cycle natural power as an existing electricity generator, and nothing beats it as a new generator. This to say it is the cheapest source new electricity generation and it runs about 35-40% less expensive than wind or solar. The key to understanding why is in the word “dispatchable.” Solar and wind demand dispatchable energy backup when the sun doesn’t shine and the wind doesn’t blow. Therefore, every solar and wind farm demands redundancy, which is always inefficient.

Think of it this way. Imagine there is such a thing as a completely solar-powered car. It will transport you whenever the sun shines and another 20 miles or so when it stops shining. Let’s say it costs you $30,000. It works fine around town on sunny days. It costs you $500 per month to buy and nothing to operate except for minimal maintenance.

But, if you want a car that works after dark, when its’s snowing or that will safely take you a 150 miles to visit your daughter, you need a second vehicle that is usable when you need it — a car that runs on gas or something comparable. The solar car would save you lots of gasoline and maintenance and make your dispatchable car last a lot longer, but you’d be paying twice as much in capital costs at the outset. More to the point, the value of your dispatchable vehicle would be steadily depreciating regardless of the miles driven and you’d be paying a whole lot more per mile to drive it. Your solar car would make your other car much more expensive at the same time that your capital costs doubled.

That, in essence, is the problem with renewables from an economic perspective; they only add to the cost and save nothing. They drive down the efficiency of everything. Here’s how the IER study explains it (emphasis added):

What is the levelized cost of electricity? The Energy Information Administration (EIA) defines it as “the cost (in real dollars) of building and operating a generating plant over an assumed financial life and duty cycle.” But EIA’s Annual Energy Outlook and similar LCOE reports focus only on new generation resources, while ignoring the cost of electricity from existing generation resources…

[W]e estimate existing combined-cycle (CC) gas power plants can generate electricity at an average LCOE of $36 per MWh, whereas we project the LCOE of a new CC gas plant to be $50 per MWh.

See what I mean? Renewables are no bargain for anyone. They’re like the second car that was going to save you so much money but left you with two car loans and less money in your pocket.

3 thoughts on “Combined-Cycle Natural Gas Power Beats Everything Else”