Kim Elliman, the gentry class Rockefeller boy who heads up the Open Space Institute and got paid $531,829 for it 2018, just said your land belong to us all.

I just received a letter I believe to be the most perfect illustration of the gentry class mentality that is at war with blue collar America. It is maddening in its pomposity, its condescension and its sheer arrogance toward landowners, families trying to make a living and the very idea of private property rights. It is simply outrageous, yet provides a window into the gentry class mentality and how it functions, which is valuable in the war in which we are engaged whether we know it or not. 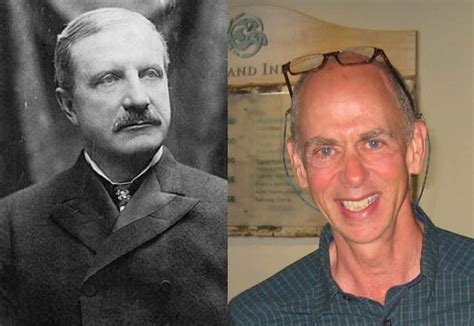 William Rockefeller (brother and partner of John D.) and his great-grandson Kim Elliman

Here is the text of the letter (emphasis added):

“This land was made for you and me.”  Over the years, this Woodie Guthrie lyric has become an anthem of our nation’s land conservation community.

But the murder of George Floyd, on the heels of countless other tragic acts of violence perpetrated upon black people at the hands of civil authorities have me questioning the unifying, optimistic sentiment. Is our nation’s land really meant for all?  Our history proves otherwise.

When we in this community talk about land, we prescribe certain values: clean water, clean air, access to recreation, etc. And while we can agree that these values are universally critical in supporting health and well-being for all, we must also acknowledge and respect the possibility that history and current circumstances influence the way others relate to the land. The times in which we are living require us to dig deeper into the role land and land ownership have played in creating the divides that are plaguing our nation today.

From our origins, land ownership and related practices have been translated into power and used to oppress, to deny rights, and segregate. Generations of black people were enslaved to work the fields, while native people were manipulated and forced to vacate their ancestral land.

Over the course of time, these racist tendencies prevailed. From denying voting rights to non-landowners to racially motivated redlining, our nation has used land practices and policies to diminish people’s rights and wield power over them.

These actions and many more have resulted in enduring systemic racism and economic disparity. Today, migrant farmworkers laboring on the land are denied security and tolerable working conditions and culturally significant lands are being destroyed and stripped of precious resources. And even now, for reasons stemming from economic factors or proximity, entire black communities are denied the considerable benefits derived from parks and the outdoors.

We in the land community have an obligation to open our minds to better understand the complex and, at times racist, history of land use. In order to repair damage done by a system from which we have all benefitted, we must commit to do more: take on issues of environmental justice, particularly as they relate to clean water, clean air, and climate protection. And we must also work to create more green spaces, and ensure that they are safe and welcoming, particularly in heavily populated areas – so that more people can enjoy the physical and emotional benefits of nature.

In doing so, we can live up to the promise of the old folk song — creating a nation where the land can, and will, belong to all of us, together.

As always, thank you for your friendship, support, and partnership.

You might ask what in the world a “land community” is. Well. if you read my article from five years about “making a wilderness,” you’ll get a strong hint; it’s about gentry class folks who have used their wealth and connections to drive working people off the land to capture it for themselves. If you’re thinking that’s exactly what Elliman is talking, you’re correct. But what you may not know is that Elliman is the great-grandson of William Rockefeller, the brother and partner of John D. Rockefeller. William created a preserve for himself in the Adirondacks by choking out local people just wanting to make a living off the land. Kim’s great-grand-pappy wanted it for leisure and locals out of there.

A century later, nothing’s changed. You can read about Elliman and his connections here and here. He’s an integral member of the NRDC gang, an investor, NYS-DEC Commissioner Joe Marten’s former boss and a key link between several big green groups. He’s been using the Open Space Institute to grab land wherever the Rockefeller family and friends like to play or build vacation homes, especially in the Catskills. They have finessed the art of scamming the system to make it pay to steal land.

But, now Elliman wants to use ginned up riots over a horrible crime already being addressed in the strongest possible way (with the President himself demanding accountability and welcoming legitimate protests) as an argument to steal even more land by regulating away private ownership. How much lower can the gentry class go here? There appear to no limits.

Notice how Elliman avoids using the word “landowner,” although he finds a place nor “non-landowners.” I guess they are akin to other stakeholders without a real stake, as we proceed ever further down the road of Newspeak. Notice, too, how he works in Woody Guthrie’s “This Land is Your Land.” It’s a thoroughly delightful tune but very few realize it was really a sarcastic response to Kate Smith’s “God Bless America” and, when originally recorded, included this verse:

There was a big high wall there that tried to stop me;
Sign was painted, it said private property;
But on the back side it didn’t say nothing;
This land was made for you and me.

Woody was a commie at heart, of course, and didn’t believe much in property rights. He even “wrote a column for the communist newspaper People’s World.” So, when Elliman quotes old Woody, who borrowed part of the melody from the Carter family, he’s saying “can’t we all dispense with all this property rights jazz and call it everybody’s, especially mine.”

Woody, who clearly borrowed the melody, felt free to give it away, which is hardly surprising. That’s not the way of the Rockefeller’s, though; they want the land for themselves and the rest of the gentry class. All the talk in this ridiculous letter is about gaining some cover and using a crisis to advance their own cause, which is to accumulate as much land under their own control as possible.

Old Woody may have been a dumb communist but, somehow, I don’t think he would approved of the NRDC gang’s style that much either. After all, he simply wanted ordinary folks to have the right to enjoy and work the land, not kick people off it, like Elliman’s great-grand-pappy did. Given time (Woody died at 55) he might have even developed a grudging respect for property rights.