Everywhere we look today, and especially with regard to fracking and global warming issues, blue bloods are doing all they can to shunt aside blue collars.

A few weeks ago NaturalGasNOW received a bit of a back-handed compliment from the New York Times. It was a story about the Rockefellers and the burning desire of some trust-funder members of that family to shut down the oil and gas industry that made them filthy rich. The article was by John Schwartz, with whom I  corresponded once. It wasn’t terrible as NYT articles go, but presented the Rockefeller story as if it were all about the high-minded goal of fighting global warming. It focused on the family’s battle with ExxonMobil, of course, that being a most interesting angle, given the family’s role in founding the company. But, with all due respect to Mr. Schwartz, that is far from the real story.

Here’s what Schwartz had to say about us:

It’s true I suggested it was time to RICO the Rockefellers and It was a damned good case I made, if I do say so myself. It’s also fair to say NaturalGasNOW is very pro-industry and we receive industry support. But, I wouldn’t describe us as “industry oriented” per se. No, we’re principally oriented toward the interests of landowners and rural America. Our slogan is “for our nation, our economy and our environment.” We recognize natural gas development as the single-best economic and environmental strategy for both rural and urban America. Natural gas development improves rural lives, saves urban consumers money, protects open space and lowers air emissions. What’s not to like?

Well, there is a lot to not like if you’re the Rockefellers, which I pointed out when I wrote posts for my friends at Energy In Depth. They contracted with me because I was passionate about the things above. I was delighted to aid the industry from my perspective as an advocate for rural landowners. The very best post I believe I wrote for them, in fact, was in March, 2013, and was titled “Cuomo’s Choice: Blue Bloods or Blue Collars.” A condensed version later appeared in the New York Post. Reading John Schwartz’s article, I decided an update was in order.

The original article was written a year and half before Andrew Cuomo decided to ban fracking in New York “at this time,” which infamously happened on December 17, 2014 with DEC Commissioner Joe Martens and Department of Health sycophant and fall guy Howard Zucker at his side. Indeed, I noted in the article that I had “received an e-mail from a supporter in the know back in September 2012 suggesting the New York State Department of Health would be the fall guy for a strategy of delaying any decision until after the Governor’s 2014 reelection.”

I’d like to say my friend was extremely prescient, but the signs were all there for anyone paying attention. Cuomo had appointed his ex-brother-in-law, Robbert F. Kennedy, Jr. and two other senior NRDC attorneys, along with several other NRDC allies to an advisory committee he used for a cover for a time, later quietly dropping it. He also had put Joe Martens in as DEC Commissioner, the latter being a NRDC toady who almost immediately returned there after the fracking ban was accomplished. Here is how I laid out things at the time:

So, not even counting the other natural gas opponents on the committee, there were effectively four top level NRDC representatives dominating any policy discussions.  And, that’s not even counting other friends of NRDC on the committee, friends such as: Robert Hallman of the NY League of Conservation Voters (where Kennedy, NRDC founder John Adams and other NRDC/OSI leaders serve as Directors and who curiously resigned as a Cuomo advisor amidst all this controversy); Mark Brownstein of  Environmental Defense Fund (where OSI Executive Director Christopher Elliman sits on the Advisory Board); Robert Moore of Environmental Advocates which proudly advertises itself as part of the “The Clean Water Not Dirty Drilling team” that also includes Catskill Mountainkeeper and NRDC.  Altogether, they still account for half the committee, even after it was expanded to supposedly achieve more balance.

I also observed the “pervasive influence of the NRDC on this issue within New York” was “very evident from a table depicting current and former associations of key representatives of NRDC, the Open Space Institute and their sister organizations.” Here is an updated version of that blue bloods table: 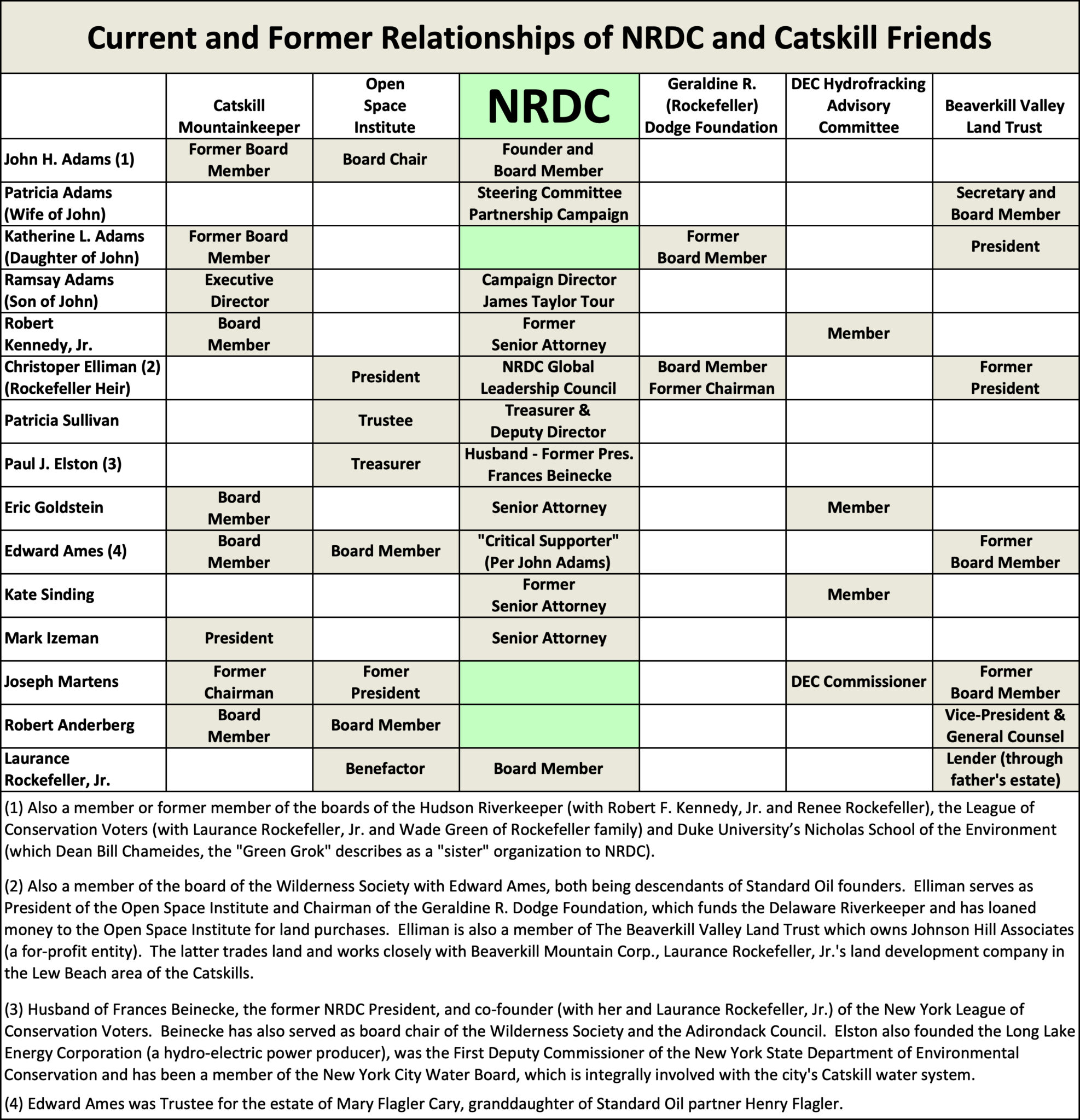 The story here isn’t about that long abandoned Hydrofracking Advisory Committee, which was nothing but a temporary fig leaf grabbed from the NRDC tree but, rather, about the pervasive influence of elites on policy. More specifically, it’s about the special interests of the Rockefeller family, which is the force behind not only #ExxonKnew but also the NRDC gang. And, what is this gang of blue bloods about? Well, it’s land, privacy, seclusion and maintaining distance from blue collar deplorables.

If, for example, one looks at property sales in the vicinity of Lew Beach, New York, where Larry Rockefeller has developed his Beaverkill Mountain development for NRDC friends, it is readily apparent the Open Space Institute and its affiliate the Beaver Valley Land Trust, together with a for-profit subsidiary called John Hill Associates, are shifting land among each other. Much of that land eventually gets shuffled into New York State ownership in such a way as as to create a tax-exempt open space buffer around the expensive second home estates of Larry Rockefeller’s buyers, effectively enlarging what is a private preserve for other elites at public expense. Those elites include not only Rockefeller clan members, but also Dan Rather, of course.

Rather bought in early and remains a big fan, especially of the fishing. A New York Times piece from 1987, though, tells us what it’s all really about; “Reversing Rural Blight in the Catskills” by which they mean replacing the working folks wearing Carhartt carpenter jeans  with the pampered Patagonia set. Here’s how it was described some 32 years ago (emphasis added):

Tom Miner, the environmentalist who is executive director of the Catskill Center for Conservation and Development in Margaretville, applauded Mr. Rockefeller’s efforts saying ”he is bringing zoning to areas where there is none, and at the same time protecting the land and the interests of the people who are buying it.”

And while local reaction has been overwhelmingly positive, a few people living in the valley have expressed worries that the Beaverkill may be heading for a two-tier, rich and poor society, as it was expressed by Lee Wulff.

Mr. Wulff, who has lived in the area for almost 60 years and may be its most famous fulltime resident, is the owner with his wife, Joan, of a world renowned fly fishing school which itself caters mainly to the wealthy, although people of more modest means often enroll.

”There is no question that Larry Rockefeller is a force for good here,” said Mr. Wulff, who puts some of his students up in the renovated inn, whose prices he equates with those of ”a Manhattan hotel in the wilderness.” Rates for a double room at the inn are about $300 a night, including meals.

”But the valley seems to be evolving into a beautiful park for rich people in which you have the wealthy and the people who wait on them,” Mr. Wulff went on. ”Improving the area is all to the good, but land values and taxes have gone up and the average man can’t afford to live here.”

…Mr. Wulff’s comments were echoed by Tillie Hoag, a long-time resident of the area living at Balsam Lake, who said she has repeatedly raised the question of whether the Beaverkill was going to end up, as she put it, ”being a valley of the elite.”

Tom Miner stated the truth, perhaps unwittingly; the idea was to protect the interests of the folks buying, that is to say friends of Larry, rather than those who lived and needed to make a living in what did, indeed, become a “valley of the elite.” No one can live there who cannot afford to buy one of those cool virtue-signaling and overpriced Patagonia jackets at what used to be the Lew Beach general store.

The friends of Larry, a/k/a NRDC gang, like it that way and that’s precisely why they hate natural gas development so much. Such development not only threatens their land scams, but also promises to bring true vitality to the people who live in these rural areas they’d rather make into wildernesses and empty out of most folks, except for like-minded Patagonia wearers and others with very special interests to protect.

Now, if only John Schwartz would write about that. He probably won’t, but he does strike me as a reasonably fair-minded fellow, or he wouldn’t have mentioned our “RICO the Rockefellers” piece. If he chose to do so, he’d uncover the fiercest element of the mega-battle we blue collars are in with the blue bloods. But, he would probably lose his job at the New York Times, which is the PR department for America’s plutocracy.

3 thoughts on “Blue Bloods or Blue Collars? The Mega-Battle We’re in with Elites”