Stamford, Connecticut, signed onto a fractivist initiative thinking there were only political points to be scored, but now finds it can’t fix its streets without creating more pollution.

Stamford, Connecticut, is the third largest city in the Nutmeg State. It has no shale gas but is home to roughly 131,000 free energy riders, many of whom suppose their natural gas and their petroleum products will always be delivered somehow. The majority of Stamford’s elected officials, in fact, imagined they could pander to fractivists and those unaware constituents by enacting a “frack wastes ban.”

They also supposed it wouldn’t effect them in the least while giving them a nice opportunity to morally preen. Now, it’s all come back to bite them in the behind as the city finds it can’t fix its streets without driving its trucks several hours to pick up 100% proven non-fracking waste asphalt, generating real air pollution in the process. 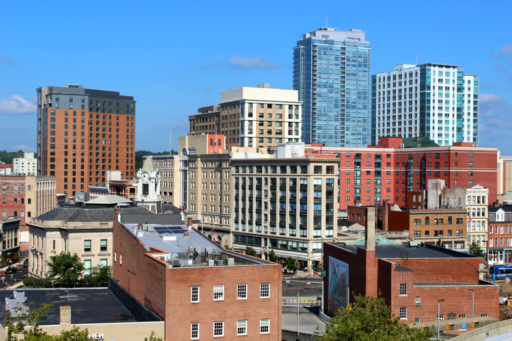 It’s amazing how politicians sometimes think in the short-term and they’re the best (or worst, depending on how you look at it), short-term thinkers there are. No price is too high if it doesn’t have to be paid until after the next election. And, if there is no price on the horizon at all, they are apt to do the dumbest things for the tiniest of rewards.

Last year, some 32 members of the Stamford Board of Representatives, in fact, voted for an ordinance prohibiting “waste generated from drilling and extraction activities of natural gas and oil.” You can read it for yourself, here. One lone member voted nay and three abstained. It was a free ride politically, after all, or so they thought. Here’s how the author of the legislation described its purpose, in fact (emphasis added):

“It’s so common-sense. I don’t understand why there wouldn’t be a statewide ban,” said city Rep. Nina Sherwood, a Democrat from District 8 who proposed the measure. “What’s more important than protecting people from toxic chemicals?”

Sherwood had 13 co-signers on the ban, including her Republican counterpart from District 16, Steven Kolenberg.

“This stuff can be radioactive, it can contain carcinogens, it seeps into the soil and groundwater. Some states are storing it for industrial use to make money, but it opens the door to all kinds of dangers,” Kolenberg said. “It’s up to municipalities to prevent this stuff from coming in.”

Fracking, which is cheaper than traditional drilling, involves boring a horizontal well and pumping it with water, chemicals and sand at extremely high pressure. The solution shatters the shale, releasing the oil and gas. Much of the solution then returns to the surface.

The nation is in the middle of a fracking boom, and companies are looking for places to store or treat the increasing amounts of waste.

How can there be so much ignorance displayed in so little column space? “Toxic chemicals” she says. Aside from the fact the chemicals are water, sand and things less toxic than we can find under our kitchen sinks, the reality today, of course, far different. Any liquid fracking wastes are typically treated at facilities in the midst of the gas fields and recycled for use in developing new wells. Any residue is rendered harmless enough to be reused for other purposes or safely disposed of in landfills subject to very strict state regulation. The supposed radiation problem with disposal of drill cuttings was also disposed of via an in-depth study by the Pennsylvania DEP.

Then, there is the fact the EPA is currently undertaking a study examining the potential for treating oil and gas wastewater and discharging the treated wastewater into rivers where there are acute water shortages. It can done while meeting Clean Water Act standards.

So, what were Stamford Representatives really doing? They were grabbing what they thought were free headlines based their own ignorance and their skill at propagating still more. A year later, they learned how much they really didn’t know. Here’s the story from the Stamford Advocate:

Mayor David Martin is seeking to ease a requirement in an ordinance that bans the use of asphalt made with fracking waste, the controversial byproduct of hydraulic drilling for oil and gas.

The ordinance, passed a year ago, requires contractors to sign a sworn statement, under penalty of perjury, that there is no fracking waste in the materials they use on a city job.

Martin wants to change the ordinance so the statement says, instead, that contractors certify, also under penalty of perjury, that after “diligent inquiry of our material suppliers,” they “have no knowledge of the presence” of fracking waste in products they use.

The city won’t get roads fixed without the change, said Martin, who issued a statement about it Wednesday.

“The administration agrees with the environmental intent of the ordinance and its prohibition on using gas and oil waste products in Stamford,” Martin wrote. “However, the unique purchasing requirement embedded in the ordinance is causing the city higher expense and delays in pothole, curb, and sidewalk repairs and does not appear to be advancing its intended purpose.”

The problem is that the city’s asphalt supplier, O&G Industries, does not want to sign the form required by the ordinance, Martin said.

“O&G Industries maintains that there is no fracking waste in their products, and are willing to certify this, but with language that differs from the current ordinance,” the mayor said.

The ordinance puts the onus on O&G to guarantee there’s no waste in their asphalt, and the company would be at fault if it were to be discovered, he said.

The city has been purchasing asphalt, which must be kept hot, from a Westchester County, N.Y., company, RCA Asphalt, which signed the form required by the ordinance, Martin said. But the extra time and distance “has created a 70 percent decrease in efficiency of pothole, curb and sidewalk repairs this spring,” according to the mayor.

Usually the city uses up to 22 tons of hot asphalt a day in the spring, he said. Because trucks are traveling to Westchester instead of picking up asphalt at O&G in Stamford, crews are putting down only 6 tons a day, the mayor said.

Schadenfreude, anyone? I know I’m feeling it, but this isn’t the worst of it. I don’t know exactly what trucks Stamford uses to haul its asphalt, but chances are they are tandem axle diesel vehicles and they’re not new. Here’s how much they likely generate in grams per mile of air pollutants, according to the EPA:

Combining these and converting to pounds yields 0.022 pounds per mile of air pollutants. Now, remember Stamford uses 22 tons per day of asphalt, which is probably two or three trucks per day and it travels to Mount Vernon, New York, some 21 miles or so, to get it. That means every trip generates 0.88 pounds of air pollutants and every day yields 2-3 pounds of unnecessary air pollution.

But, that doesn’t include the additional emissions involved in keeping the asphalt hot. Still, you get the idea. If Stamford works on its roads for 180 days this year, it could easily be putting a quarter-ton of completely self-provoked air pollution into the air, not to mention the additional traffic congestion, costs and lack of ability to actually fix the streets; all for the sake of virtue signaling on a non-issue about which Stamford Representatives know nothing,

The final insult to the intelligence of the rest of us is this; asphalt is a product typically manufactured today from petroleum products produced through hydraulically fracking (it’s not just for gas, you know). The “bitumen is the black or dark viscous material that holds the aggregates together, and is composed of polycyclic hydrocarbons (a petroleum byproduct).” So, Stamford has enacted a law that isn’t just stupid, but is the ultimate in hypocrisy. It wants the petroleum products produced by fracking, while it condemns this same fracking to score political points. And, of course, there are those deicers it surely uses, which often involve some of the same chemicals used in fracking and found in frack wastes (e.g., salt).

Shall we go on? I don’t think it’s necessary at this point. We know what a mess Stamford has created. They have no one to blame but themselves and their greed for political correctness points.