Fractivism has produced a number of spoiled children who seem to think they’re allowed to do anything without the normal consequences of their behavior.

Some children are never taught the life lesson that actions have consequences–and that you have to take responsibility for your actions. Some of those children grow into adulthood never learning that lesson. If you belong to groups that engage in “peaceful” blockades of fracking facilities or drill sites or pipeline sites, while shouting and screaming like you’re possessed, you might end up on a “watch list” by law enforcement.

Why? Because some who act the very same way you’re acting tilt over into acts of lawlessness such as sabotage and breaking things. It’s only prudent to keep an eye on groups of people who might be prone to such actions. But, if you’re a spoiled child who grew up to be a spoiled adult, a spoiled child of fractivism, you take offense at being held to account for your actions because, well because your actions shouldn’t have consequences. Your actions never had consequences when you were growing up. Why should they now?

We’re speaking about those who don’t like the fact that law enforcement and, yes, the drilling industry, keeps an eye on people who may be prone to breaking the law. 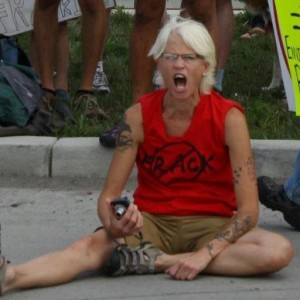 Case in point is Wendy Lee (pictured above), an avowed Marxist and philosophy professor at Bloomsburg University in Pennsylvania. (Why, exactly, do parents pay good money to send their children to that university? Good question!) Wendy didn’t like being questioned by a state trooper about trespassing at a compressor station site:

Lee is a 55-year-old philosophy professor at Bloomsburg University and proud anti-fracking activist.

“My long history of political activism is on the left,” she says. “I am the author of books with titles like ‘On Marx’ if that gives you an idea.”

She often travels to gas industry sites and takes photos. Her website is filled with criticism of fracking, and she’s used to getting criticized for her views.

Still, she was surprised last February when a Pennsylvania State Trooper came to her house to ask her about a visit she’d made to a gas compressor station.

On that trip, she was joined by two other activists and took some photos of the compressor. It wasn’t long before security guards told them all to leave.

“When they tell us to leave, we left,” she recalls. “There was no altercation. There was nothing.”

As the trooper stood inside her door, he questioned her about the incident. After a while, he brought up eco-terrorism.

Lee was stunned when he asked her if she knew anything about pipe bombs.

“Part of me was like, ‘Oh this is scary. This is actually scary.’” she says. “And part of me is just laughing on the inside because it’s ludicrous.”

Lee was never charged or arrested for anything.*

The Pennsylvania Trooper who questioned Ms. Lee was Mike Hutson. It rang a bell and when we trolled through the back articles we had written, we found that Trooper Hutson has been at this for some time. He investigated a string of pipe bombs found (along with other acts of terrorism) at drilling sites in four PA counties from 2012-2013 (see Domestic Terrorism on the Rise in PA Marcellus?).

Let us be perfectly clear: We are not saying, and not even remotely implying, that Ms. Lee has or had anything to do with pipe bombs and domestic terrorism. We’re quite sure she has not. What we are saying is that she should not be surprised that she might be considered a suspect because of her actions, her behavior in going where she had no right to go–and because of the type of activism she engages in. She’s running with a certain crowd, some members of whom cross the line. Law enforcement would not be doing their jobs if they didn’t consider all possibilities. She was investigated, and nothing came of it. Case closed. Move along. 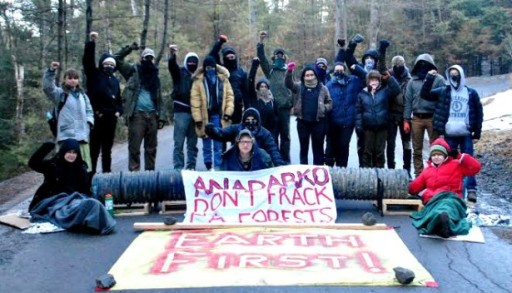 Walczack has represented fracking opponents as clients. He says a small percentage of activists resort to crime.

There have been reports of pipe bombs, charred debris, and gunshots fired at gas sites.

“But the vast majority of people who are involved today in the anti-fracking movement are law-abiding citizens.”*

Er, uh, OK. The “vast majority” of these “peaceful protesters,” these proponents of fractivism, are law-abiding; but not all of them! Where should Trooper Hutson look for those leaving pipe bombs at drilling sites–among landowner groups? Those who work for energy companies? Ah no. You look for them where they are; among the more rabid leftist elements in the anti-drilling movement – the spoiled children of fractivism.

14 thoughts on “The Spoiled Children of Fractivism”