Shell Utica Shale plans delivered to investors just 2 days after its announcement of the successful wells in Tioga County are eye-opening to say the least.

We were as excited as anyone several weeks ago when Shell announced its success with Utica Shale gas wells in Tioga County, Pennsylvania, near the border with New York State. The implications of finding viable Utica Shale 100 miles to the east of where anyone had previously thought possible were nothing less than huge. Shell’s leasehold interests on both sides of the border suggest enormous potential going forward. But, there’s more.

Two days after we wrote that post about Shell’s Utica Shale success, the company held a New York Investors Day at which Ben Van Beurden, Chief Executive Office and other top company officials presented the world-wide financial plans of Royal Dutch Shell for the foreseeable future. What was offered is even more exciting as their Utica Shale success was featured on four of the 65 slides put up for investors.  Here’s one self-explanatory example that paints the picture: 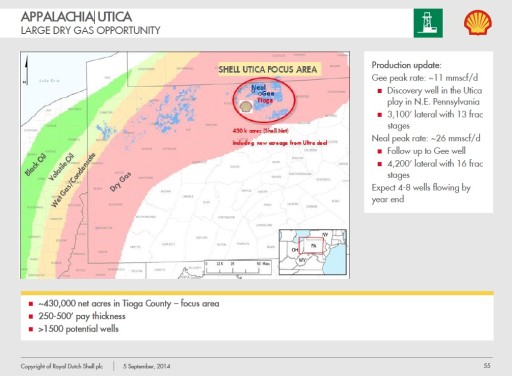 Notice the huge acreage just in Tioga County, which is complemented by adjoining acreage. Notice, too, the thickness of the shale (as much as 500 feet), the number of potential wells (1,500+) and the large initial production rates (as much as 26 million cubic feet per day of gas )

The significance of the location, though, really pops out on this graphic. It’s right there in the heart of the most productive part of the Marcellus Shale region and on the border with New York, indicating the double-dip shale opportunity for landowners in that area. This additional graphic from another slide provides a closeup and gives some additional perspective, as Tioga County is identified as a “sweetspot.” 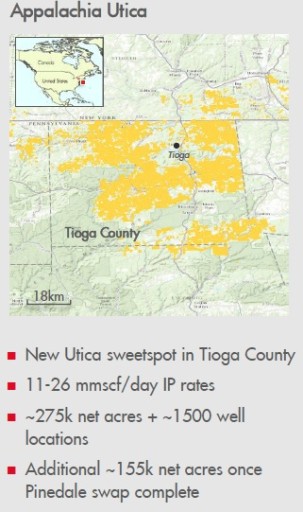 Shell is proceeding with its development plan and has committed to investors that the Utica Shale will be a big part of its economic future, which means it will be a big part, too, of the economic future of the region. It’s fantastically good news, as readers on the Natural Gas Forums clearly appreciate, as they’ve given our post there more than 5,700 views.

3 thoughts on “More on Those Shell Utica Shale Plans”