Tom Wolf is a vindictive guy and his 20-21 budget for Pennsylvania once again includes a proposed severance tax that will kill the remnants of our economy.

Tom Wolf’s “2020-21 Budget in Brief” only mentions a severance tax once, with this paragraph (emphasis added):

Last year, the governor unveiled Restore Pennsylvania, his ambitious infrastructure improvement plan that would invest $4.5 billion over four years in projects that would increase high-speed internet access, combat blight, assist communities with storm preparedness and disaster recovery, eliminate contaminants, clean up brownfields, build green infrastructure, repair rural roadways and develop new business sites. Projects completed through Restore Pennsylvania will be funded by the monetization of a commonsense severance tax and will help catapult Pennsylvania ahead of every state for the strength of its technology, development, and infrastructure.

Given the WuFlu and the governor’s stunningly incompetent management of it, shutting down our economy, instead of protecting nursing homes, priorities may have now changed. Make no mistake, though. Wolf will only double-down on on the double-speak about a “commonsense severance tax.” And, that makes no sense.

There’s no other mention of a severance tax in the budget itself, but a presentation of the budget by the Wolf administration included this (highlighting added): 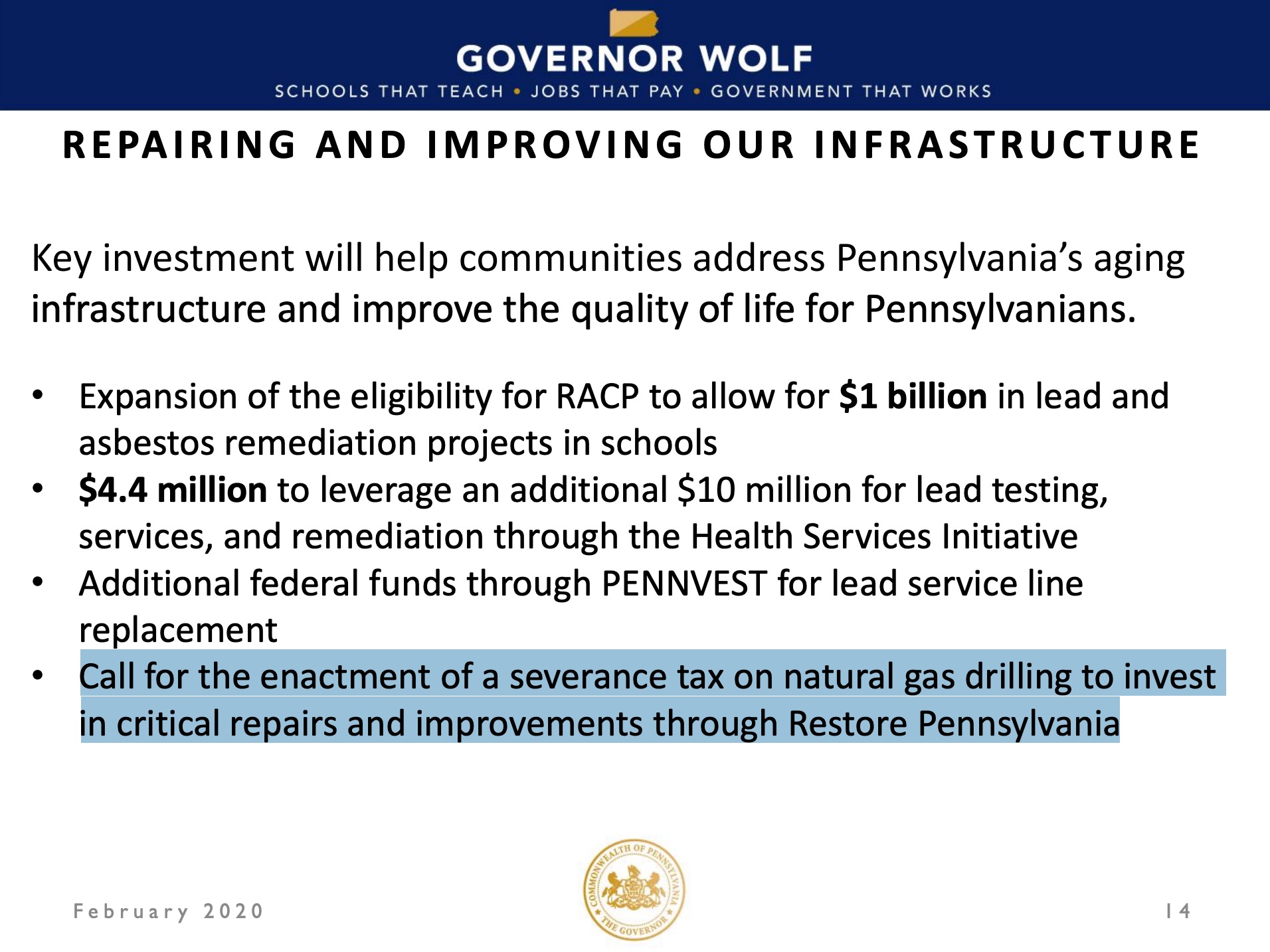 Once again, we see Wolf trying to link a tax with motherhood and apple pie. “If you don’t agree to go after these nasty profit-seeking drilling companies, you’re against “investing” in “critical repairs and improvements.” Substitute anything you want for the benefits (e.g., parks, schools, health) and you have the same message Tom Wolf has used for the last six years in trying to impose a second severance tax on Pennsylvania natural gas consumers, businesses and landholders. “Just let me tax them and I promise to buy you some beautiful presents with those other folks’ money,” he says to those he views as no more than sheep.

So far, it hasn’t worked, but there’s no doubt Wolf will try to leverage COVID-19 this time and repeat the schtick with vigor. That’s his style, after all. Yesterday, Colin Hanna, expressed here why this would be a huge mistake:

Now is not the time for Gov. Wolf raise taxes on an industry that already shoulders a hefty tax burden and contributes strongly to the state’s economy. The strength of Pennsylvania’s natural gas industry has already suffered egregiously during the ongoing crisis. Double taxation will never provide a fair business environment, nor will it give companies the confidence to resume hiring or start new projects. For an industry already on its knees, Gov. Wolf’s severance tax will further hamper a critical sector of the economy.

Unfortunately, Tom Wolf has never done especially well at listening to others. He does not engage, preferring to act above it all, which is why not only Republicans, but also Democrats, are so frustrated with him. Therefore, hoping he’ll do the right thing is a fool’s errand. He must, rather, be defeated yet again in his quest for a severance tax. The best advice comes from Jeff Kupfer in another guest post here yesterday:

Since the virus outbreak, the sharp drop in economic activity has hammered thousands of business operations that use natural gas as a feedstock. This contraction is reducing demand now, and unless there is a quick and sustained recovery, will continue to keep demand low. Across the border in Ohio, plans for a second ethane cracker plant were just placed on an indefinite hold.

Moreover, proponents of a new tax usually fail to mention that the Keystone State already levies a charge on shale gas, something that was enacted in 2012. It’s officially called an impact fee. But just like a tax, the fee is imposed on operating natural gas wells, collected by the state, and then distributed to state agencies and local governments to provide for public infrastructure, emergency and social services, and other initiatives…

Wolf is pulling out his usual playbook, as he has proposed a severance tax for six straight years. Each time, legislators have successfully pushed back, noting that the industry already pays its share and that is unfair to target it with a new levy. Those arguments are as relevant today as they have been in the past.

There’s no question about it. But, there are some additional points we need to make. A look at Tom Wolf’s 2020-21 budget detail indirectly reveals a few. Pennsylvania’s existing severance tax, the Marcellus Shale Impact Fee, is usually discussed in terms of the money distribute to localities under the legislative formula. But, there’s more to it than that. Here’s a little excerpt from the budget that identifies some of those extras:

The numbers are in thousands and you’ll note much of the $200± million that is collected from the industry each year is transferred to Conservation Districts, a housing fund and something called the Marcellus Legacy Fund. The last of these receives 40-45% of the taxes collected under the Impact Fee, in fact, and look where that money goes; bridges, environmental stewardship, hazardous site cleanups, recreation and the Commonwealth Financing Authority. There is very little press given to these benefits of the existing severance tax but they are substantial. This is in addition to other business taxes the gas industry pays and taxes on business account for 15.2% of the Commonwealth’s revenue: 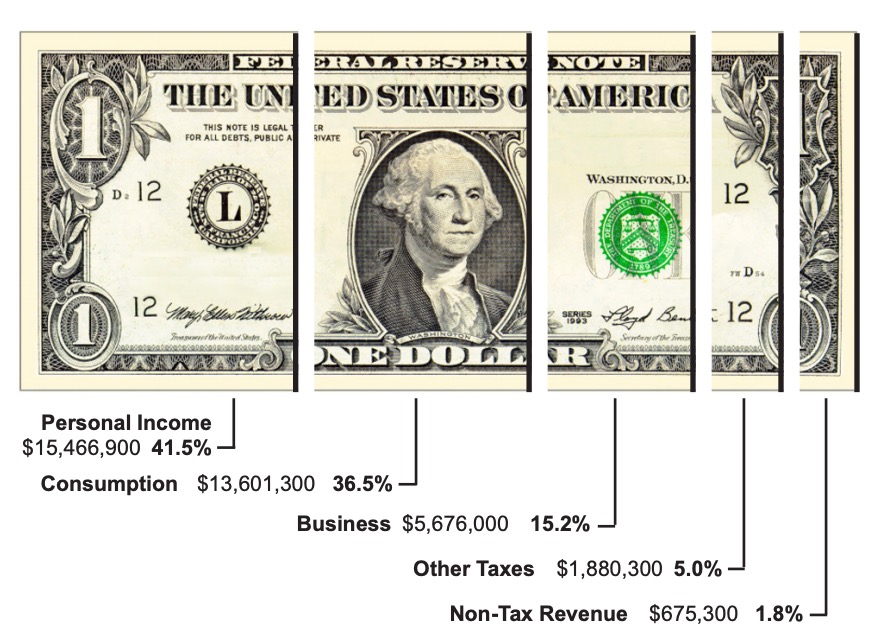 There is also an additional argument that needs to be made in the current COVID-19 environment. It is simple; our economy is already being killed by the lockdowns implemented by states such as Pennsylvania in response to the virus. Nationwide, the Census Bureau estimates retail and food services sales were down 21.6% in April, from one year ago. Clothing sales were down 89.3% in the U.S., furniture sales were off 66.5%, motor vehicles sales dropped 32.9% and food service and drinking places were at 48.7% of normal. Imagine how much worse the Pennsylvania numbers are if this is the nationwide figure. Now, imagine how much worse the Pennsylvania numbers are if these are the nationwide figures, given that some states didn’t shut down at all..

This is, in short, the worst possible time to impose an additional tax. Natural gas is used for heat and electricity, directly or indirectly, by all these businesses and they, together with landowners, residential consumers and the gas industry will pay any new additional severance tax. There is no way any of us can afford it. And, that’s a fact. We cannot kill what’s left of this economy with another severance tax on top of the one we already have!

1 thought on “Severance Tax? Sure, Let’s Kill What’s Left of the Economy!”