Renewable generation amounts to little in the big picture and must be backed up by dispatchable energy from sources such as natural gas. That’s reality.

Yesterday, one of my favorite commenters on NaturalGasNOW, an individual who goes by “Coffeeguyzz” reacted to a very popular guest post about the realities of electric generation in Connecticut by offering this:

At this posting, 4:10 PM eastern, natgas is providing 70% of the New England electricity generation.

Wind and solar combined is LESS than 1%.

This got me thinking and digging into what’s happening in other areas of the country. What I found is that renewable electricity generation is largely a farce.

“Coffeeguyzz” got his numbers, I believe, from ISO New England, the independent system operator of the grid in all of the New England states. When In checked this morning at 6:51 AM the renewable generation was up to 7% but this was at the low end of the scale, timewise, for demand, as the following chart illustrates, so renewable generation would naturally form a higher proportion of supply:

You might suppose 7% is respectable and, if you add hydro as a renewable, you could crow that renewables have reached double-digits. But, the devil is in the details as they say. First, let’s dismiss the hydro stuff as no one can build dams anymore in the modern political environment. Secondly, let’s look at what the other renewable electricity generation really represents. Here’s a breakdown of that 7% share: 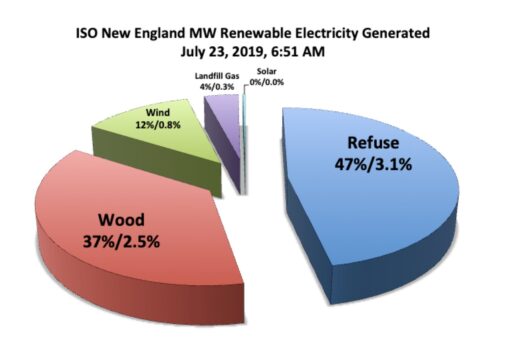 Notice that burning garbage and wood represent a combined 84% of renewable generation! Solar and wind combined, the supposed future for New England according to the green gospel, accounted for a mere 12% of renewable generation and but 0.83% of all electric generation. They are absolutely irrelevant, unless one put a horizontal turbine on the top of Mount Washington, which would undoubtedly spin out of control and take off like a fiery UFO. It wouldn’t be pretty (except, of course, if the thing traveled 95 miles or so due west and somehow landed near Burlington, Vermont, where the Manhattanites who have taken over the Green Mountain State seem to congregate, and scared the hell out of them.)

Not only that, but imagine trying to significantly increase electricity generated by burning garbage and wood. If you thought building dams was fraught with NIMBY issues, incinerators and industrial scale wood-burning are several orders of difficulties higher on that scale. And, the folks promoting solar and wind aren’t fans when those projects are planned in their vacation or retirement home backyards, either. Trust me; I know from experience representing New York State towns where fractivists insisted solar and wind were the answer until solar and wind projects were proposed in their backyards, at which point they reversed direction faster than a politician visiting the next town.

The New York ISO, by the way, exhibits the same pattern. Here’s how it looked at 10:20 AM this morning: 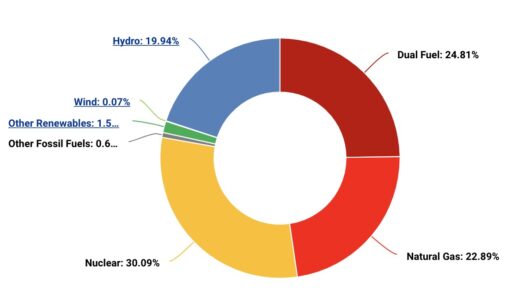 Wind, combined with “other renewables,” represented a grand total of 1.6% of electricity generation and the latter, once again, includes solar, methane from landfills, refuse burning and wood burning. Therefore, we can safely assume New York’s numbers are even more ridiculous than New England’s.

Here’s the situation with the PJM Interconnection, an ISO covering Pennsylvania, New Jersey, Maryland, Virginia, West Virginia and parts of four other states: 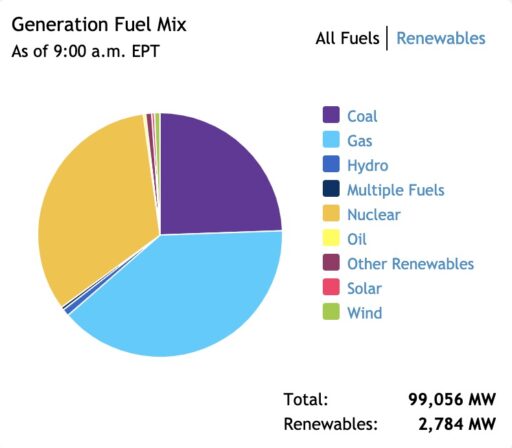 Yet again, solar and wind accounted for a mere 1,058 megawatts or 1.07% of electricity generation. And, here is the Midwest ISO (Indiana to Manitoba, Canada) picture: 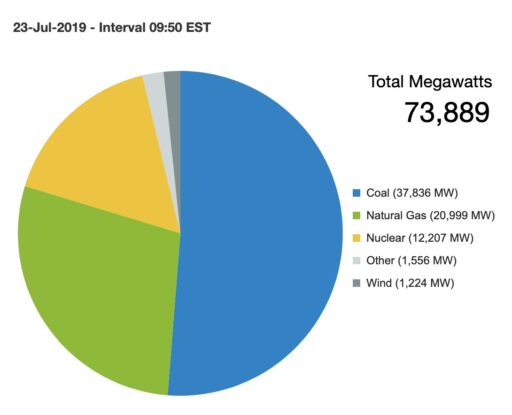 Solar doesn’t even show up on this one, although it’s presumably part of “other.” Wind accounts for 1.7% of electric generation.

Not even crazy California, which pays a fortune for electricity and a second fortune for renewables subsidies, and faces brownouts and blackouts as a reward on these investments, is doing no more than 17% solar and wind generation this morning:

Meanwhile, look at the contributions of natural gas, which more than double solar and wind in California, despite the conditions being ideal for both renewables and the fact the state has relentlessly pushed their use. And, in New England gas accounted for 59% of electric generation this morning. That’s the renewable generation reality. It’s very kind to natural gas, but a portrait of misery for fractivists.