Drive-by pipeline opponents were knocked out in a New Jersey court of appeals decision regarding the Southern Reliability Link pipeline project.

A recent decision by the Appellate Division of the Superior Court of New Jersey just rejected the appeals of drive-by pipeline opponents to stop a tiny pipeline project in Burlington, Monmouth and Ocean Counties. It amounts to a 0.68 mile long portion of a 30-mile natural gas transmission pipeline known as the Southern Reliability Link, which is intended, in part, to ensure another “Sandy” storm doesn’t leave Garden State residents stranded without natural gas. What’s interesting about this decision is the fact the court clearly grasped what it was dealing with in this instance – drive-by pipeline opponents so blinded by their ideological opposition to oil and gas they were unable to make their case. 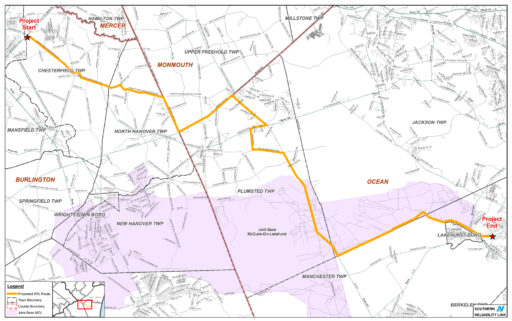 When I say “drive-by pipeline opponents” I’m referring to how the court characterized the individual appellants in this case as it refused to give them legal standing (citations removed, emphasis added):

The burden of providing facts to establish standing is on appellants. Our review of the record, which appellants have not moved to supplement reveals: Agnes Marsala did not state where she resided, only that she had previously driven past the affected area; Rita Romeu noted that she was a resident of Chesterfield but…did not provide any facts to establish her personal, pecuniary or property interest that will be affected by the pipeline; Glen Ashton did not state where he resides or his personal interest in the pipeline project; Katherine Marlin did not say where she resides; and Michael Marlin did not speak at any hearings and the record is bereft of any interest he has in the pipeline project. Thus the record before us is insufficient to establish standing for the individual appellants.

Isn’t this fascinating? Not one of the individual appellants could establish any really impact of the pipeline project on their lives; they were, and quite literally in the case of Agnes Marsala, drive-by pipeline opponents only. Marsala and Romeu, though, are President and “PHD,” respectively, of People Over Pipelines, Inc., which was recognized as having standing due to its “representation of people from various municipalities through which the pipeline will be constructed established its standing.” That’s arguable, of course, given the group’s intro to themselves on their About page:

“Meet the grassroots activist who have fought for our communities and the earth.”

Apparently, if you say you’re fighting for “our communities and the earth” you have legal standing in any case, anywhere, anytime. It always help, of course, to have someone who insists on identifying themselves as “PHD” and “Dr.” even though the doctorate is in “Education Leadership and Administration, General.” But, hey, she’s also Mayor of Chesterfield, where 57% of housing units and growing are served with natural gas, according to the Census Bureau, and another 31% still relay on fuel oil, so she must know something.

Notwithstanding this, People Over Pipelines, Inc., clearly doesn’t know much. Here is how the court dispensed with the arguments of these drive-by pipeline opponents:

The Department’s determination, fairly supported by sufficient evidence in the record which we have closely reviewed, was not arbitrary, capricious or unreasonable. Consequently, we affirm…

We are unpersuaded by POP’s arguments that the Department granted the permit without making requisite factual findings and that there is insufficient credible evidence in the record that the statutory CAFRA criteria were met. Our review of the permit and related twenty-six page environmental report and fourteen-page response to public comments belies POP’s former argument which, itself, is a meager, bald assertion unsupported in the merits brief by any facts. The documents prepared by the Department adequately “set forth basic findings of fact, supported by the evidence and supporting the [Department’s] ultimate conclusions and final determination,” thus fulfilling its substantive responsibility to the public and the courts…

The Department need not, contrary to POP’s contention, respond to each individual criticism or concern raised by public comment or scrutinize all potential alternatives to an applicant’s proposal. Nor does it need to address factors that are not set forth in N.J.S.A. 13:19-10, including alleged impact of the project on global warming. It need only set forth, as it did here, its findings regarding the enumerated factors…

Ouch! And, this from a New Jersey court. There’s yet hope for the Garden State.