The Port Ambrose LNG import project is the subject of a deliberately perpetuated delusion intended to fight fracking while keeping wind power elsewhere.

Every television show and every fad seems to have its “jump the shark” moment when things move from the sublime to the ridiculous, proving the emperor never had any clothes to begin with. Its good, in that vein, to remember how the Salem witch trials ended; when the accusers suggested the governor’s wife might be a witch. The debate over the Port Ambrose LNG import facility exhibits that same meme (to use one of those trendy words momentarily in vogue). Like a bug zapper, it has attracted seemingly every usual suspect, every self-righteous, narcissistic wacko and every controversy hustler out there, all of whom are drawn into the trap with delusions of grandeur – victims of the Port Ambrose delusion.

Many readers will have never heard of Port Ambrose, as it is a rather straightforward  proposal to address Long Island’s natural gas needs by construction of a Liquified Natural Gas (LNG) import facility that would provide another source of gas to the area; something one would expect most residents might appreciate. The usual suspects among fractivists have heard about it, though. They’ve jumped on it like a rooster with new hen (otherwise known as the “Coolidge effect”).

The Port Ambrose debate has, in fact, has attracted fractivists in inverse proportion to their credibility, all founded on nothing more than a baseless assertion that a LNG import facility could easily later be converted to a LNG export facility – absolutely no evidence required, of course. They’re all there, from Craig Stevens, the motormouth hustler from Susquehanna County, Pennsylvania to Bruce Ferguson, the hot head retiree from 60 Minutes to Minister Erik McGregor, the flamboyant clown from the insane Sane Energy group.

One dares to wonder; could this be another opportunity for Andrew Cuomo to demonstrate his appeasement credentials and win the Neville Chamberlain Award for Most Obsequious Demonstration of Political Correctness by an Elected Official? Given the way other politicians are cracking under the pressure from the likes of the Catskill Mountainkeeper’s Betta Broad (you can’t make this stuff up), it’s possible. Here’s Betta posing for the camera with her “Love NY: Don’t Frack It Up” button and a petition: 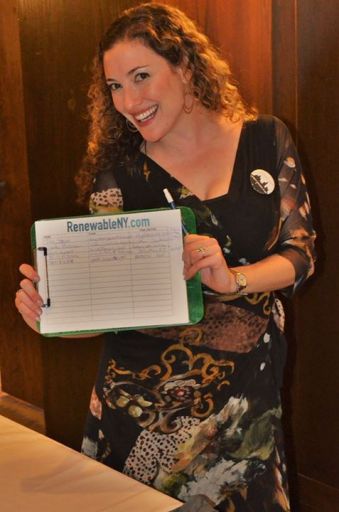 Betta is apparently responsible for this essentially fraudulent video that perpetuates the Port Ambrose delusion (watch the whole thing and count the distortions):

Betta Broad and Susan Van Dolsen produced the video. They’re both serial protestors clever at spinning a human interest story short on facts and long on speculation. They throw in every possible scare word they can imagine, from explosions to radon, combined with what can only be described as wild-eyed speculation the oil and gas industry is secretly planning, once they’ve got approval of an import facility, to convert Port Ambrose to export so they can move “fracked gas” to Europe. It’s nothing less than bizarre but they’re getting away with it.

The draft EIS recently released on the Port Ambrose project, for anyone bothering to read it, makes it clear this conspiracy theory is looney. Here’s what the United States Coast Guard says, in fact:

“Please note that this application is only for the construction and operation of a deepwater port that could only be used as a natural gas import facility. The considerable technical, operational, and environmental differences between import and export operations for natural gas deepwater ports is such that any licensed deepwater port facility that proposed to convert from import to export operations would be required to submit a new license application (including application fee) and conform to all licensing requirements and regulations in effect at such time of application. In addition to payment of the application fee, licensing requirements include, but are not limited to, completion of an extensive environmental impact assessment and financial resources review which would include public participation.”

Trying to sneak in a LNG export facility by applying first for an import facility permit makes no sense, but that doesn’t even give pause to the band of malcontents pushing the Port Ambrose delusion, because they have broader objectives and this is merely a target of opportunity. They want to use it to fight fracking (hence the involvement of Catskill Mountainkeeper and Catskill Citizens) and expand their base of support into areas that already benefit from natural gas development.

We must also remember these are serial protestors who cannot resist the draw of another cause to feed their considerable egos. Take a look at this picture and ask yourself whether you’d buy a used car from any of these people. It’s an old line but highly appropriate in this instance: 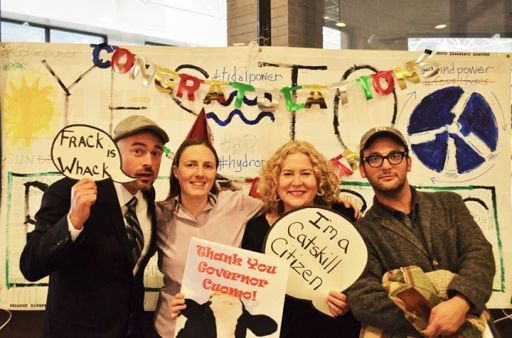 These are some of the fractivists celebrating Cuomo’s fracking decision in Albany. David Braun is on the left and is Senior Organizer with New Yorkers Against Fracking (a Food & Water Watch initiative). Moving to the right, Julia Walsh is a founder of Frack Action, Sabrina Artel is the host of Trailer Talk and, of course, there is the big huckster, Josh Fox. All four are on the take from the Park Foundation and friends, doing Jay Halfon’s dirty work.

All four are involved in spreading the Port Ambrose delusion, with three of them being signatories on this letter of opposition along with such phonies as Pam Solo, Isaac Silberman-Gorn, Maya van Rossum and Barbara Arrindell. Every one of them is on the take from Jay Halfon’s friends, in fact, as are most of the signers from crackpot organizations all over the country, several of whom list their names under obscure associations (e.g., “City of Binghamton Residents Against Hydrofracking” in the case of Gorn) to hide the fact they’re largely paid activists who all work for the same people. These serial protestors are just the useful idiot faces of those entities.

There’s another reason these folks are so invested in the Port Ambrose delusion, however. It’s their renewables religion. Betta Broad carries a petition for renewables, her video ends with a renewables appeal and the picture of the four used-car salespersons includes (in the upper right-hand corner) the words “wind power” above a crossed-out “fossil fuels.” These are true believers who see wind, not as a supplementary source of power that broadens our energy base, but as the holy grail – something to believe in and fight for with fervor.

There’s nothing wrong with that, of course. I’ve happily consulted on, promoted and helped gain approval for wind power projects. I’ve also stood before a large crowd of wind power opponents (almost all from the metro area) to take the barbs of Catskill second-home residents who opposed any wind towers in their back yards. Trust me, they are as vicious in attacking wind as they are fossil fuels if it’s anywhere near them. One can only imagine the Catskill Mountainkeeper’s position on wind towers on Peekamoose Mountain or anywhere near Lew Beach. No, the Mountainkeeper wants them off another beach in Long Island in the same sound where Port Ambrose is proposed and this is a nice twofer for them: fight fracking in the Catskills and get those gullible Long Islanders to take the wind down there. What could be better?

It’s so easy to push for projects in other neighborhoods or for projects you imagine don’t have a prayer of actually succeeding. Gas was like that once when the lecherous Bobby Kennedy, Jr. was promoting it as the alternative to coal. He switched his mind when gas unexpectedly became much more possible in places he never thought it could happen. He did the same thing with wind, helping to lead opposition to a project near the Hyannisport family haven. It’s hell when you get what you wished for, if you’re a demagogic environmental wacko like Kennedy.

It’s likely to be the same on Long Island. The huge off-shore wind project proposed for there is currently going nowhere, so it’s safe to advocate for it as the alternative to Port Ambrose (which opponents seem happy to recognize as an import facility when they want to substitute wind for it). If it truly progresses, however, we can expect a different attitude, as this article from just eight years ago makes clear. Be sure to read it, as you’ll find some fascinating insights into why wind power is no panacea and most people are only for it in the abstract, though a few will pay extra.

Meanwhile, the half-life of the Port Ambrose delusion gets a new lease every day as spineless politicians enable the antics of a group of serial protestors who will, when this issue is decided one way or the other, simply move onto the next, yet again demonstrating the “Coolidge effect.”

4 thoughts on “The Port Ambrose Delusion and the Coolidge Effect”