The supposedly grassroots fractivists who wage the war against natural gas development that is so benefitting our nation and so needed in some rural areas, are really just special interest pawns.

Most readers know I spend a fair amount of time researching the role and finances of special interest foundations and other gentry class organizations in supporting the activities of fractivists. It’s a bottomless pit of information and almost every day I learn something new about the way America’s aristocrats are manipulating what appear to be grassroots organizations. Very few, if any, deserve that label but many claim it, and, in the course of some other research, I discovered one such group that provides a perfect example requiring that you join me on a little journey if you want to know how it works.

Let’s start our journey in Williamsport, Pa. with a group of fractivists known as the Responsible Drilling Alliance (RDA). Their radical nature is evidenced by their complaint against Penn State University because it said nice things about shale gas.

This is what they say about themselves (emphasis added):

RDA is a grassroots group of dedicated citizens who have formed an alliance and welcome members with the widest possible concerns, interests and ideologies. RDA membership includes parents and grandparents, students, business people, hunters, fishermen, farmers, hikers, teachers, truckers, those who have leased their land to a gas company, and those who refused…Through outreach programs, events, public forums, and our weekly e-letter, we strive to balance the conversation with authenticity.

If you got the mistaken idea from this description that RDA was representative of broad-based public opinion in the Williamsport area – just a case of the local citizenry speaking out on an important issue affecting the area – then you haven’t connected the dots yet. So, let’s continue our journey by heading south roughly 160 miles to the Chesapeake Bay.

The Chesapeake Climate Action Network (CCAN) is the first grassroots, nonprofit organization dedicated exclusively to fighting global warming in Maryland, Virginia, and Washington, D.C. Our mission is to build and mobilize a powerful grassroots movement in this unique region that surrounds our nation’s capital to call for state, national and international policies that will put us on a path to climate stability.

Sounds very high-minded, but the last we heard of this group it was hooking up with 350.org which endorsed putting on masks, lighting torches and doing the KKK routine at the home of a Cove Point LNG terminal supporter. Nice people. 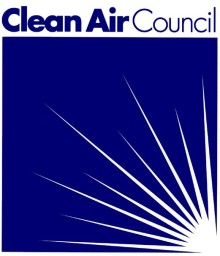 Now, let’s head northeast 125 miles or so to Philadelphia, where the Clean Air Council (CAC) is located. This group protests anything and everything connected with natural gas. It is led by Joseph Otis Minott, Esq., an attorney who grew up with the organization and taught a course at the University of Pennsylvania on the subject of “Violence and the Environment” exploring “why violence has been seen as an acceptable or sometimes the only way to achieve a desirable end.”

The CAC is supported by the Heinz Endowments and claims this:

Now, let’s put another dot on the map by moving northeast another 80 miles to New York City where the falsely named Damascus Citizens for Sustainability maintains its official address. This is a group of Manhattanites who have moved to or maintain second homes in my home town of Damascus, Pa. They are Josh Fox groupies, in fact, who engage in nonsense such as this, comparing the gas industry to tobacco. Their history?

Director Barbara Arrindell of Damascus Township, PA, who has a degree in bioengineering, understood from the beginning the threat posed by the natural gas industry. In February 2008, she gathered together a group of concerned citizens to form this nonprofit organization. The group immediately launched a public awareness campaign through a series of direct mailings and meetings regarding the dangers of gas drilling.

Next, we head north 100 miles to Fremont Center, New York (just across the river from the real Damascus, which is in Pennsylvania), where there is another organization of fractivists called Catskill Citizens for Safe Energy. This one is run by former 60 Minutes producer named Bruce Ferguson.  They put out perhaps the most outrageous piece of anti-fracking literature we’ve seen to date, which is more fully described in this post. The group refers to itself as follows:

…an all-volunteer, grassroots org that has been working to protect the public from dangerous fracking since 2008.

From Fremont Center we continue north another 60 miles to Cooperstown, where a group called Otsego 2000, works with the Ommegang beer folks to stop gas drilling, while the latter dumps its wastes in the Susquehanna River. It has also fought the Constitution Pipeline and says this about its work:

Advocacy campaigns have been the cornerstone of our work… ranging from grass roots advocacy to high-level lobbying.

Our next to final stop on the journey is Planet Ithaca, some 80 miles to the west (and about 90 miles from our point of journey departure). This is where the Community Environmental Defense Council (CEDC), a Park Foundation creation is found. It serves as the vehicle for lawyer David Slottje and family to advise communities how to enact gas drilling moratoriums that tend to get overturned when challenged. The Slottjes, former dollar store attorneys never known for modesty, say this about their work:

The lawyers at CEDC are winning the fight for the right of communities to ban fracking and against corporate profit mongering and its wake of pollution, dirty secrets, and fractured communities.

But our work is only made possible by the heartfelt support of individual donors.

This Civil Society Institute is located in Newton, Massachusetts, almost 200 miles to the east, just outside Boston, which is where we end our journey, but the funding of all these fractivists begins. Yes, all seven of these regional fractivists, the green dots on the map, are connected by funding from an organization located in Boston, far from any fracking. 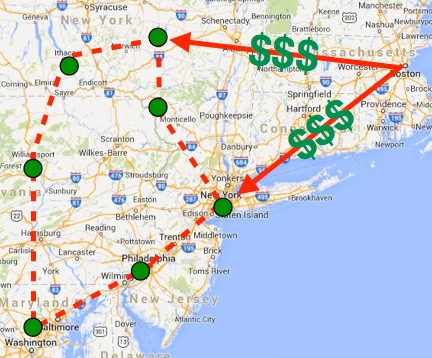 Who is this Civil Society Institute? Well, it’s the latest protest vehicle for a serial protestor by the name of Pam Solo. Solo was a nun (and is still a co-member) associated with the radical Sisters of Loretto, whose newsletter reads like a climate change diatribe these days. 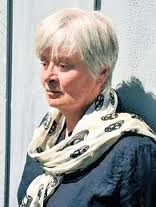 Solo apparently started as a Vietnam War protestor who, when the war ended, had to face the reality “there wasn’t much left for us to do in terms of grass roots mobilization” and so she went on to protest the Rocky Flats nuclear weapons plant, which provided a new cause for her. Then she became associated with something called the Peace Institute, the nuclear freeze movement, Congresswoman Pat Schroeder’s presidential campaign, embryonic stem cell research and a host of other causes, bouncing around from one cause to the other depending on what was trendy at the time with the gentry class.

The gentry class pays well, you see, and along the way the former vowed nun, who still claims to be a sister of sorts, has done very well catering to them. She pulled down $464,051 from the Civil Society Institute and related enterprises in 2012 and a total of $1,655,706 for 2010-2012. Not bad for a nun, whose job was apparently limited to passing out some $5,018,077 in grants for those years. That’s a 33% commission. I’m Catholic; can I become a co-member of the Sisters of Loretto, too?

Earnings like this apparently allowed Solo to invest in a restaurant franchise called O’Naturals (another cause) that later went belly-up and, most likely, this fashion shoe enterprise launched by her son. She was given $35 million in the 1990’s to launch the Civil Society Institute and, although the glowing article about it doesn’t mention who it came from, the donors were members of the Lutz family.

One of the co-founders is artist Sally Lutz and the money today appears to come from Sarah Lutz, another artist and her husband John Van Rens through the Lucretia Fund, which is, for the most part, simply the Civil Society Institute in another guise. Pam Solo is on the board of that, too, and the bulk of their money is invested in HCC Feeder Fund, one of those slightly suspicious Cayman Islands funds.

Where the money really comes from is unclear, for obvious reasons. We can be reasonably sure it doesn’t come from selling art, though, and the tailoring of their grants in recent years to a circle of fractivists in the Marcellus Shale region suggests a very specific special interest. It certainly isn’t what Solo suggested back when she got that $35 million (emphasis added):

Solo says she has a plan of action and that she is optimistic about changing such institutions as business and government that, she maintains, make our society not very civil…We are also looking at the way business and the economy contribute to inner civility…A big part of our message is that we have to take responsibilityfor our community, our families, our own behavior, and our own nastiness. At the same time, we have a right to expect that the institutions that run our society, government and business also have rights, responsibilities and roles to play in that.

That Solo didn’t mean a word of this is evident from the actions of those she funds while taking down that huge salary. She’s funding the nastiness of Attorney David Slottje whose response to disagreements was a “Lawyer Up Big Guy” threat. She’s funding the nastiness of Catskill Citizens when they put out this, complete with skull and bones” imagery: 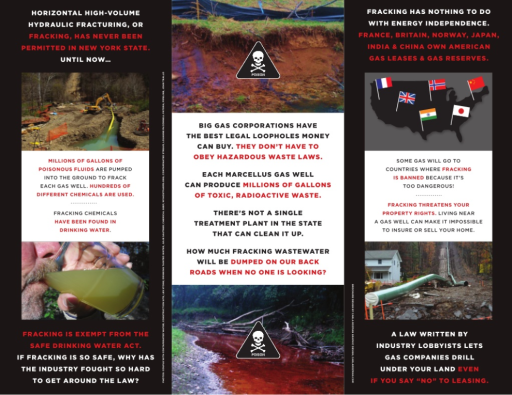 She’s funding the nastiness of CCAN, which associates with the sort of people who think masks and torches events on someone’s lawn are an appropriate way to engage in civility.  She also funds the Sustainable Markets Foundation, which funded The Flowback and 350.org (which directly endorsed the masks and torches).

Solo and the Lutz family are funding the nastiness and the hysteria generated by all these fractivists and that’s what you learn when you connect the dots. The fractivists represented by RDA, CCAN and all the others aren’t grassroots in any sense of the word. They might have started out that way at some level, but what sustains these enterprises in nearly every case is special interest money from far outside the affected areas. Fractivists are but pawns in a chess game being played for those special interests by professional serial protestors who make a damned good living doing it.

14 thoughts on “Connecting the Dots: The Grassroots Fractivists Who Aren’t”