America is now governed by a ruling gentry class of plutocrats who, in the name of charity, manipulate the system at will to the detriment of the common man they too often are content to keep in poverty.

Last July I wrote a post here called America’s Plutocrats and PovertyKeeepers about how the spoiled children of the uber-wealthy were determining too much of the direction of the country. It’s only gotten worse since then and the same group of plutocrats continue to impoverish ordinary people who live in rural areas as if they were nothing more than collateral damage in an air war safely directed from the bowels of the beast on the Upper West Side of Manhattan.

They managed to manipulate Andrew Cuomo into making the Southern Tier a sacrifice zone (their words) for the purposes of advancing their feel-good utopian agenda, while others like Rockefeller Foundation President Judith Rodin flew off to Europe to lead the World Economic Forum discussions about how to fight global warming, so many of her fellow plutocrats arriving in gas-guzzling private jets that they clogged the airports. Their hypocrisy runs deep and reveals it’s all about the power to run things. We err, though, to imagine they care about that. The gentry class, not the industrial class, is running America today and they don’t give a damn what we think. But, we’d better care because they’ll gladly have us all living in poverty if they continue to get their way.

The Corrupt Ways of America’s Plutocrats

Earlier this week, the Washington Free Beacon‘s superb investigator Lachlan Markay, ran another in his series of posts digging into the background of Nathaniel Simons and his Sea Change Foundation. We have covered this as well, of course, but Markay is the one leading the way in exposing this dark side of the fractivist movement and the elitist hypocrisy of a global warming warrior taking his mega-boat to work across San Francisco Bay every day.

Markay’s latest post provides further insights how these particular plutocrats work and it’s a window into the world of how America’s plutocrats undermine the interests of the ordinary American’s by manipulating money and using off-shore entities who can largely operate in secret and prevent anyone from knowing from where the funds that support fractivist and global warming causes really come. He details the various connections with Russian interests and documents connections that ought to raise a lot of eyebrows, although he stops short of saying it’s the Russian government that’s involved.

The whole thing is somewhat complicated because of the overlapping connections, but the support documents on which Markay relied make for especially interesting reading. If you Google the names of the connections and their addresses you’ll find plenty of confirmation that the Simons family, members of their investment companies, a Bermudian law firm by the name of Wakefield & Quin and several close buddies of Vladimir Putin all have intertwined interests and operate from the same office building in Hamilton, Bermuda. Does this mean the Russkies are funding fractivists, as many have alleged? Well, there’s no smoking gun, but there are more and more spent shells scattered about. Read it for yourself and you’ll see what I mean.

It certainly wouldn’t surprise me to learn certain Russian interests or even Vlad himself was  involved somehow given the attitude, self-interests and previous history of these corrupt former members of the Soviet nomenklatura and the country’s rather outspoken opposition to fracking anywhere outside Russia.

What more interests me, though, is something else; the total unaccountability of the Simons fund-raising operation and the way it has gone to great pains to hide where the money comes from. They are deeply involved in trying to influence US policy and direct events here with money they gather from who knows where and then spend tax-free in their interests through a charity known as the Sea Change Foundation. I’m no fan of Obama’s efforts to discourage charity in favorite of government but, if there was ever a case for clamping down on abuse by charitable organizations this is it. The Simons family represents America’s new class of plutocrats and they are abusing the system at the expense of the rest of us, who they view as mere serfs.

The Guises of America’s Plutocrats

Markay outlines some of the beneficiaries of this dark money in his post, but there’s more. Here are the recipients of Sea Change Foundation’s grants in 2012, the latest year for which there is published data: 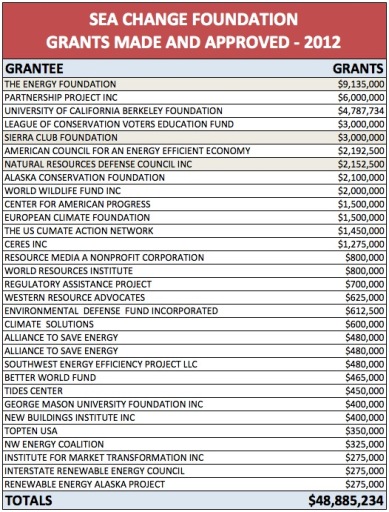 Numerous groups on this list are in the fractivist camp but notice how much money went to the Sierra Club and NRDC alone – over $5 million. We also, a few days ago, noted the $635,600 they gave to Environment America in 2010. Then, there is the Energy Foundation, which recycles and helps further launder Sea Change Foundation money.  It, too, receives considerable money from the Schmidt Family and Google Foundations, America’s newest plutocrats, who make it a point to fleece the taxpayers as well. Here is how the Energy Foundation spends it’s money on fractivism: 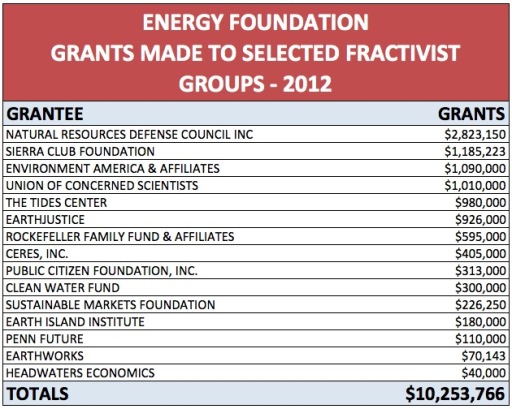 The NRDC, in other words, received another $2.8 million of this dark Sea Change Foundation money through the Energy Foundation, bringing its total to nearly $5 million. The Sierra Club got another $1.2 million, bringing it up to a total take of a little over $4 million. But, look who else is funded; Environment America (the phony pictures and data people), EarthJustice (the lawyers who handled represented the anti-fracking side in the New York home rule case), the Rockefellers (who also fund the NRDC), the Public Citizen Foundation (which, together with the Energy Foundation, NRDC and the Rockefeller Family Fund financed the dishonest Environmental Integrity Project), Earth Island Institute (which funds Energy Justice Summer), PennFuture (which joined hands with the Delaware Riverkeeper to challenge gas well permits in Central Pennsylvania), Earthworks (the people who engineered the Denton, TX ban using college students), Headwater Economics (the faux economics firm Jannette Barth loves to cite) and, of course, the Sustainable Markets Foundation (which finances Gas Free Seneca, the Flowback, etc.).

It’s all the same people doing the same things under different flags using the finances of Park, Rockefeller, Heinz, Simons and Schmidt; America’s new (and old) plutocrats. The money comes from the filthiest of rich in the filthiest of ways and is laundered so many times the corners of the bills have turned white, but it’s still dark money. The useful idiots from local fractivist groups are financed without a clue as to who is really supplying the money or who is really directing the fire.

This is the America we live in today, where second, third and fourth generation elitists use influence they effectively inherited to pursue utopian visions they have no intent to live under themselves. Nathaniel Simons may give up his boat for that daily trip across the bay to work, but he’ll replace it with something similar and the World Economic Forum will take place again next year with the same astounding display of extravagance countering everything proposed by these folks for us. Whether the Russians are involved or not is really beside the point because we’re already well down the road of a plutocracy without their help.

Those plutocrats are denying economic opportunity to places such as Southern Tier of New York and Wayne County, Pennsylvania, where gas drilling is frustrated by their direct and indirect actions. Statistics demonstrate both areas are falling ever behind their neighbors who have such opportunities. They are steadily losing ground as America’s plutocrats play the role of povertykeepers.