The legislation, which passed the House on Tuesday by a 163-38 vote, won similar bi-partisan support in the Senate on Monday where it passed 40-9.

Wolf, a Democrat, plans to sign the bill, which was the product of negotiations between both legislative chambers and his administration.

It authorizes 25 years of tax credits of up to $26.7 million a year with a cap of no more than $6.6 million per facility each year, starting in 2024. To qualify for the tax credits, companies have to agree to invest at least $400 million into constructing a new manufacturing plant and create at least 800 construction and permanent jobs.

A company would not be eligible for the tax credit until construction of the plant is completed and manufacturing begins.

Further, it encourages qualifying companies to employ workers from the local labor market, pay union-scale wages and benefits to construction workers it employs, and utilize carbon capture and sequestration technology when economically able.

Love it. This is the sort of grand compromise not possible in New York because it is dominated by one political party. Pennsylvania still has a future!

This is hardly a surprise, but very revealing, nonetheless:

NABTU commissioned these studies to better understand the important role that trades jobs play in the US economy and the differences in those jobs across various energy sectors. The results found quality job opportunities in oil and natural gas construction, and both union and non-union energy construction workers report that oil and natural gas jobs are better overall careers for them.

“The findings outlined in these reports demonstrate that today’s oil and natural gas jobs are better for energy construction workers across the country in both the short and long term,” said Sean McGarvey, President of North America’s Building Trades Unions. “The research confirms what our members tell us: the career opportunities for renewables are nowhere near what they are in gas and oil, and domestic energy workers highly value the safety, reliable duration and compensation of oil and gas construction jobs.” 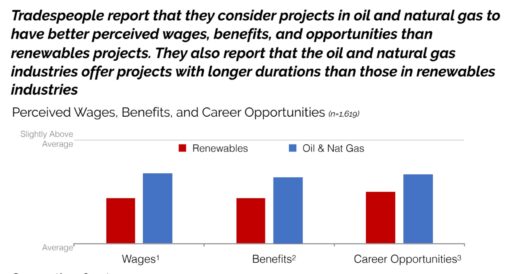 “These are not simply jobs, they’re careers, and built into these careers are educational opportunities that are not available to most Americans,” said Dr. Tom Kriger.

“Through the Apprenticeship system, our oil and gas construction industry training offers four years of learning everything in a skilled trade, and debt-free college credits with a family-sustaining job. That is why we call our Registered Apprenticeship the other four-year degree.”

“NABTU’s longstanding argument remains: ladders to the middle-class are vital in the energy industry and required in any successful workforce development plan,” McGarvey added. “We hope these studies provide a cautionary note for lawmakers, policymakers and activists, that oil and gas jobs are high-quality jobs, and as we rebuild the economy and transition, we need a plan to rebuild the middle class with family-sustainable wages, training and growth opportunities, and long-term and short-term benefits like the oil and gas construction sectors provide.”

Amen to that! These folks get it! Natural gas is one for the middle class!

The Best Energy Talk Ever?

I think it may be. Nick Deluliis has done an energy talk on YouTube that is just absolutely remarkable, so far ahead of the pablum, appeasement and PR-speak typically coming out of some industry giants. This blue collar straight talk is as good it gets in terms of how to fight; it’s just wonderful truth-telling:

Here is a bit of Deluliis he has to say:

When our enemies are out there taking glee over a canceled pipeline project or applauding the fact that an upstream producer went bankrupt or something along those lines please knock them off their elitist alter with facts. The facts are that this is has been, today,  and continues to be, just a manifest success…

Now, somehow, the elites have twisted the storyline into carbon becoming the doom of humanity. Quite the contrary. We are the salvation of humanity and the data prove it and this is data over decades. As carbon utilization goes up in society things like life expectancy go up with it…

When carbon utilization goes up individual rights tend to flourish…

Today, we basically, with the utilization of carbon, have eradicated famine the globe over and that’s something certainly to be proud of. So, to steal a soundbite from a former president, the one right before this one, renewables didn’t do that; carbon did that.

That’s something that we need to begin to communicate to a range of stakeholders who are out there.

How refreshing! This is true leadership!

This is simply outrageous:

Data released by the Small Business Administration show at least 20 environmental or conservation groups in Pennsylvania and New Jersey applied for millions in PPP loans of $150,000 or more. Others might have received loans, but the data don’t disclose names for loans less than that amount. The loans are designed to be forgiven if they are used for payroll, mortgages, rent or utilities. COVID bucks went to support this?

Environmental, conservation and land trust organizations say they needed the money because they rely on a mix of revenue affected by the coronavirus shutdowns: memberships, fundraisers, foundational grants, event sales and public money. They say revenue sources are expected to remain shaky or up in the air at least through the end of the year.

Some of the groups that accepted PPP loans include the New Jersey Conservation Foundation, the Wetlands Institute in Middle Township, Natural Lands and the Delaware Riverkeeper Network.

Write your member of Congress and let him or her know you don’t appreciate job-killing economic obstruction outfits getting economic recovery funds!