The DRBC Commissioners, in a stunning display of cowardice and obsequious attention to direction from William Penn Foundation shills, reconsiders a decision.

There, now that’s the DRBC (Delaware River Basin Commission) we know and expect –obsequiously bowing before the likes of THE Delaware Riverkeeper and her environmental cousin, the Sierra Club. In June the DRBC approved a request by New Fortress Energy to build a $96 million 1,600-foot-long pier on the Delaware River). After being hounded (and threatened) by Riverkeeper and the Sierra Club for months over that approval, DRBC voted last week to “reconsider” its earlier decision. Their true colors shine through. 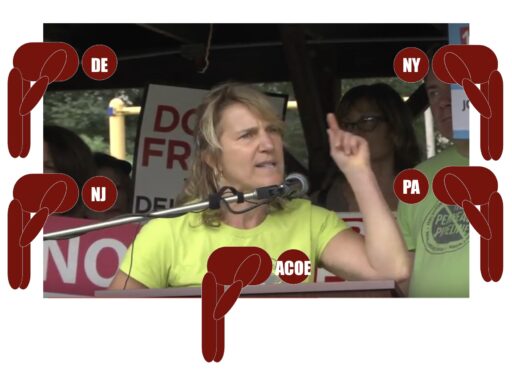 DRBC Commissioners from Delaware, New Jersey, New York, Pennsylvania and the Army Corps of Engineers bow to Queen of Obstruction Maya van Rossum and the William Penn Foundation that finances her.

The purpose of the New Fortress pier? To dock and load two ships at a time–loading them with either LNG (liquefied natural gas) and/or NGLs (natural gas liquids, like propane, butane and ethane).

New Fortress is building at least one, and up to five, LNG liquefaction plants in the Marcellus, then trucking the LNG (possibly using rail, if they can get it approved) to this dock facility on the shore of the Delaware River. We said the following in June when DRBC originally approved New Fortress’ request:

Although Riverkeeper and other so-called environmentalists kicked up a fuss, the DRBC at its regularly scheduled meeting yesterday voted to approve the plans by New Fortress. Frankly, we’re surprised–pleasantly so–given Riverkeeper’s apparent hold over the DRBC.

We should have known better. Someone at DRBC wandered off the reservation. But, now they’re back, doing the bidding of Maya van Rossum who fancies herself as THE Delaware Riverkeeper, and Jeff Tittel, paid protester with the Sierra Club:

The Delaware River Basin Commission has unanimously agreed to reconsider its approval of a second dock for liquefied natural gas (LNG) exports at a proposed export terminal in New Jersey along the Delaware River.

The decision last week comes after the Delaware Riverkeeper Network (DRN) filed a request for rehearing of a decision earlier this summer to approve an expansion of the project. New Fortress Energy LLC affiliate Delaware River Partners LLC wants to build a small-scale terminal to export LNG and liquefied petroleum gas (LPG).

DRN has worked in recent months to reveal information about the facility from various federal and state agencies that it said wasn’t properly shared with the public. The organization and other environmental groups contend that the company failed to share its plans for LNG at the proposed facility in Gloucester County, which would be called the Gibbstown Logistics Center. DRBC’s initial approval of the project included only plans for LPG export from one dock.

The DRBC has said, however, that it has jurisdiction only for dock construction and river dredging, not cargo. The environmental groups are primarily concerned about plans to move LNG in and out of the facility. Several other approvals are pending for the project that are also being targeted by the groups in their efforts to stop the facility from moving forward.

The pier project is officially called the Gibbstown Logistics Center Dock 2 project. Following the DRBC vote on Sept. 11 to “reconsider” their earlier errant decision, THE Delaware Riverkeeper (Maya van Rossum) issued this press release signaling to DRBC lackeys her displeasure in having to work so hard to get them to do what she told them to do in the first place:

On July 11, Delaware Riverkeeper Network (DRN) filed the hearing request, stating that the DRBC violated its governing Compact and regulations when it approved the project without having “full information on impacts on water resources to the Basin,” and that the DRBC failed to “address the full scope of impacts” including harms to water resources from the construction and operation of the project, as well as its intended use for exports of Liquefied Natural Gas (LNG).

Prior to the hearing request, DRN submitted three comment letters to the DRBC, testified at the DRBC’s June 6 hearing on the draft docket, and was present at the DRBC’s business meeting on June 12. In these letters and testimony/comment, DRN urged the Commission either to: 1) disapprove the draft docket; or 2) withdraw the draft docket until a comprehensive analysis of potential impacts, including those reviewed by other agencies, was complete. The Commission’s decision to approve a docket effectively denied these requests.

“While we are glad that the DRBC Commissioners unanimously agreed that our hearing request should be granted, we should not have had to go to the time or expense to make this request. We had asked the DRBC at the hearing prior to their granting of the LNG docket, and urged during the meeting where the docket was approved, that a hearing be held before a decision was made. The Commissioners and staff had every opportunity to get this right and grant a hearing before the decision was ever made. The Delaware Riverkeeper Network is a community supported nonprofit organization and to force us to go to the legal cost, time and expense to make this request is simply wrong. But nonetheless, we did file the request and the Commissioners have granted our request and so we look forward to the opportunity to make our case that the DRBC docket for the Gibbstown LNG facility should be withdrawn,” said Maya K. van Rossum, the Delaware Riverkeeper and leader of the Delaware Riverkeeper Network.

“Delaware Riverkeeper Network’s successful request for this terrible proposal to be revisited is welcome and reflects the significant impacts that can occur if the Gibbstown Terminal is approved. The concept of bringing LNG into the Delaware River Basin hundreds of miles across Pennsylvania and New Jersey, perpetually transloading to ships this highly dangerous and flammable liquid in Gibbstown, and shipping it out down the Delaware will require harmful dredging, environmental and species destruction, and endangers public health and safety. A comprehensive analysis was not done by the DRBC and we are stepping up to ensure no rubberstamping of such a dangerous proposal,” said Tracy Carluccio, Deputy Director, Delaware Riverkeeper Network.

The Gibbstown Logistics Center is a proposed deepwater port, to be built in Gibbstown, Greenwich Township, Gloucester County, NJ along the Delaware River. The port would be located on the former DuPont explosives manufacturing site known as the Repauno Plant. The applicant, Delaware River Partners, LLC, wants to use the site to receive Liquefied Natural Gas (LNG) by truck and eventually rail from points west (including the Marcellus shale region in Pennsylvania), and export it by ships down the Delaware River for sale overseas. The terminal would also use the site to transport natural gas liquids (NGL) which would be offloaded to tanks and an underground cavern located on site that was used for explosives by DuPont, and then shipped out on the river.

What a sick attempt at scaring the neighbors with outright lies. When is the last time you heard about LNG catching fire and exploding–anywhere, including at a port facility? That’s right: NEVER.

Not to be left out, the titillating Jeff Tittel from the nutty Sierra Club issued his own press release. He can’t be upstaged by Maya now, can he?

“DRBC has agreed to hold a rehearing on the Gibbstown LNG case. We believe DRBC were wrong when they had the first hearing. They completely failed to have an adequate public hearing without proper notice. The public also did not have enough time to comment given the size and complexity of the project. New Fortress has been hiding what they have been doing and this entire process has rushed and behind closed doors,” said Jeff Tittel, Director of the New Jersey Sierra Club. “Now with a rehearing, all of the facts will be on the table which and the DRBC should reject this disastrous proposal for an LNG facility. It’s too important for the safety of the public and environment.”

“The rehearing announcement from the DRBC comes just a day after DEP decided to side with polluters and grant Delaware River Partners their Waterfront Development Permit again after suspending them. DRBC is doing the right and the DEP should listen. We don’t know how the DEP could give this project a Waterfront Development Permit given all of the pollution and environment problems this project could bring. Development in this area will cause runoff and make flooding much worse. It is not just an LNG terminal, they will be storing other liquids and gas and on site,” said Tittel.

LNG facilities are extremely dangerous to the nearby communities and can have wide-reaching environment consequences. Toxins from the site can leach into the ground from the underground tank. These toxins can threaten the Delaware River which provides drinking water for millions of people in Pennsylvania and New Jersey. Since the River is tidal, a spill or explosion could impact our drinking water supply. Sensitive ecosystems like wetlands along with endangered species like the Atlantic sturgeon could also be impacted.

“Delaware River Partners will bring 3.5 million gallons of LNG a day to the port from truck or rail, this is equivalent to 2 billion gallons of natural gas. These numbers can be greatly expanded if New Fortress gets an export license. Transporting LNG by rail is not legal yet. These trucks will be bombs on wheels, maybe hundreds a day going to the site, traveling miles and miles in all kinds of weather, through our neighborhoods and along our highways,” said Tittel. “The potential blast zone from an explosion will threaten residents all along the way. There is also the concern that in the future it would lead to them wanting to bring in pipelines to transport more fossil fuels.”

The NJ Department of Environmental Protection have not given the DRP their 401 Water Quality Certificate, and the project still needs to be approved by the Army Corp. and FERC.

“The responsibility and duty to protect us and the Delaware now falls on the DRBC. They have a second chance now. They must look at the impacts it will have on the Basin and reject the proposal altogether. An LNG port in the Delaware will not only cause catastrophic damage to the river and surrounding area, but prompt more fracking, and more use of GHG’s. We ask the DRBC to protect our safety, our health, and our environment by rejecting the LNG port in Gibbstown. It is too important for too many people,” said Jeff Tittel, Director of the New Jersey Sierra Club. (3)

Do you know how many “bombs on wheels” trucks hauling LNG around the country there are in a single day? From what we gather, there are so many it’s uncountable. And when is the last time you heard or read about an LNG truck exploding? That’s right: Never.

Don’t fall for the lies spread by van Rossum and Tittel. They’re being paid to do what they do.

We just hope there’s enough of a spine left at the DRBC to stand up to van Rossum and Tittel and reaffirm their earlier approval of the Gibbstown Terminal project.

3 thoughts on “Gutless DRBC Commissioners Bows Down to Delaware PovertyKeeper”